Beware of this killer!

I am a fan of high mileage cars, at least for my daily driver, as they have generally proved their reliability & are usually considerably cheaper to buy as many people still think the materials used are the same as those in the 50s & 60s. Rarely do you come across modern cars with actual engine wear unless previous owners have skimped on maintainence.
My last two cars cost me very little to buy & run, my Volvo had 530,000 kms before being scrapped (it needed 2 tyres, front brakes & some ball joints for the CT) as I already had another big car. It was replaced with a Peugeot 307SW ex taxi which has given me almost 3 years of trouble free motoring & the last CT just had an advisory about tyres. It has now exceeded 400,000kms.

But now it is dead… 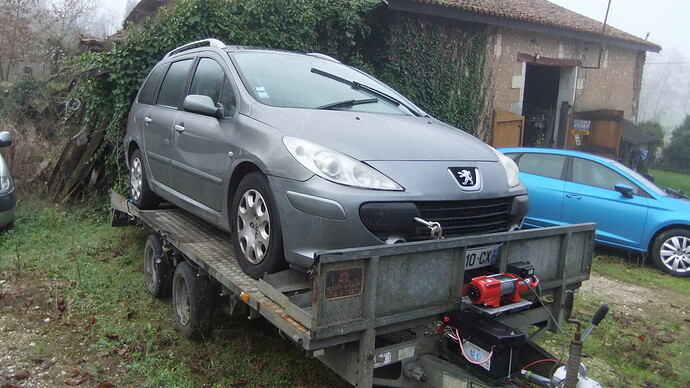 I had lent it to a friend for a day & received a call to say that it had broken down & that the warning lights (all of them) had flashed on & the starter motor was cranking, then black smoke had poured out from under the bonnet. My friend quickly stopped, popped the bonnet (always make sure you know how to do this) & disconnected the battery. Fortunately Peugeot use a quick release terminal on the live so no tools required. 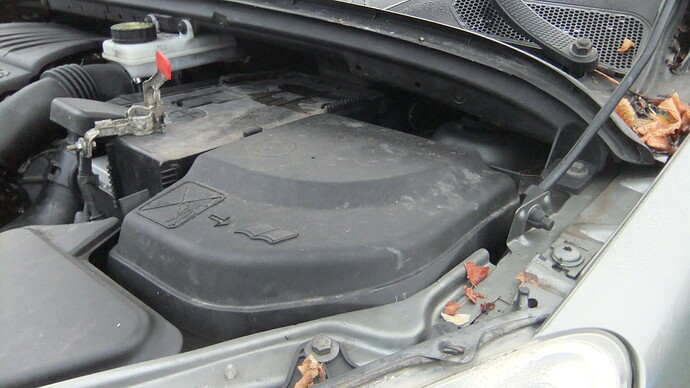 This might not always be an option so if in doubt leave the car, replacements are available.
Fortunately the smoke stopped & a later examination revealed the problem.
A major short circuit in the engine bay fuse box had caused a small fire which burned through much of the major wiring loom feeding the car’s various computers & damaged the multi pin plugs.

So why did this happen?

The little B*****s made a nest under the cover of the engine bay fuse box & their family lifestyle caused the short. 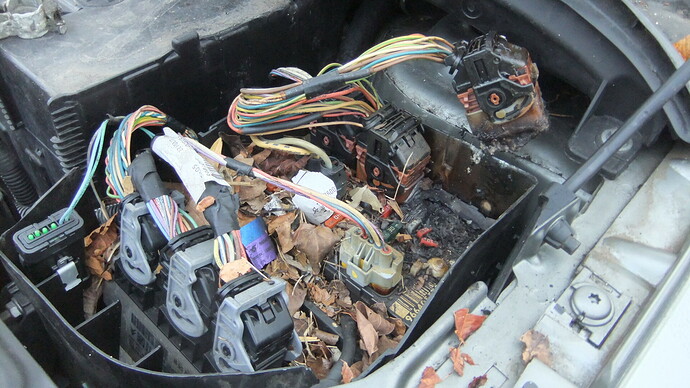 It is not really economical to repair so the car will now go on to an honourable retirement having not let me down.
This could happen to the newest of cars too so what can you do? I have found a special spray that is said to deter mice from eating the insulation. Apparently the plastic contains corn starch which mice like.
I have ordered a few cans of this - https://www-amazon-fr.translate.goog/K2-Spray-Protection-anti-martres-martres-fouines/dp/B01FT6KDZG?_x_tr_sl=fr&_x_tr_tl=en&_x_tr_hl=en&_x_tr_pto=sc

Thanks for the link Mark.

I’ve the same problem. I popped the bonnet of the C350e we have and found a mummified furry thing under the bonnet. Being of a sensitive nature I called my wife to remove it

I inspected they cables near it’s Waterloo and found it had nibbled the protective sheath over the cable bundle but not any of the cables. I installed two rodent repellent ultrasound/ flashing light thingies where the Merc lives and hoped for the best. About two months later the car started flashing up a “auxiliary battery problem” message and turning off hybrid mode. If I switched off and switched on again it seemed to reset itself so I assumed it was a dodgy connection somewhere and I noted it for attention at the next service.

So two weeks ago, three days before we were to use the car for a trip to Cherbourg to catch the ferry I dropped it in for a service and mentioned the issue. Later that day the workshop manager called me and said that when they took the auxiliary battery out for a look they found the high tension cable from it to the electric motor had been gnawed. He was shocked (no pun intended) because the battery is in the boot and there’s no obvious way for a rodent to get in. He couldn’t release the car in that condition for safety reasons, not that I’d be too keen to have high voltage sparks around the petrol tank anyway. He said he’d look at the cable’s availability and get back to me.

Later on he called and said there were no cables in France, it would have to come from Germany. I’d explained that we needed it for a trip in three days time and he said that under normal circumstances and given we were approaching the weekend it would be five or six days before she was repaired. He then said (which amazed me) that Mercedes Assistance were willing to pay for a taxi to drive the cable from Germany to Frejus where my car was, a bill of several thousand euros. In the end the timing didn’t work out and we used another vehicle but I was extremely impressed by MB customer service.

Two days ago the other vehicle started throwing up error messages, ESP out, Parktronic out, ABS out, etc. etc. so I have her booked for diagnostics on Thursday and I hope it hasn’t been nibbled as well

As an aside, my daughter did a bit of research and found that Mercedes cables had/have some sort of soy extract or other in the cable plastics and that they are considered quite a delicacy in the rodent world. So your spray will be very useful. I’ll spray everything in sight.

Interesting! Our mice problem is in the house where they regularly chew cables leading to downlighter in ceiling. I wonder whether the spray would be suitable? It says it is inflammable, but presumably only when freshly sprayed so as long as light off for a while after should be ok?

How wet should one spray this? All over and under every cable, lift the main engine electric controller box cover in your photo and spray everywhere? Use the whole can per spraying session? How frequently should one respray?

I was warned on my identical 207SW (same car is 307SW in France) that the main electrics controller was likely to fail, with a 50% chance of being able to be reset, sometime in the next 2-12 months. (It had just failed to start whilst out shopping one afternoon.) IIRC no damage by rodents could be seen and it wasn’t garaged so now I’m wondering. The car did fail after 15 further gently treated months at 18.5 years old last month, but of something else. Various bits were failing, not worth repairing, but it was time.

If anyone has one of the same reliable Peugeot available, ideally a bit younger, regardless of mileage (as it seems very old age is more of a killer than mileage), please PM me (or post) if it’s for sale. I think @captainendeavour might have the same car?

Are mice a special problem in France? We’ve always felt quite safe just parking our cars outside without any fear of rodent attack. We did once have a caravan that has gas and water pipes chewed by rabbits, but that was different.

I’m intrigued at the high mileage of the 307. I had a 307 SW HDi for a while, and although the engine was excellent, the running gear and electronics were atrocious. It was the last French car I ever owned, having driven Citroens and Peugeots from the early 90s. Even the local pug dealer gave up the franchise in favour of Kia.

Had a Friend who suffered this. I found for him a small sonic deterrent device that wires in and it seems to work well.

For the last dozen or so years, the composition if electric wiring’s plastic casing is maïs based, therefore more attractive to mice.

They are looking for nice, warm, snug places to over-winter. Cars are a favourite and there are plenty of things there for the rongeurs to ronge on.

There are repellent sprays available from bricolage shops, some say they work. Another option is to bait by the tyres when you park up for the night.

‘Bait’ I’m leaving vague you can decide yourself and I don’t get blamed condoning premature mortality!

Now there’s an idea, I have nine cats so I could tether one to each wheel and rotate them

Do you you contract them out

Mercedes cables had/have some sort of soy extract or other in the cable plastics and that they are considered quite a delicacy in the rodent world. So your spray will be very useful. I’ll spray everything in sight.

The Mercedes garage I go to in Germany, it is the main one in the Black Forest, has prominent displays of anti-marten spray all over the place, apparently they are a major pest and problem.

Thanks for that info Vero. I wish I’d known sooner.

Thanks, I’m going to have to cover everything in it. A few nibbles in the wrong place could write the bloody car off.

A few years ago now, the car I had stored in my holiday home garage got ‘nibbled’ - various electrics chewed, car wouldn’t start and power hood not functionng - over 2500€ later, and the culprit was a rat that had got into the garage and had a veritable feast on the car’s electrics - oh the joys of the country - thanks for the recommendation Mark, as have been nervous ever since!