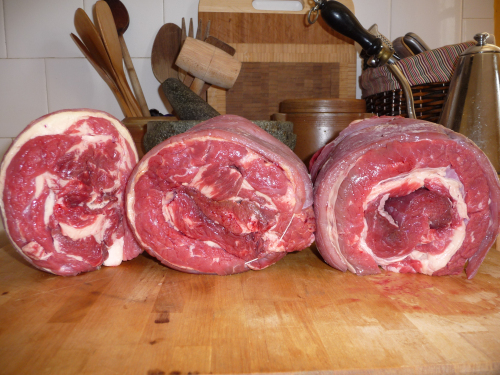 I love beef. Trouble is, we haven’t yet found a good local supplier near
to us. They’re around, but tend to sell in large quantities, and
frankly bulk steer is not my thing – you can have too much of a good
thing you know.


So, for the moment, I buy from the local LeClerc supermarket. – No


food-crime committed there I feel.


In their favour, the local supermarkets buy a large amount of their


fresh products locally, and the provenance of the food is quite easy to


trace- a lot of the beef I buy is from herds around Parthenay, which is


about 25 miles from here – we’re in the heart of goat county here. We


three suppliers of local produce to the local Le Clerc at Bressuire.


Can’t get closer than that eh?


That said, I am continually confused with the differing cuts that the UK


and France have to offer.I am not overly struck on their small roasting


joints, where the “fat” is wrapped around from another part of the


I was recently loitering around the meat counter at aforesaid


cut that is used for quick grilling or BBQ treatment.


As I gazed on, the penny (or centime?) slowly dropped that he was indeed


cutting up a brisket joint, but selling it “flat” if you see what I


– How would he feel if he rolled one entire piece of “potrine” tied it,


and then cut it into three good sized English style joints?


The whole work area stopped dead. Much discussion ensued ( I was


politely excluded from the heated arm waving and the ever obligatory


Gallic shrugging.) Shortly after, the deal was struck and I was allowed


Here’s how I prepared one of them.

SALT AND PEPPER TO SEASON THE MEAT

A SLOSH OF SHERRY, RED WINE, AND STOCK TO MAKE UP TO 250ML


METHOD
1. Chop up the vegetables – chunky is what is needed as they act as a
“bed” for the meat to sit on. Too much liquid in this dish will make it
sloppy and tasteless.
2. . Rub the salt and pepper well into the meat.

3.Fry the brisket to brown all over in a sturdy deep casserole dish – it

allow it to come up to room temperature. Remove from the pan and set

4. De-glaze the pan with your chosen liquids and allow to bubble and

5. Place the vegetables into the bottom of the pan and place the meat on

the top of them.

6. Bring the pan back to the boil, covered, and place immediately into

7. Reduce the heat to 165 degrees – For Aga owners, place the pan into

the roasting oven on the floor for 20 minutes, and then put the pan

(also on the floor) of the simmering oven

8. Cook for 3-5 hours depending on your oven and your taste – the longer

it cooks, the more succulent it will be – it can be cut up with a spoon

when it has a long slow braise.

9. Remove the meat and vegetables from the pan and pour out the juices.-

skim away the fat.

10 Serve the meat and vegetables with the jus as it is, or if you come

from Wales, make a thick sticky gravy by thickening the reserved fat

with a tablespoon of flour, cook to break down the starch and add the

juices from the pan. Cook on a rolling bubble to let the gravy thicken


TO SERVE
My ideal is lashings of mash – potato or other roots, plus some dense
doughy bread to mop up the gravy. Heaven. 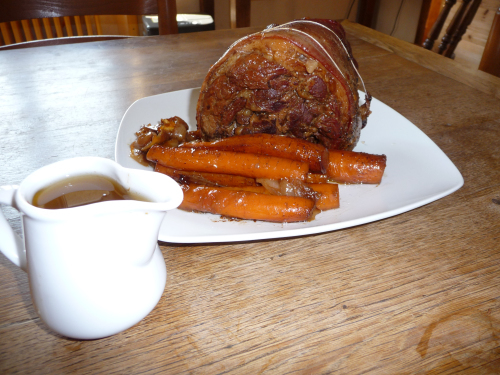