I really didn’t think it was possible, but they appear to have found an even more evil and despicable person than Patel to deal with the immigration issues.

It really is a race to the bottom to see who can stir up the fascists the best. 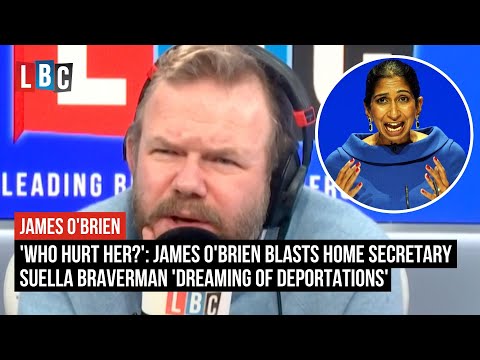 Braverman would cheer as the Jews were hauled off to Auschwitz .

Bevan was right, lower than vermin.

I really didn’t think it was possible, but they appear to have found an even more evil and despicable person than Patel

What I find incredible is that she professes to be a buddhist.
https://www.independent.co.uk/voices/suella-braverman-illegal-immigrants-rwanda-speech-b2195788.html

Certainly don’t want to play up racial stereotypes, but we currently have two leading(!) politicians of African descent trying to introduce the sorts of ultra-right wing, deregulatory and discriminatory policies that are unfortunately all too common in sub-Saharan countries. All that’s missing for the UK to become an African style state is the emergence of a big male strongman - no that’s not you Boris -back in your box!

I fear that Gove has a plan…

she professes to be a buddhist

There are many people in Asia who profess to be very Buddhist, even as they stick gold leaf on a stone statue whilst praying for wealth and success for themselves. Made me sad, when there are so many poor needing even a morsel of bread.

And I bet she a voracious carnivore too.

I don’t think Braverman is any more evil than Patel, she just (supposedly) has the knowledge of law on her side and knows how to manipulate or re-interpret it to get her way.

On the subject of being a Buddhist, she belongs to the Triratna Order that has had a reputation of sexual abuse since I was a child.

Name one religion where the organisations involved didn’t like to sexually abuse children.

Sadly, it’s almost a case of “name one organisation which didn’t…”
There’s more and more coming out into the open… in almost every area of life…

So no need to wait.

He has some of the same background as the departed BoJo, attended Eton, on a scholarship, and then onto Cambridge for a double First in Classics and History. He also has a PhD in Economic History, his thesis being ‘Political thought of the Recoinage Crisis of 1695 to 7.’
No understanding of the political thought of the repercussions of his mini budget though!

What has it come to when we are having to put our faith in Michael Gove?

Gove has a plan…

I-n with you Brian, The Grovester is plotting. Even Sarah Vine keeping a beady eye on him.

This woman is totally mad!
She was an Erasmus Scholar and studied Law at the Sorbonne, obtaining a degree in both French and British Law.
She then went on to vote Leave and was the first Chair of the ERG Group.
She gave an interview to The Daily Telegraph saying that she believed that farmers could do more to recruit British workers, use more mechanisation and pay better wages.
Farmers have to pay the minimum wage and skilled workers can earn much more than that.
There was a farmer from Worcestershire who said that there was 3 % unemployment in Worcestershire
with 800 being unemployed. He needs 750 people on his farm!
Rural jobs are always more difficult to fill because of the poor transport and seasonality makes it unattractive to UK workers.
This is the woman who is in charge of the Department that issues visas for immigrant workers, so God help the farmers, who are having to plough back their crops that cannot be harvested for lack of workers.
Brain as big as a planet and no common sense at all, and more importantly, not willing to listen and understand the realities of this problem.

At the moment, seeing who are the chosen ones in government, I don’t mind being called racist, totally agree with it.

May i point out that not many people live in the country they live in towns. Its poinless offering
seasonal work at a rate which after transport or accommodation costs will not pay for improved life.

These farmers provide mobile homes for foreign workers (usually) to stay in. Would it be an idea to have a minibus to pick up British workers who have no transport? A factory where we used to live used to do this and it worked very well.

Brain as big as a planet

Not only that we have two women of Asian extraction as well.
It tastes of the ‘Hoist the Gangplank, we’re all Aboard’ mentality.