Buying a Car When You Don't Speak French

Yesterday I bought a car. Not only is it the first car I've bought in my life, it's a French car, bought in France. Like many things in this new world of mine, where I don't speak the language, buying my new voiture wasn't easy. I had to enlist help.

When friends learned I wanted a car, they all had suggestions. The most prevalent one was "don't buy a French car." Sorry, but that's just what I did. The next tip was "don't buy from a dealer." Yep, I did that too.

Buying a car at all, I am double handicapped. I have never bought one for myself, by myself. My first car was a hand-me-down from my Mother. My next cars were arranged by my brother who owned a VW dealership. I drove VWs for years. Then my ex bought our cars. If he told me he was car shopping, I'd say: "Tell me when it's over, and by the way, I get the new one."

Of course, not speaking French is my second handicap buying a car -- a big one.

Uzes has no car dealers, so I turned to Leboncoin. Car shopping online became my passion. I looked at cars constantly. But when I'd be interested in one, I'd just sigh. There was no way to communicate with the seller. Email didn't work. They didn't reply. If I telephoned, I could write out a script in French to tell what I wanted, but their response was unintelligible to me. Going to Nimes to car shop was a consideration, but finding someone to drive me there who knew anything about cars just wasn't happening.

Finally I threw money at the problem. A young French man who I've met several times at one of the cafes told me he'd help. He needs money. I needed a car. It was a perfect match. Except that he wasn't quite on the same timeline as me.

After several weeks of back and forth emails to "JJ" with links to cars on Leboncoin, he finally saw one that appealed to him. It was with an "independent" dealer in Remoulins. After a trip to see the car, then back to sign the papers, it was mine.

JJ has also agreed to go with me to the "préfecture" to change over the title and help with whatever else is needed. I have no idea about insurance. The garage insurance runs out on Monday. Surely that will be solved, too.

This is all to say that, nothing is easy in France. But as the Beatles say: "I'll get by with a little help from my friends."

Here's Lucy! With her shiny red body, she's the female version of "Lucifer". While I'm on a Beatles kick: "Lucy in the Sky with Diamonds." Now for that diamond-encrusted steering wheel cover. Leboncoin? 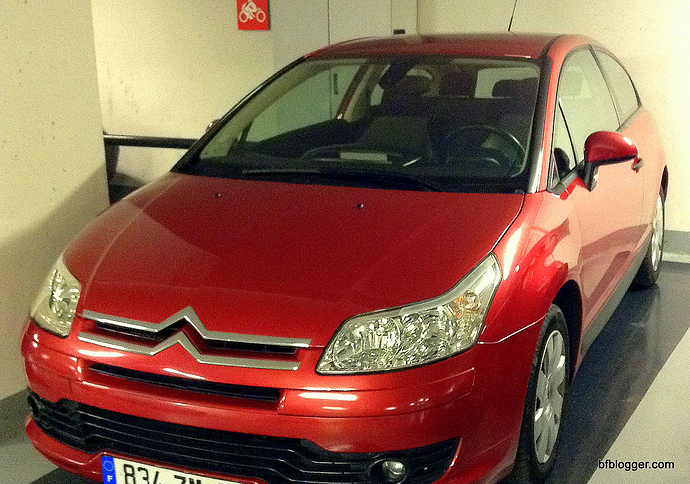 Glad you had good experience. Seems so far that mine is working out too. Just this last hurdle of car insurance. What about a European drivers license? Do I need it? My South Carolina license is good until 2015 and I'll renew it when it expires.

Hi Deborah
I bought my French car without any French and from Australia!
The Peugeot dealer here in Pamier, with very little English, was very responsive. I guess I put a lot of faith in the fact the car was last year’s model and only 5,500klm on it. I was lucky I knew exactly what I wanted too. Some friends looked it over for me, and I transferred the funds. Voila! The car was mine and the dealer met me at Toulouse airport when I arrived in from Aus. Altogether, a very good experience, and from the red tape I have struck since living here, an incredibly simple process.