So sad…he will be sorely missed. 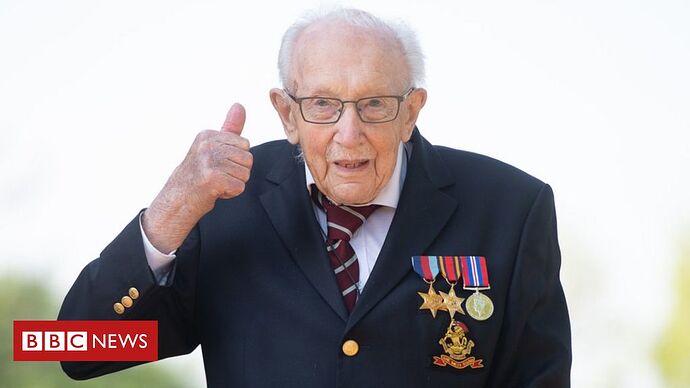 The World War Two veteran raised millions for NHS charities and is called a "true hero" by the PM.

Oh that is so so so sad when he did so much for everyone’s spirits at the beginning of the pandemic and through the first lock down, as well as financially of course with all that money he raised.

he will be sorely missed.

Did you know him?

Did you know him?

The same slightly sceptical question occured to me. I don’t much like British red-top hagiography.

The same slightly sceptical question occured to me. I don’t much like British red-top hagiography

What will you be remembered for?

What a joy this forum is at times.

Sir Tom will certainly be sorely missed by his family and friends.

I can well imagine that such a person will be sorely missed by many, many people (even if they did not know him personally).

What will you be remembered for?

Nothing that would merit headlines in the Sun or the Daily Mail, John.

Lest we drift off into the general beatification of Captain Tom.

Keep in sight of the fact that, had we not been so poor at keeping a lid on Covid over the winter Captain Tom might still have been alive and kicking.

Is Downing street going to have the flags at half mast for the next 108,012 days to commemorate the other lives lost?

We need to be more like Perth - although to do so requires one case to be a big thing, not drowned out in millions of others. 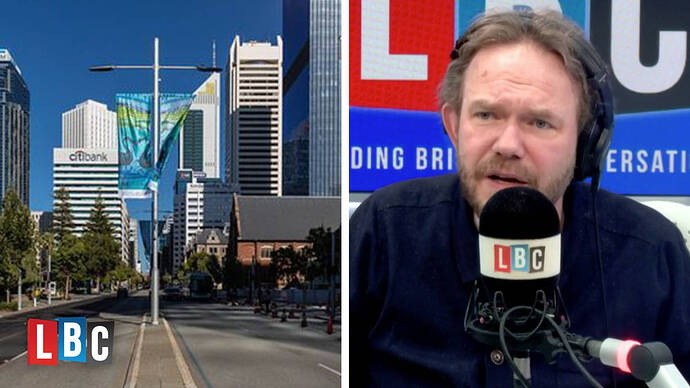 James O'Brien gobsmacked over Perth's reaction to one Covid case

This is the moment James O'Brien was left gobsmacked by Perth's reaction to a single Covid case.

Lest we drift off into the general beatification of Captain Tom.

but, on a personal note… I have used “Sir Tom” as a “good example” of how my situation/age/health/whatever should not stop me from getting on and doing something useful. (telling myself to stop whingeing… and get on with life…)

I think many other ordinary folk have been inspired/encouraged by this elderly gent…
and, of course, he is not the only one who has “done some good”… there are so many others… helping quietly behind the scenes or in public… and each will be missed/mourned when the time comes.

I don’t think anyone is beatifing him Paul ,it’s just sad that someone who did something iconic has passed away of the very thing he was helping to ‘fight ‘ against It was my first thought that it proves how we have lost control of this virus,to loose someone like that too it

Many other folk (of all ages) are in a similar situation.

Besides the snobbery in that statement,he has made all the front pages ,hopefully some of those you will approve of

I don’t think anyone is beatifing him Paul

Seems he was suffering with pneumonia

The time-line is a bit confused from the general reports - I’m not quite clear whether he had signs of pneumonia, went into hospital, got tested (which is routine on admission, especially with respiratory problems) and was found to have Covid…

Had pneumonia (which, let’s not forget is pretty serious at 100), went into hospital and became  Covid positive there.

I’ve seen more along the former lines than the latter bit, as I said, it’s unclear.

I don’t wish to denigrate Tom - he got off his bum and did something which is more than most nearly centenarians would do but the nearly £401 million was a bit of an accident caused by social media amplification (he just wanted to get maybe £1000).

And I can’t help think that the government is happy for the news story to push the fact that nearly 110,000 have died according to official figures (and probably more in reality) off the front pages.

I am, however, totally with Stella that anyone’s death is a sad moment. John Donne had it right nearly 400 years ago:

No man is an island entire of itself; every man
is a piece of the continent, a part of the main;
if a clod be washed away by the sea, Europe
is the less, as well as if a promontory were, as
well as any manner of thy friends or of thine
own were; any man’s death diminishes me,
because I am involved in mankind.
And therefore never send to know for whom
the bell tolls; it tolls for thee.

They were laying it on a bit thick this morning.