i am sure many of you have been in this position so I am hoping that I can pick your brains..

We have a Ford Focus Cmax which we can just about squeeze our family into.. we are moving over to France at the end of June and will need a car to transport us obviously.. We want to buy two French cars because we will be living fairly rurally and will need two. However, it feels slightly like a chicken and egg situation. We don't have the spare money to buy a car before we have sold our one. Do we try and get ripped off and exchange it for one at LHD dealership and then weep into our empty purse.. buying another one later down the line in France.. it will cost money to have to come back to the UK and sell it here at a later date (plus time if it doesn't sell privately quickly).. do we keep it forever in France..

Anyone who has any good tips, I would be tres grateful :-)

my hubby took a contract in London - he's in IT, long story but basically I couldn't manage on my own full time with the 2 kids after an op and a newborn and we decided to have No 3 in quick succession (yes mad) No 3 is now 15m old. The elder 2 were born in France but Maisy was a Camden baby. Get your vet to give your cat half a piriton - our Stanley (the cat) slept all the 12 hour journey to our new home. Wish it worked with the girls too ;)

Our first move cost £4500! This one is a lot less thank goodness (hardly any furniture - just a bunk bed and a cot) but far too many toys/books and kids paraphernalia as well as clothes and goodness knows what else has filled those 20 boxes but something has!

We're based in Herault - near Pezenas normally. Where are you moving to/from?

Wow.. why did you come back to London for 18 months? Where in France are you based? Three kids does slightly tip one over the edge I must admit.. my third (15 month old) is driving me up the wall - our quote for moving is £3000 and that's without getting cardboard boxes.. I have a semi feral cat who I am going to have catch in order to get her rabies vax done and then get an extra vehicle to get them all over to France with the kids in another one.. I would normally advocate drinking wine in an effort to self-medicate for the stress, however as I am currently experiencing a two day hangover which has played havoc with my organisational skills.. I would strongly desist!

good luck Chloe - if it helps I'm in the middle of moving madness too, we're going back to France after temporarily being in London for 18m! We came here in a car with 2 kids and are going back with 3 kids and a van! I've just run out of packing boxes and as fast as I pack the kids get it all back out again...arrghgh. Thank goodness our cat is already in France as I can imagine having him being sick everywhere just to top me off!

Hi, I started to send you an email and then realised I was waffling so stopped.. I think we shall keep the car for now Katherine - however, if closer to August we are in the position to sell and you are still looking I shall contact you!

I think that this is what we are going to do Suzanne.. I am starting to find this whole darn moving thing a tad stressful. We have a really sick dog who has just come out of a week at the vets and who appears to be very stressed in our household and is getting bullied by one of our cats.. so we are going to have to rehome her to a home where she doesn't spend all day standing in the middle of the room trembling. Moving costs are escalating and.. oh bloody hell I could go on for hours... I shall shut up.. Thank you all for your very helpful and encouraging comments... we shall stick with our car.. although... 135 euros just for the COC.. :-O

keep your RHD car - if you want to sell it in the future then take it back to the UK to sell, but don't rush now into changing your car. It is easy with the peage badge - we came over with a RHD car then found a decent LHD car in the UK at a good price so we changed it then. On the look out now for another LHD but won't buy unless its a bargain which probably means buying from an individual. It depends on the type of car you are after - for expensive cars then you can get a bargain in the UK but for family cars like a 7 seater then the LHD UK dealership prices now look similar to buying with warranty from a french garage.. as they are so sought after I guess! So I am thinking I might as well buy in France.

Hi, I live in Vietnam but have a house in Brittany where I will be this summer then relocate to the UK in late august early september?

I am looking to buy a car! (left hand drive Uk type as I already have one in france.... where are you moving to in france/

do you want to email me on katederuty@gmail.com to discuss this further?

Get one here - http://www.aprr.fr/fr You're looking for a 'telepeage badge'

When I was pregnant I was effectively marooned in Chamonix as there was no way I could lean across the passenger seat to pay the tolls, our little 'beep' saved me.

LHD dealerships are very expensive. We have kept our UK RHD Mercedes Estate car as we live in the country and do not do a lot of miles. The only problem is being behind a tractor if you do not have a passenger you can trust.

It was not difficult to re-register here in France.

Catherine's "clacker" is a gismo which you can get at some of the peages and larger aires. It enables you to drive through the peage without having to go through the problems of having to get out and take a ticket or pay. You only get charged for the months in which you actually use it.

What's a 'clacker' when it's at home?! I presume it's not this?! Interesting if that's all you need to get through the peage :-))) 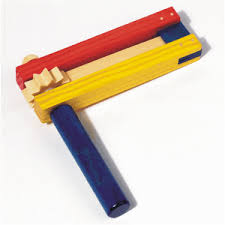 we face a similar conundrum, in that our ancient UK car needs to be sold off and a newer French one bought; I am horrified by secondhand car prices in France but they're still cheaper than the ridiculous prices asked by UK LHD dealers. We have decided to buy in France and take the UK car back next time we go there.

I'd be interested to hear views about buying privately vs from dealers.

One cautionary note - if you cannot get the certificate of conformity then you could be in for some very large bills and it's all at the discretion of the inspector when you apply to register it. They can make you change things like windscreens, seat belts, air bags, lights etc. I did a lot of research into this a few years back when I moved from the USA - my wife really wanted to keep her Mercedes but there was no way it could ever conform without major expense. And that was for a car built in Germany and LHD.

I'd keep it. Even some of my French friends are now buying RHD's in the UK as they are so much better value.

Invest in a 'clacker' for the motorways so that you can get through the peage without having to struggle with the toll booth if you are on your own and you're away!

Keeping the RHD does seem to be the way forward in terms of ease... Thank you all for your comments!

Yes, the RHD is a pain at times here but in a rural area it's not been a problem. we don't do huge distances or motorways much and we really are careful at one or two junctions locally which are dangerous in a RHD car with out a passenger to do the looking! And, as I said above, it is worth it for the money saved.

Not sure how easy/expensive it is to get certificate of conformity from Ford but it was a doodle, and free, from Renault. Perhaps consider that when buying the van. Every penny counts especially after the cost of moving house and before you manage to get child benefit set up - it's all a bit tight to start with.

Not such a bad idea. We have still got a RHD car, reregistered over here as it is so much cheaper to buy in the UK. Will be buying a van soon (hopefully) but it will probably be RHD, then registered here. The only possible issue is overtaking but as it's all narrow country lanes, you wouldn't be able to over take in a French car either - besides, who is in that much of a hurry.

We moved here 6 months ago and travelled from the UK in our UK car. After 4 months we decided we were staying, and decided to buy a second hand car in france and sell our own one either to an expat here or by taking it back to the UK. After some research on second-hand car prices and ferry prices and such like we realised we were going to spend a lot of money selling our car in the UK and then, for the amount of money from the sale, end up with a smaller, older, higher mileage french one. Much as we'd rather drive a LHD car here in France, financially it just didn't make sense since we already had the UK car here with us.

A few weeks ago we did the reregistration which was easy (despite the experience some have had). In total the whole re-registration of our UK car in France cost us 226.50€ (for the carte grise) and 24€ for the number plates. That's all. We didn't have to pay anything else. The conformity certificate was free and obtainable with two clicks on the Renault UK website. The car was under 4 years old so no 'contrôle technique' required. Money was very tight for us too and we had initially been put off by lots of scare stories on the internet about the cost of re-registering in France. We are VERY glad we did now - for 250€ - a lot better than trying to sell your car back in the UK or to a dealer here. If I were you I'd keep the current car, reregister it (you've got 6 months officially to do it though I know many who have been driving around on UK plates for years, but insurance gets tricky if you're not back in the UK much). and then buy your second car once you're settled and have built up some spare cash.