Blog
Stephen_Pilkington July 31, 2019, 3:38am #1
Yesterday afternoon we drove to Dinard Airport and said a very sad farewell to our dearest friend Viv who came to visit for the weekend. As is usually the case, it was a weekend of much frivolity, much catching up conversation and of course much consumption of wine ..... we had a lovely time. Thanks for coming Viv. 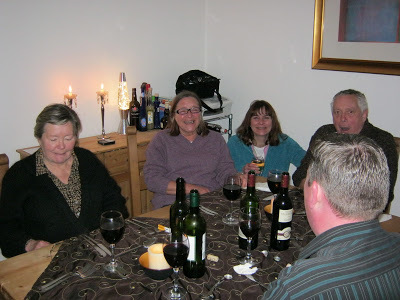 As part of the weekend and in honour of Viv’s visit we thought we would throw a dinner party. It was to be a mix of English and French invitees so immediately the question arises re what to cook. Meat was definately the preferred option as Viv is a great meat eater but should the emphasis be classic French or classic English?
We were sure that either option would be popular with the chosen guests but we do like to shy away from predictability so we decided on cuisine ‘Franglais’. Now we know that this is not a strictly recognised style of cuisine and more something that we have developed over the years marrying what we enjoy about both styles but it seems to work and provides a means of satisfying foodies from both sides of the channel.
We decided on ‘Beouf Bourguignon a l’anglais’, a sumptuous version of the French classic with just a hint of Horseradish in the sauce and topped with an externally crisp but internally light and fluffy dumpling. Combining the dish with a creamy ‘dauphinois’ and carrots it was sure to be a hit – and it was!
It was an evening of much ooing and aahing over the food (most satisfying) and a suitably convivial marking of our best friends visit.
If you want to try this combination yourself and experience the delights of cuisine ‘franglais’ this is what I did ....... 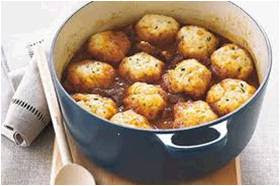 Ingredients: (for 6 people)
(make the bourguignon the day before you are due to serve it as this extra time really allows the rich flavour to develop)
1.25kg Stewing steak / Chuck or similar – cut into really large chunks so that each person will get two or three pieces.
1 large onion roughly chopped
50g Flour
3 cloves garlic crushed
2 bay leaves
1 75cl bottle of good red wine
1 rounded teaspoon of strong horseradish sauce.
300g Smoked Bacon chopped into large chunks
18 baby onions peeled but left whole.
Salt & Pepper
100g Self Rasing Flour
75g Beef Suet
Salt & Pepper
Cold water to bind.
Pre-heat the oven to 130°C / gas mark 2/3
In a large heavy based frying pan heat 2 tablespoons of oil and seal the meat a few pieces at a time until well browned all over and place into a large oven proof casserole dish. This will take some time but is really important for flavour and tenderness of the finished dish.
Leaving the meat juices in the frying pan fry the chopped onions until just browning on the edges and then add to the casserole. Add the crushed garlic and a good few pinches of pepper. Add the flour and mix in thoroughly – it may look a little bit sticky and gooey at this stage but do not worry. Add the bayleaves and enough of the red wine to cover the meat, stir in the horseradish sauce. Put a lid on the casserole and place in the oven for about 1½ hours. After this time fry the smoked bacon chunks and baby onions until browned add them to the casserole and cook for another 1½ hours until the sauce has thickened and the beef is tender. When the casserole has finished its cooking remove the lid and add salt to taste.
Once cooled leave in the fridge until you are ready to serve – it will happily sit there for 2 days so its a good dish for planning ahead.
When you are ready to serve the dish put the casserole back into a preheated oven at 175°C gas mark 5 and allow to reheat for about 40 minutes with its lid on. If the sauce thickens too much during this time just add another few glugs of red wine and all will be well.
During the reheating make the dumplings. In a large bowl mix the flour, suet,salt and pepper together and mix to a firm dough with cold water. Knead very gently until the mixture comes together and then divide the mixture into 6 equal pieces. Roll into balls and set aside. Once the casserole is starting to bubble, remove the lid lightly push the dumplings into the casserole so that they are sitting on top rather than being fully submerged. Put the casserole back in the oven, without its lid and cook for about 30 mins until the dumplings are crisp and golden.
Enjoy – this is a real winner ........
cat September 17, 2016, 7:53pm #2

I am defo going to have to try this one, thanks for the recipe