Do you remember what you sang at school?

There is a children’s choir singing Nymphs and Shepherds on the radio and it reminded me of the songs we used to sing at primary school.
It was always Friday afternoon and we sang songs like The Lincolnshire Poacher, the British Grenadiers and Oh no John etc.
We sang Nymphs and Shepherds at the music festival in the beautiful Winter Gardens in Morecambe.
I was included because I could remember the words, not on the quality of my singing.

Jane… I do burst into Nymphs and Shepherds come away… when the mood takes me… much to the amusement of my family… that, and the other songs you list, bring back happy memories…

My primary school music teacher used to clearly encourage us to warble upwards or downwards…by raising and lowering one hand, while beating time with the other… Nowadays, they wave hands around to no good effect as far as I can see… and if I don’t know the tune, I’m helpless/hopeless.

I don’t remember singing but I have nightmares about having to do country dancing at primary school!

Glorious… we sang that at the older school… absolutely loved it and still do.

Workington Tech College, school song, “By The Banks Of The Silvery Derwent”.

I was in the (all boys) school choir, the choirmaster was a teacher who taught music (of course) and sport. His name was Mr Alcock and thereby hangs a schoolboy tail/tale.

We were somehow roped into the choral Union of Birmingham Symphony Orchestra and I sang as second tenor in the chorus: Walton’s Belshazzar’s Feast, Mendelssohn’s Elijah, works by Ralph Vaughan Williams conducted by the great Englishman and composer himself. Those were the glory days of State education,as I recall them

We also sang sea shanties and traditional songs as others have mentioned. Every morning we had a morning service as part of assembly, and it always included a sung psalm to a plainsong chant. I can still remember them and sing them.

I have a lifelong habit of singing under my breath as I work, or even as I shop. Many people have commented on it, always favourably, and strangers sometimes join in! I’m usually unconscious of doing it until someone remarks.

One day, my boss walked into my office and asked if I was all OK… seems he was so used to me singing gently, under my breath, that when I was silent he thought I might be ill…

We also did a lot of Gilbert and Sullivan at school… well, we tried…

our wild enthusiasm was not always matched by our talent…

I was in a few school plays and loved it. Here is me in a musical called The Dracula Spectacular Show which was enormous fun to do but I imagine was not so much fun to watch. It was a big production and we even took it “on tour” to The Netherlands for a week. I was a Bride of Dracula and I’m dead centre standing in front of Dracula with my hands clawed. I remember one of the songs was called Come Fly Transylvanian Airways

Black and white photos back then, early 1980s. 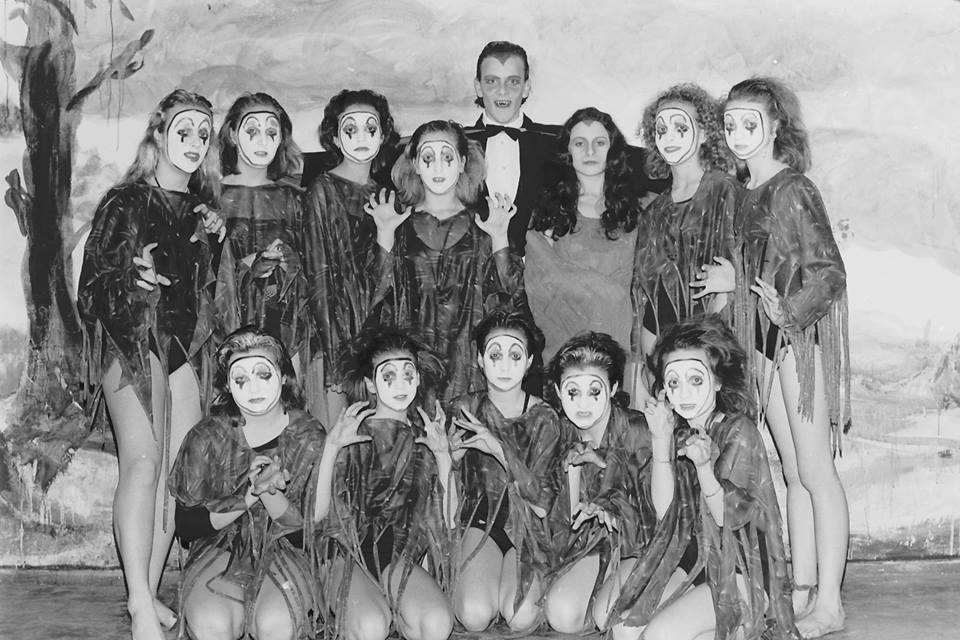 Wow… how about an autograph…

Yes, Mandy it looks a very professional production, and you are still recognisable as you in the photo, maybe the forehead or perhaps the claws (I don’t think so!)

I still remember the hymns that we sang at Primary School but as I worked in schools for all of my working life I’ve been introduced to many more since then. Thanks to working with some very talented colleagues I’ve also been involved in some excellent musical productions. I personally can’t sing a note.

We also had a maypole.

Wow… now you have got the grey cells joggling… Yes, we too had a maypole, but it was not in situ all year round… I cannot remember the details, but I think it was a Summertime sort of activity… dancing/prancing round and in and out… always someone getting a bit tangled… Happy Days !

We used to bounce rubber balls up against the walls, catching them again with ease, after a bit of practise… and chanting some rhyme or other as we did so…

and five stones… and jacks…

and, of course, hopscotch (which we do have here, in the playground at our school… yippee)

I can still remember our school song from Lancaster Girls’ Grammar.
It starts 'In our small world upon the hill, We live, we live together.

I remember the rugby songs​:wink:

The Aussie national anthem of course and Pop the Magic Dragon

Puff the magic dragon (lived by the sea)?

Singing at school was especially unpleasant and made me extremely self conscious for a long time. I remember songs from Sunday school much better, and also from other youthful activities.