Once again and really pleased that the défilé militaire will still be taking place as well as the Concert de Paris this evening at 21:00 although there will be no outside audience by the Eiffel tower.
Hopefully, the fireworks will still take place…
Bonne fété everyone!

No fireworks here in 17.

down below… there’s a link video to watch Paris “live” 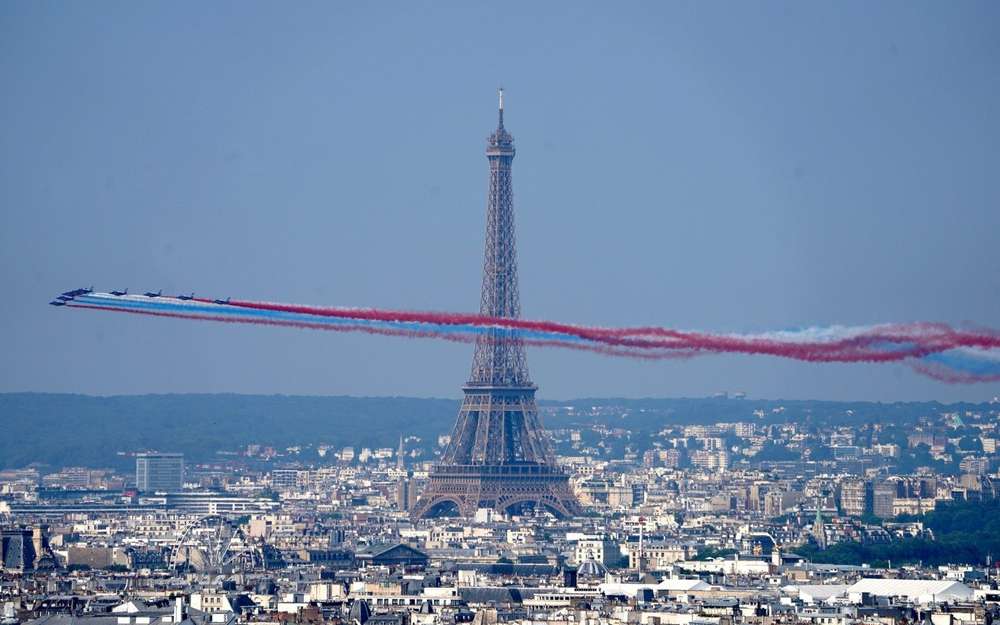 If we are trying to take care of the environment, why do we still continue to have fireworks?
It doesn’t make sense to me. 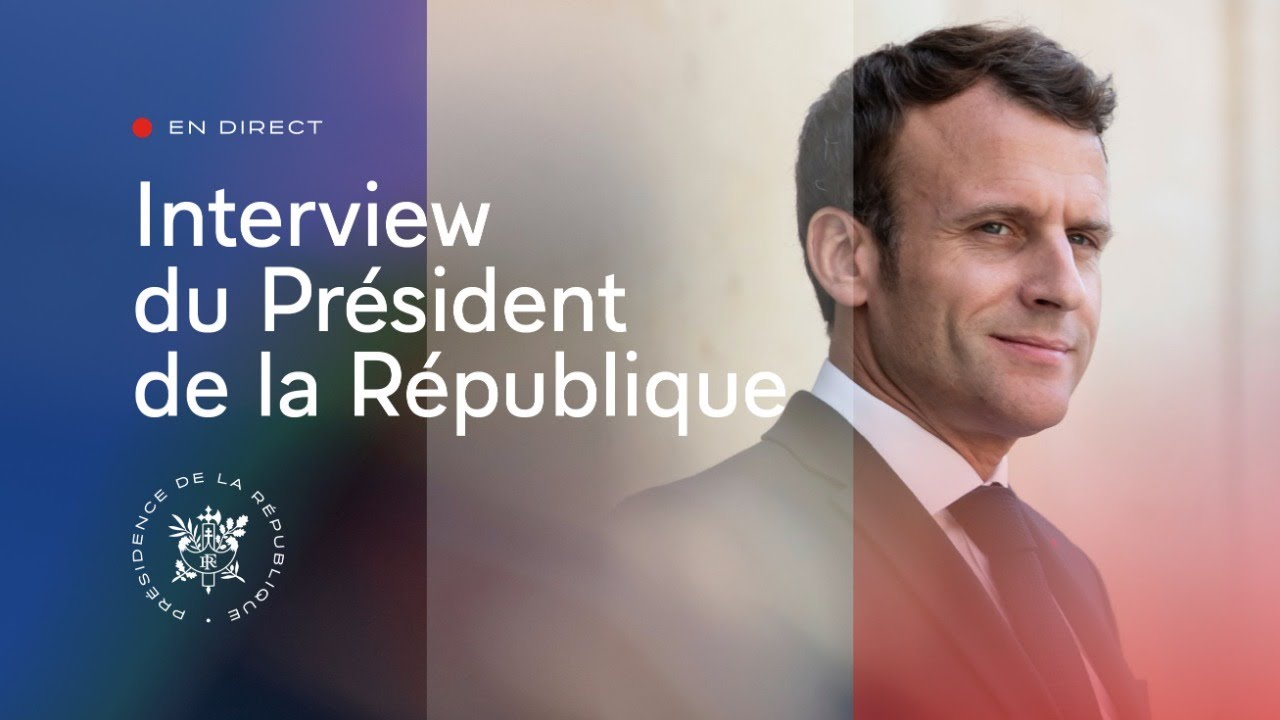 the concert was absolutely great… 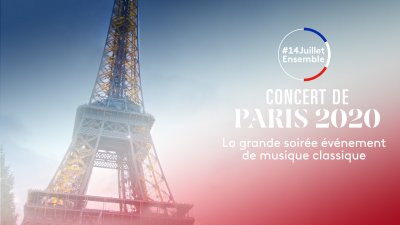 anyone seen them lately ??? 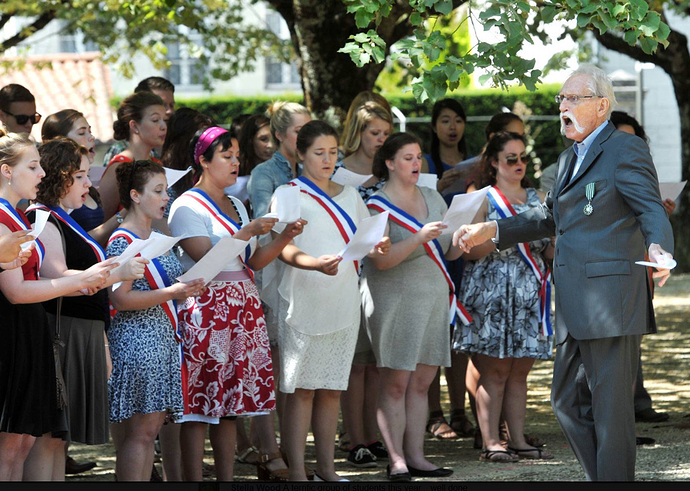 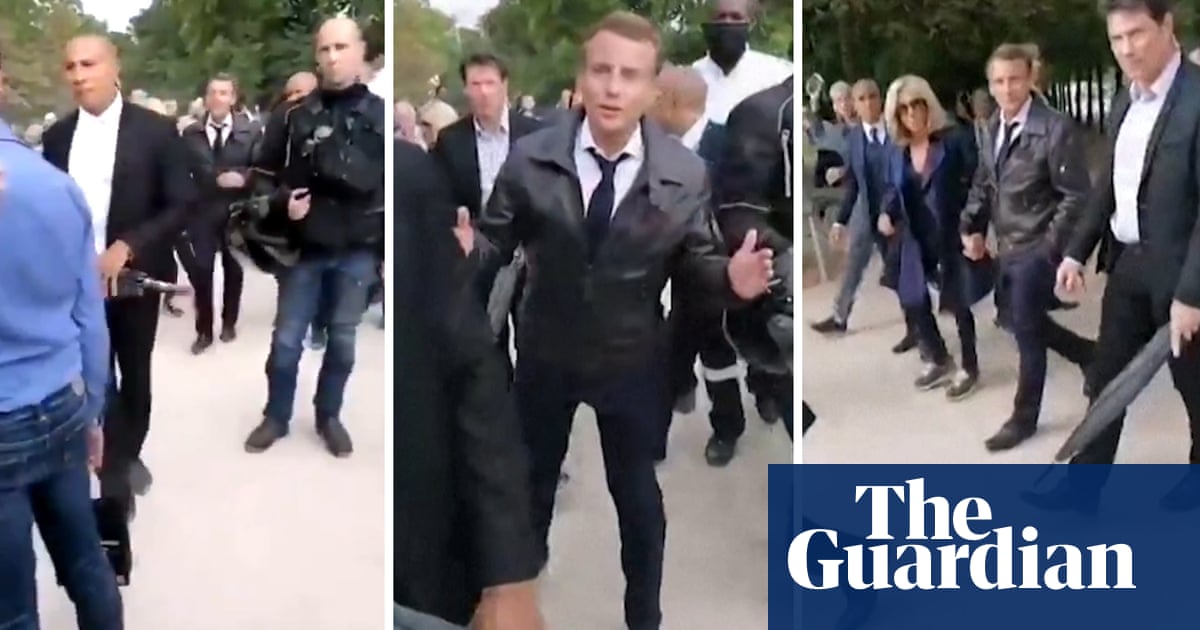 The link posted by @Stella to the 2020 Concert de Paris has expired. However, this is the YouTube link to it 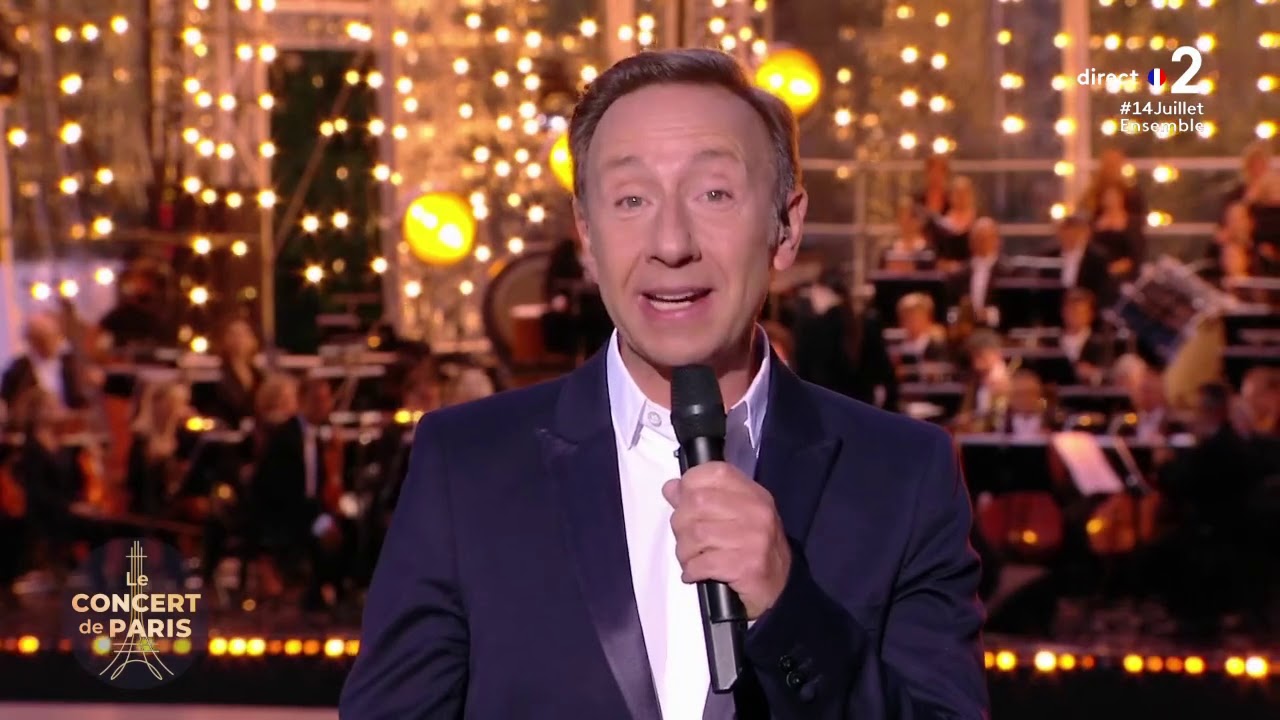 My neighbour eagerly watches the military parades on TV. He says they’re amazing. He says it starts this year at 10.00am.

He’d also go out and celebrate but says this year due to Covid he’s staying home and seeing it just on TV. 82 years old and fully vaccinated

I watch the parade too… an amazing spectacle!
The program on France2 actually starts at 06:30
Hopefully the the Patrouille de France will get the smoke on this year!

It’s making me chuckle this morning… the sound/vision is slightly out of sync. From time to time, the highpitched voice of the female presenter seems to come from the man/men she is interviewing… 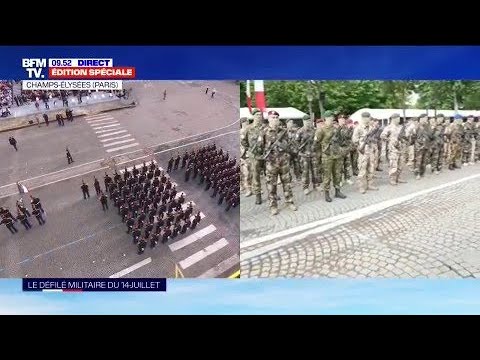 closely followed by the Russians
https://www.youtube.com/watch?v=JioMLSvUiCg

It’s interesting to examine the background of the Fête nationale as it’s too easily considered to celebrate the fall of the Bastille & the beginning of the French Revolution and basta. While of course it’s directly linked to that the reasons behind it are different. Few people in France how this Fête nationale came to existence. Give it a try with your French friends or rellies, ask them about the real reasons, I bet few would be able to enlighten you.

1871: France is a bruised, rudderless mess of a country, in the throes of intense division and instability. The Franco-Prussian War has just finished, ending with the bloody Paris Commune uprising from March to May 1871 (to all intents and purposes, a civil war as well as a class war). Thanks to the support of the southern German states, Otto von Bismarck and the Kingdom of Prussia, then by far the largest and strongest German state, come out the victors. German unification forges ahead and becomes the German Empire. This foundation is symbolically ratified in February 1871 in the Hall of Mirrors at the Palace of Versailles, which further rub salt into French wounds (Treaty of Versailles, which in its terms was very punitive for France, huge indemnity to pay + loss of Alsace & parts of Lorraine. Roughly the reverse will happen at the other Treaty of Versailles in 1919, between Germany and the Allies).

As for France, the 22-year long relative period of stability and prosperity (especially in the 1860s, partly thanks to new free-trade treaties, esp. with Great Britain) experienced during the autocratic regime of the hawkish Napoléon III seems to be over.
The disgraced president-turned-emperor, who spent all of his life in exile apart from those 22 years, has fled France to Kent where he’d soon pass away. A year or so prior to the Franco-Prussian War that would seal his fate, Napoléon III had sussed out that the end was nigh for him, as illustrated for instance by the significant rise of the mainly city-based pro-Republic opposition at the 1869 Législatives election (only men over 21 could vote), which led to demonstrations and episodes of violent rioting between June 1869 and the beginning of the Franco-Prussian War in July 1870. 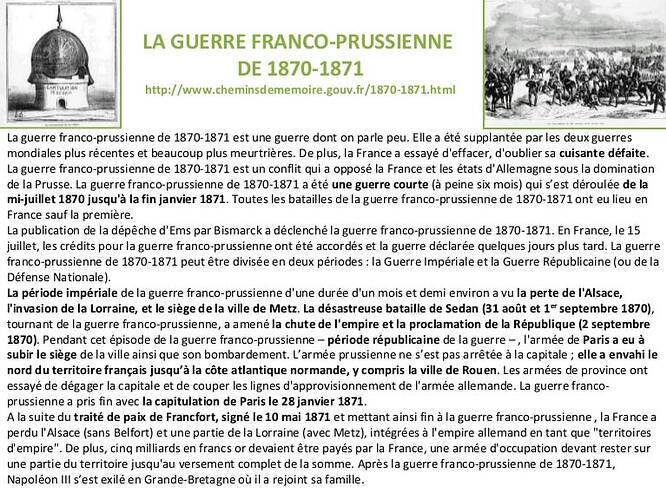 1871, the war is over and Napoléon III’s Second Empire is no longer. At long last for France, it’s the end of a long line of kings, monarchs and emperors. A radically new chapter starts, one that is hoped will bring stability. Since 1789, France has lived through 3 revolutions, countless uprisings and experienced 7 different regimes (3 constitutional monarchies, 2 republics and 2 empires). 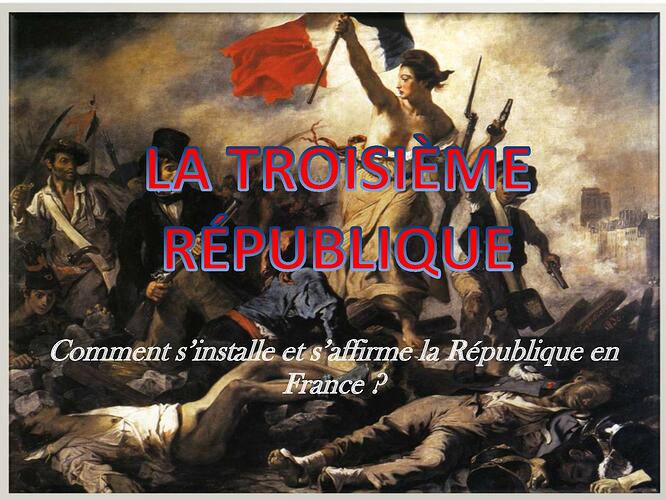 France then embarks on a total restructuring and formative phase on many different fronts.

The Third Republic is established (it will last 70 years, from 1870 to 1940), but the divisions are intense, and the pro-Monarchy parties are active and influential. These pro-Monarchy politicians don’t form a monolithic alliance, they represent various parties and strands (they go under several political names: the Legitimists, Bonapartists, Orleanists, Royalists, the Clerics etc.). New republic or not, they have no intention of fading away gracefully. They know they still enjoy support from a sizeable chunk of the population, especially in les campagnes, the pro-Monarchists and many in rural anti-Parisian France abhor the idea of an atheist, leftwing, Paris-centric republic.

The Législatives of 1871 are a disaster for the leftwing & moderate progressives who fly the flag for the Republic against the pro-Monarchy. The Monarchists win 62% of the National Assembly seats (only men over 21 could vote).

After five years of political disruptions brought about by the Franco-Prussian War, the revolutionary Commune and a strong resistance of the Monarchists, a new constitution is adopted “dans la douleur” in 1875 (in fact a series of constitutional laws) and finally ratified in 1879 after a few amendments.

Throughout the 1870s, the opposition between the Republicans and the anti-Republicans (those of a Monarchist persuasion) is fierce and tension is palpable in the country, Paris for instance is under martial law.

In the mid-1870s, the Republicans are on top but the Monarchists and conservative opposition is still strong, helped by the rude health of religion in France.

The pro-Republic have convincingly won the 1876 Législatives elections but a constitutional crisis forces another election in 1877, and this time the victory for the leftwing Republicans is narrower as the Monarchists grab 40% of the seats. The Monarchists are seen as particularly dangerous as they aren’t progressives at all. They are divided but most of them reject the British type constitutional monarchy, preferring to advocate a new Restoration, of the post-Napoleonic era type, which would set back the country the best part of a century.

On paper, the pro-Republics, for the second time running in 18 months, have won the election but in terms of governance the country is still in a bind.

After decades of autocracy, stasis and turmoil, France is severely lagging behind its German and British neighbours, in terms of democracy, economy, social welfare and financial policies. The creation of new taxes is nowhere near enough for the French state to balance the budget, the taxation system is antiquated and inefficient (it would take another 50 years for income tax to be created, in 1914, nearly 120 yrs after Britain) and the crippling penalties imposed on France by the Versailles Treaty of 1871, as well the major investment plans initiated in the late 1870s, force the state to borrow more and more.

France is much more rural than its main competitors and that hobbles her. That’s compounded by the fact that seats in both the Lower and Upper houses (National Assembly and Senate) are weighted towards conservative rural departments and regions.

That’s mostly why, at the end of the very end of the 1870s, it is decided to come up with a series of largely symbolic measures in order to speed up and firm up the unification of what is still a very divided country (and I won’t go into the many regional, linguistic, religious etc. divisions within France). 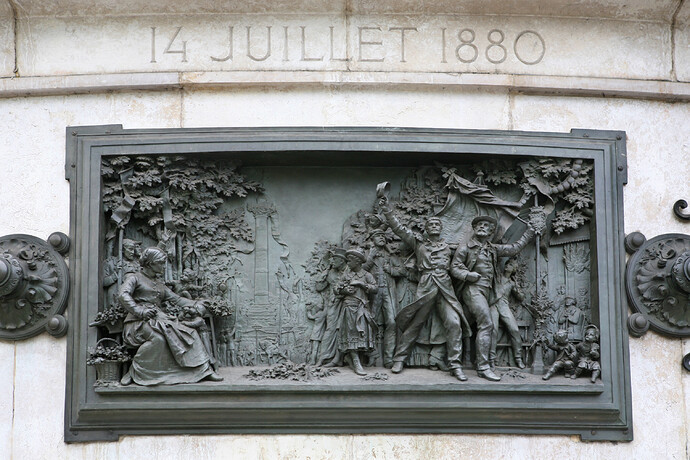 3021×2014 1.97 MB
The haut-relief in bronze celebrating the establishment of the Fête nationale on the 25 metre high Monument à la République, Place de la République in Paris, just north of the Marais neighbourhood. It is one of the 12 hauts-reliefs placed around the large pedestal representing key dates of the republic. See this.

In 1879, this drive for a unified France and the decision to adopt both an anthem and a national day are also a cynical and opportunistic move by those in charge, namely the newly-elected President Jules Grévy (largely a honorific title then and even more so from 1879), the Parliament (National Assembly & Senate) and the Conseil (government). They reason that by feeding nationalistic fare to the people, it would deflect the attention away from real problems and there’d be less pressure for them to implement much-needed social and work legislation reforms (as I wrote in my previous post, France was lagging behind its main neighbours on that front).

Unifying the divided country around this new, fragile republic and trying to coalesce the peuple around a republican ideology become the priority.

1879 is a turning point, the critical point at which this new governmental structure and these new Third Republic institutions (not technically new, there’d been a parliament for decades etc. but the legitimacy and strength of the institutions is novel, it is now a bona-fide parliamentary republic) become more firmly established and are started to be envisaged as viable by the general public, relatively speaking (and 70 years of the Third Republic would prove people right). From that point on, using the long lost ideals and legacy of the French Revolution to buttress that momentum and their policies, the republican politicians in charge set about radically transforming the country.

And it’s in this peculiar context of mutation and dire need for unification that the Fête Nationale du 14 juillet and the Marseillaise come to the rescue.

In February 1879, the Marseillaise, which had been banned in public places during Napoléon III’s Second Empire, is definitely adopted and becomes the national anthem.

Fifteen months later, on the initiative of Léon Gambetta (then president of the National Assembly) and the fiercely leftwing republican and philantropic MP Benjamin Raspail (a major Parisian boulevard & a métro station are named after his father), the 14 juillet is voted in by parliament as the official national day, in commemoration of the fall of the Bastille and the Fête of the Federation.

To emphasise the decision, town halls across France are given busts of Marianne, which had been a unifying and republican symbol since 1792. 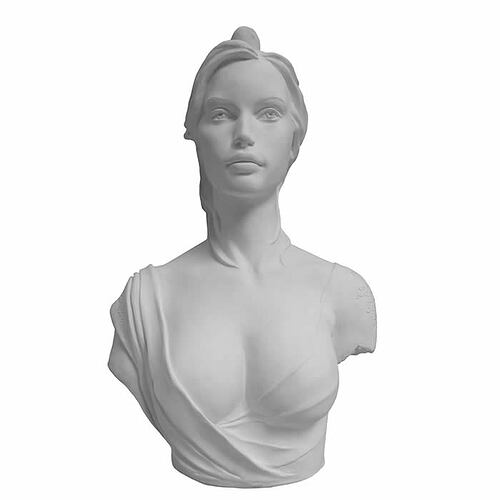 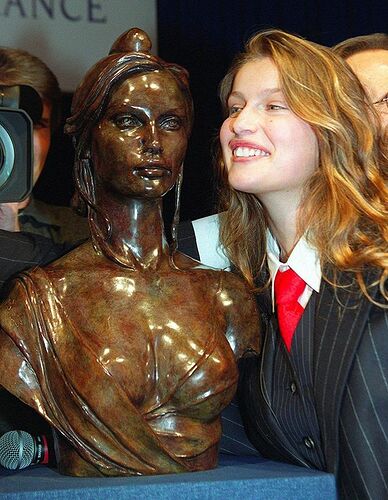 Undoubtedly a victory for the Republicans as it helps establish unity and therefore fosters more acceptance towards the republic (the transitional and turbulent 1870s made way for the 1880s during which the republican concept was widely accepted by the population).

Buoyed by this resounding success, on the back of this new-found unity, a raft of laws and measures further cementing the country are taken from the early 1880s onwards (not least the Jules Ferry laws on secular universal education for “schools without God”; also anti-clerical policies as religion, very present in school etc., is deemed to be holding back the country and French unity – which will lead to the 1905 law on the separation of the Church(es) and State; + yet another big push, started by Abbé Grégoire a century earlier, to have French established nationally so against regional languages which was also felt as a barrier agst unification etc.).

The concert and fireworks were just great…

personally, I thought the concert was rubbish… not keen on the conductor waving her arms about and dancing to the music on the rostrum

Stuck with it to just about 22:30 then went to bed disappointed so didn’t see the fireworks.
Not to the usual high standard… Even got irritated by Stéphane Bern’s in between dialogues…

Ah… I listened to it while I pottered about. But I stopped to watch the fireworks.