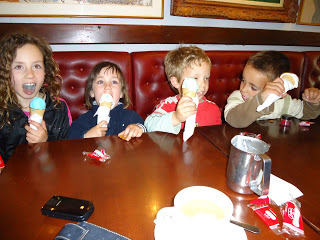 Collioure may be the jewel in the crown of this lovely region but it sure isn't going to get any stars for service .. it's almost as if they know that they are going to get the custom anyway and they can't be bothered to make any effort. The customer, rather than always being right, is, franchement, a pain in the ass.
Two Irish friends of mine stayed there last week and were appalled by the lack of service and the sheer rudeness of everyone they came in contact with there. Only for the fact that they were completely zenned out, on a minibreak away from their families, it could have spoiled their holiday.
We popped down there one day to see them and went for an icecream with the kids, as you do. Little 3 year old Zoé ordered a vanilla cornet but after tasting it realised she had been given a nougat flavour. Well, she did more than taste it, she stuck her snotty nose into it really and declared it wasn't what she wanted. Fair enough, the sales assistant said she would change it to vanilla. Mr Getrealfrance, never one to miss a feeding opportunity said he would take the mistaken cone instead.
It would be on the house of course? he winked.
Oh no, if you want the nougat cone, you must pay for it as well.
Ah, non merci, says Mr Getrealfrance
Right so , says our saleslady, and with a huff and a puff and an oh la la la, she lobbed Zoé's snotty icecream back into the container for serving to the next unsuspecting customer....
And Bonne Journée to you too madame!

Can i just say: Some of the artisanal the ice cream in Collioure is bloody fantastic. It is a tourist trap, but I've been there a number of times without anyone ever being rude to me. You can have bad experiences anywhere.

And it is now on the SF facebook page - which last week reached 63,500 people!

Perhaps you should tell this story to the Tourist Office, they may not be so offhand when they realise you have posted this to 4,000 English speakers and their families!