Good grief.... I agree with Gavin Williamson and the Telegraph

There has indeed been a lot of debate around this lack of clarity in the UK since the beginning of the national lockdown (3 months ago), especially around this “local”. I don’t think it’s even been defined clearly by the powers that be.

I suppose you had it tough in France in your lockdowns (much tougher than here for the first one anyhow, last spring) but at least it was (more) clearly defined in terms of distances, although of course there are bound to be grey areas.

I can think of at least 5 decent-sized ones in Amble, Ashington or Alnwick, so much closer to him (1 big Asda, 2 Morrisons, 1 Sainburys), that’s why the police, to justify the fine, told him that he could have used much closer ones.

True - and this is pure speculation - but…

We shop in Tesco, because there is one about a mile and a half away but the result is that we’re not terribly keen on the other big chains. Stock items differ, own brands more so and shopping takes longer and always seems to wind up more expensive - if he regularly did his shop in that Tesco, he might not have given another supermarket a moment’s thought (at least, before being fined). Now, I don’t know that, nor do I even know that it was the Kingston Tesco - I think there’s another large Tesco on the North side of Newcastle.

However the two girls who got find £200 for going “out of their local area” for a walk had driven further IIRC and they got their fine overturned.

And don’t even start on Dominic Cummings…

[quote=“Eddie, post:159, topic:34342, full:true”]
The figures sound wrong to me I have found information stating fines£ 200 on first offence doubling up on each further offence to £6400 Therefore I would have thought at the most this would be a fine of £600[/quote]

Maybe, I don’t know for sure, I’m only going by what my colleague’s wife told me. He was wrong to go there anyway IMO, not necessarily morally wrong but legally wrong, whatever the fine it was hefty for something he could easily have avoided.

It’s all set out here (but there might be omissions for particular cases):

The current health protection regulations have been put in place to help reduce the rate of transmission of COVID-19. We have a shared responsibility to adhere to the regulations in order to keep ourselves and others safe.

(Sorry for the repeat post, this one, #164. Trouble is, I haven’t managed to delete it)

You will be surrounded by spectacular history then Frédéric. We lived in Northumberland before we moved to France - my wife was born in South Tyneside but lived most of her life in Nothumberland - we lived together in Alnmouth (‘the prettiest village in England’) then right up in the hills between Glanton and Eglingham - just as lovely as our current home in Brittany, but much, much colder!

Shouldn’t that be “one of the prettiest”? It’s pretty, lovely location etc. but I’m not even sure it’s the prettiest in Northumberland, never mind England but these things are very subjective of course. I love the Red Lion pub there, they’re great with dogs (we are big dog lovers) and the food is good. The beer garden is particularly nice, great views from the elevated platform at the back.

Northumberland’s stock has hugely risen in the last 20 years, Harry Potter put Alnwick on the map in 2001, Alnwick was voted “Best place to live in Britain” by Country Life mag readers in 2002 (Hexham also got the same accolade (or thereabouts) recently. Then the excellent Alnwick Gardens opened, the Coast was given the AONB accreditation etc. and it just went woosh from then on. It’s attracted more money, more investment, more facilities, more coastal cafes, sites, far more holiday rentals etc. (it wasn’t fine when I arrived in the county just over 20 years ago but nowhere near as developed. Amble felt like a bit of a dump TBH 20 years ago, it’s really spruced up since then, lovely marina, seaside pods, decent good-value restaurants etc.) and tourism took off big time. it’ll be interesting to see the increase in pop. in the new census, I’d surmise that it’s gone up 10% since 2011 (lots of new builds, everywhere).

The county has consequently somehow became a bit posh, explains why out of 4 constituencies, 3 are now Tory, as opposed to only 1 in 2015, Hexham’s, which has been a safe Con seat for over a century (Christ, as a result of the fall of the so-called “Red Wall”, even the deprived Blyth Valley is now Tory. And Ian Lavery managed to hold on to his Labour seat by a whisker whereas it was a hitherto very safe Labour seat).

Our house was next to the Red Lion garden. I’ve had some fabulous evenings there - including my 50th birthday party with a band on the deck at the back - friends from all over camping in our and most of the neighbours’ gardens. The village was absolutely wild in those days. I remember one visitor commenting one Sunday morning on how lovely and quiet it was - but one of the neighbours I was with let the cat out of the bag: “Only because all the locals were drinking in the Lion until 3 this morning, and most of them are still in bed!” The Lion and the Sun used to compete for the local trade principally on the basis of which would stay open longer. We still had a village bobby - still in the ‘police house’ by the roundabout on the coast road - who was often there - and indeed at parties where even less legal substances were openly consumed.

When I first moved there I was an economic development officer for the local authority - I could tell some stories about the shenanigans in the Labour group, believe me. I remember Ian Lavery well - before he was an MP. I am a socialist, but many times I found myself looking round the Labour group (many of whom were definitely not socialists) and thinking: these are just the sort of people that, had they actually won absolute power in 1917 like the Bolsheviks, would have drifted into Stalinism!

‘The prettiest village in England’ by the way was a quote from a travelogue a friend sent me when he heard I was moving there.
But what do others think? 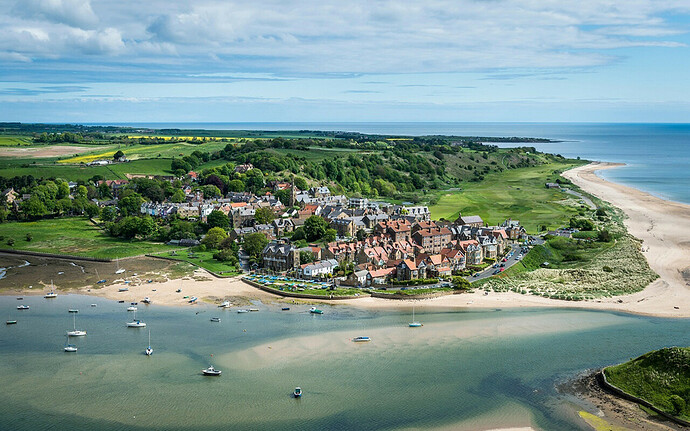 Yes, I know about Ian Lavery, dodgy as hell, in a Teflonesque way to boot, he’s been involved in at least two local well-publicised scandals in the last three years alone but got off scot-free (my FiL actually taught him, at Ashington High I think it was. Won’t repeat here what he’s got to say about him!).

When you lived in North Northumberland, did you go walking at all into the National Park, the Ingram Valley, Breamish Valley, the Cheviot Hills etc.? Northumberland is such a great place for walking, it’s not too high, not too flat, not too crowded, even at weekends (compared to say, the Lakes of the Peak District, which in places now suffer from serious overtourism IMO).

Yesterday I walked in the Simonside Forest and the boggy but delightful Simonside Ridge above it, about 8 miles in total. From the top of Simonside Hills you have a 360-degree view encompassing Scotland, the Cheviot Hills, the North Sea coastline and the Lake District, which you can just about make out – on a very clear day, which wasn’t the case yesterday! (it was lovely but a little hazy). You could just about see the Boulmer “golf ball”, the (newly-restored!) RAF remote radar structure on the moors that looks like a giant golf ball, near the coast village of Boulmer.

(Below are a few photos of the walk, sorry it was a bit hazy and I had my old-ish Samsung smartphone with me - I’ve got two at the mo -, OK but not as good as my other one). 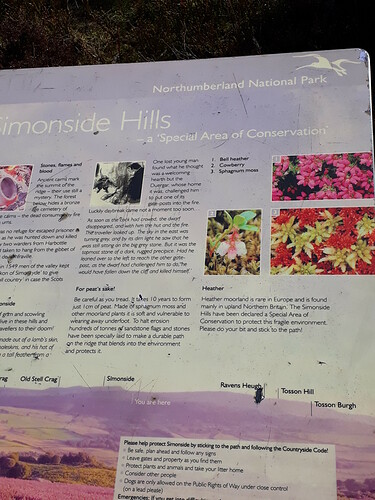 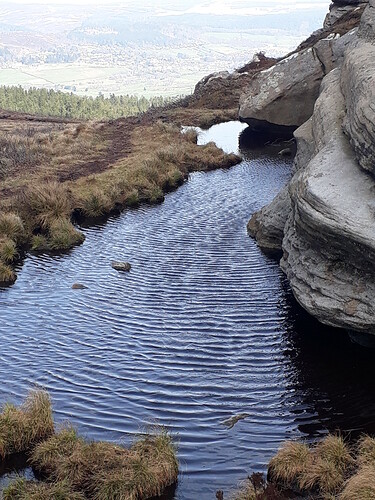 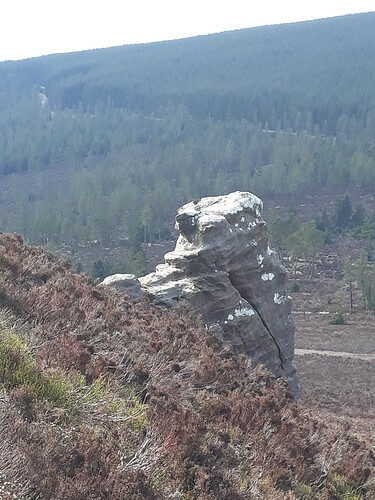 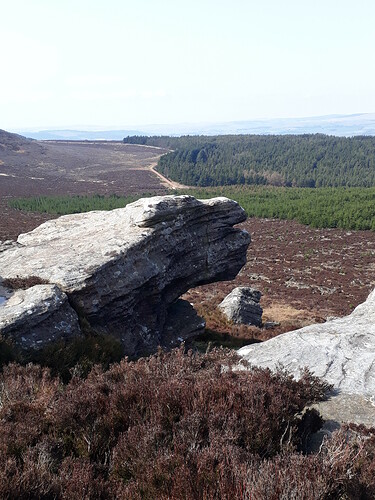 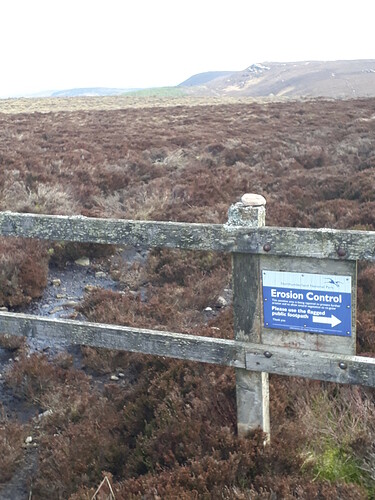 Nice pics of nice part of Engand.
We went up there occasionally when we lived just north of York until we finally arrived in Brittanty…22 …a couple of years ago.
Miss kippers from Craster, always available in Waitrose and York Market.

When you lived in North Northumberland, did you go walking at all into the National Park?,

Yes - I was actually in a walking group that went out most weekends - but it gradually wound down as the kids arrived (we had 4!).
Have you discovered the ‘message’ option by clicking on people’s names here Frédéric? - I’m conscious that conversation about Northumberland might not be of interest to many SurviveFrancers, so might be better to continue via private messages?

Once you get up into the heather and bracken covered hills, Brittany is not so different from Northumberland or the North York Moors. Just warmer!

Brittany is not so different from Northumberland or the North York Moors. Just warmer!

When you lived in North Northumberland, did you go walking at all into the National Park?,

That’s a great shame, as talking about Northumberland is damn sight more interesting in my books than talking about Gavin “there is no point listening to French politicians” Williamson…

OK, I’ll shut up with my Northumberland then

Don’t get me wrong Frédéric - I found your posts really interesting - brought back great memories - but I think the majority of contributors here are from further south in the UK, so their mental picture of England has Newcastle (flat caps and whippets) then Scotland (kilts and deep fried mars bars).
You know some here even think people from Manchester or Yorkshire are ‘northerners’!

I was joshing of course but you’re right insofar as this thread is concerned, it’s supposed to be about GW and the Telegraph, I don’t want to derail it any further.

You know some here even think people from Manchester or Yorkshire are ‘northerners’!

Northumberland is down south

so their mental picture of England has Newcastle (flat caps and whippets) then Scotland (kilts and deep fried mars bars).

Nothing wrong with a deep fried Mars bar, deep fried Turkish delight were better though