Today’s question to the panel is

I, potentially, have a source of used cooking oil, nearby.
If, indeed, the answer is in the affirmative, it would be too good an opportunity to pass up.

came up with all sorts of answers… mostly talking about “kits”

Interesting idea though… let’s see what everyone else turns up.

I did know someone in the UK who ran an old VW on chip oil. He allowed it to stand and decanted it for use, to avoid getting solid particles in the system. I have also heard that some people used new cooking oil, that was cheaper than diesel because it didn’t attract fuel duty.
It certainly works in older less sophisticated engines, but I can’t comment on the legality or the long term effect on the motor.

I think you will find it is illegal to run such a vehicle on French roads… (although is is legal in some other countries).

here’s an interesting site… which talks about this… 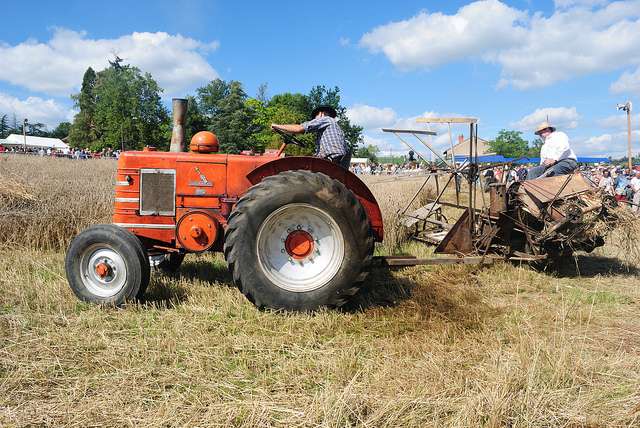 I have also heard that some people used new cooking oil, that was cheaper than diesel because it didn’t attract fuel duty.
It certainly works in older less sophisticated engines, but I can’t comment on the legality or the long term effect on the motor.

Tesco want £5 for 5l of sunflower oil at present - it will soon be cheaper to fry your chips in diesel!

I seem to recall many years ago, a group that went by the name of “Roule ma fleur”.
I’ve Googled to try to re-find them; & they appear now to be grouped together with a bunch of other organisations…no mention of running on v.o. being illegal, though.

and it goes on to say how crazy that is, considering everyone is supposedly looking to “save the planet” (that sort of thing…)

Perhaps there is some 2020 news on this subject.

Apparently, it’s legal if it’s mixed with diesel, but that may have changed since the article I read, was published.
Also, if stopped by the VAT men, their nose(s) are / were not deemed to be sufficiently “homologués” to determine if the vehicle is running solely on vo.

have you got the link where it says “legal”… 'cos that’s not a mistake anyone would want to make…???

I think this is it Stella

that’s an interesting link, Bob… it talks about making a declaration to the customs…

However, I feel there must be some sort of “authorisation” necessary, or folk would simply be dumping their waste cooking oil into the car’s reservoir…

I should clarify Stella that my original plan was to filter it & use it in my very old & basic tractor…the idea of using it in the van was really an afterthought ; but any info on using it would be useful.

You won’t be the only person thinking about this, I reckon

Could be a big saving with a thirsty vehicle.
But the rich odour of frites may be a giveaway!
Might have following drivers salivating, and attract the attention of gendarmes. . . . .

It appears that it gives fewer miles / km per litre ; but if it’s cheap or free then there’s little to complain about

An interesting thread.
A few years ago I purchased some equipment from a UK company (Green Fuels ltd) which enabled me to refine the local restaurants’ used cooking oil to a useable diesel substitute.
The basic oil, if just filtered, will very quickly block fuel lines & filters due to the content of animal fats, water & other strange additives. This will happen very quickly in winter.
Cooking oil contains a thickener, glycerine, which needs to be removed too, otherwise the oil will be too gloopy to flow properly unless it is quite warm.
The process is quite simple though & the cost of the methanol, electricity & other bits meant a per litre cost of 15 centimes 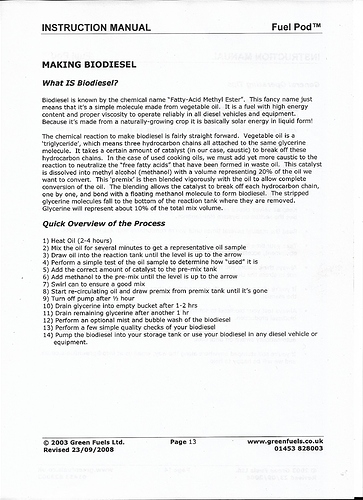 biodiesel1700×2338 701 KB
.
I ran my Volvo V70 with it & also my military Reo M35 multifuel with it.
I was stopped once by the Gendarmes for a document check & although there was a hint of cooking in the air (my engine was still running) there was no issue with my fuel.
I am not sure of the french tax stance on personal biofuel but I can imagine the uproar if a newpaper headline read “Man punished for being environmentally friendly!”
I met other french motorists doing the same but none mentioned anything about it being illegal.
1 Like
Stella July 27, 2020, 6:10am #18

I don’t know about a 2002 iveco, but as I recall, veg oil or bio diesel in a modern HDI/ common rail diesel engine will quickly destroy the fuel pump which is generally a very expensive component.

ISTR Top Gear doing bio diesel in a 24 hour endurance race - it ate through all the seals which they had to replace.