Just to give a bit of context

So cool to be in France, sitting in winter 2019 in the french horn section of a local town orchestra, playing with sixty or so musicians, and I’m one of three who speak English. Wonderful feeling to be playing and contributing when in fact I can’t speak French but can participate at a level of ability beyond my language skill. If that makes sense.

I’ve missed this on so many levels. Now it’s over a year since the last time I was able to rehearse and perform with the local fanfare.

Recently I was sent some music for the french horn part, and discovered that the band director made some interesting decisions in choice of music. He’s decided that the band members will be very rusty, and so the music is much more basic. I guess I was hoping to jump back in with both feet, but he’s going to just have everyone stick their toes in the water. I guess, like so many things, the re-entry into something like normalcy is going to look different as it slowly starts to revv up. I’m just feeling impatient. Thanks for reading, if you’ve gotten this far!

Yes Mary, I have fond memories of attending music events at Angoulême Hôtel de Ville in the quadrangle - the last one we attended I recall was Puccini and was absolutely fabulous!! At the time, we were guardiens for a large holiday let and we took that weeks “interns” with us who just couldn’t believe it - and it was free entry. The quadrangle was packed to the gunnels and the atmosphere electrifying. Being so close to the performers made our hair stand on end.

Is he stil touring

Dummkopf!! The concert not the composer in person

How wonderful. Playing music with others, of whatever genre, is just the best. I play jazz drums but a bit of guitar as well. The first time I stood in front of an audience and got the nod to go into a blues solo was petrifying but ecstatic.

As for a wind band like yours, my god daughter, brought up in by a jazz fusion composer, arranger, multi-instrumentalist father, used her mother’s original school oboe, a very basic instrument. A ‘proper’ orchestral oboe was beyond their means.

After a rather frustrating concert with this oboe she came up with a quip worthy of Dorothy Parker. “Dad, I need an oboe where you can’t see the wood for the keys”

Sadly, god dad couldn’t afford the £3000 required for a quality oboe but her teacher was tipped off that Yamaha was going to offer a 1/2 price sale. Her god mum had £1500 of mattress money she couldn’t think what to do with so it was turned into an oboe - and indeed, you could not see the wood for the keys.

I’d like to add my story of how I got my french horn. I bought it in 2009. It cost me about the same amount as the oboe! I purchased it used, after trying out about 8 different french horns in the store: Sam Ash Music in New York City. I’d travelled from Downeast Maine (state of Maine, about an 800 mile trip) by train and bus to look at the selection there. It took all of my savings at the time to pay for a good horn. I ended up, just by trying them out, selecting one that I later learned was made in 1952, and had a ‘cult’ following of sorts. It was designed by a former first chair of the Saint Louis Symphony in the 1930s, nicknamed “Stagliano” after him.

I was playing in a pan steel band up in Maine, and one wintery night during rehearsal my friend arrived at the rehearsal venue with the horn which he’d taken delivery of for me. In the midst of all of the oil drum-based musical instruments, I couldn’t resist unwrapping it there and then. I was so excited (and appreciative of my friend bringing it straight over). One of my lovelier life memories…

Getting it to France was kind of a challenge as I had to trudge through Paris metro stations, trying to get to the next train, with it, plus a couple of large suitcases in tow. The escalators and elevators were not working so I was stumbling and bumbling with the french horn and all of the luggage, for what seemed miles, up and down stairs and around about. What a mess. All arrived intact at my final destination in France, with a few additional odd adventures to boot. 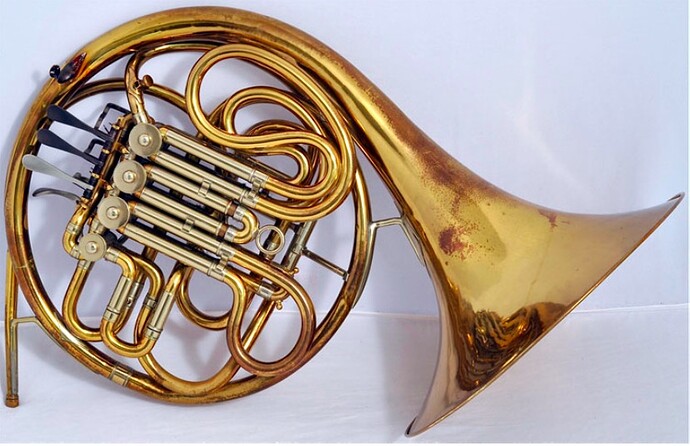 Really nice memories. Except for the Paris metro. Cheers.