At 10 this morning as Christine was leaving through the front gate Jules suddenly rushed past her, nearly knocking her over and disappeared around the other side of 2 neighbours’ houses in pursuit of a cat. Despite calling and whistling him (this has happened once or twice before but only for a few minutes) that was the last I saw of him till 3.30 this afternoon.

Just as I had finished writing a Facebook appeal and texting a couple of friends, the phone rang and an elderly French gentleman and his wife said he was with them, 1.6 kms away

I raced down there in the car to find a highly coloured umbrella signalling to me over the gate. Jules was soon in the car and I only had time for a quick thank you as I was blocking the lane and a car was waiting to pass. But I will be back again tomorrow to get details and make a suitable thank you with a small gift.

What do you reckon? Never give wine to a French person I have always been told, they know more about it than you do, and in any case thay might not drink, though I do remember an elderly French lady giving us a nice bottle for a similar service some years ago.

Jules was soaking wet, it has been raining and he jumped straight into the car without encouragement but the first thing he did when he got in the house was rush to Opie and touch noses.
Bless

Thank goodness, and also for a dog that allows other people to approach it.

I share your reluctance to give alcohol, unless you know the people it’s potentially a fraught gift. But equally so are chocolates if you are diabetic! However chocolates are the lessor of two evils to me.since it’s Christmas you should find some pretty boxes in the shops, or perhaps marrons glaces. If they are of a certain age they might like them better.

I am so glad Jules is home again after nothing untoward for his adventure.

When my pups were young they managed to escape the fenced garden and were gone for 4 hours. I had descebded into the ugly cry, seated on a chair outside the door when they gallumohed back, tails waving, a pheasant between the jaws of one and a poor little quail in the other mouth. It’s hard to say id I was pleased or relieved. My rural neighbours could only see it as a good thing the dogs knew their way home

For a not too extravagant gift, maybe a nicely boxed panettone? Guving something Italian may avoid the coals to Newcastle pitfall, and large looks good

You spoil us ambassador! 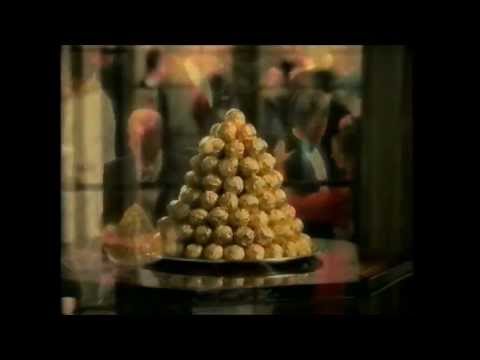 Still makes us laugh every time someone brings out a box!

Thank you both, Ferrero Rocher it is then, and there is a personal connection too, I used to load quite often out of their 2 factories near Rouen. Funny thing is they each had entirely opposite rules of conduct on the premises. One insisted that I get in the back and assist with loading, the other that I was nowhere near.

Only problem is, if I buy that, I will be forced to buy another one, for me.

i’d always give wine - a decent bottle of a local appellation, because even if the person doesn’t drink (though I’ve yet to meet a French person who doesn’t) they’ll still know the names of the best known local wines and will in due course pass your gift onto someone else.

Whereas chocolate is far more difficult, many times we’ve been given rubbish chocolates by people, and we also know many who will only eat milk chocolate. OH is a dark chocolate fiend, but much of what she buys I get sniffy about, for instance we disagree on Cote d’or, which I think is rubbish choc, better than UK stuff, but only just. So, I think chocolate’s best avoided. Despite our differences chez nous, I’m sorry but if we got given FR, we’d look at each other and ask who can we pass this on to? If you’re going to give chocolate go for a little something from Leonidas. Even if they’re not choc snobs they’ll appreciate the gesture.

I know quite a few. People with health conditions, ex-alcoholics, and people who just don’t like it! We used to give people bottles, and still do with people we know. But not strangers.

Hmm, food for thought, from both of you, I’ll have to make my mind up tomorrow. Apart from being grateful for taking the trouble to find our number and keep him safe, which deserve thanks, I would like the chance to chat a little to find out just how he turned up and how they decided he was a stray and needed his disc reading.

@David_Spardo
Truly… a small chocolate treat will be just fine.
At this time of year (Christmas/New Year), chocolate in its many forms is given (left right and centre).
It’s the one thing which is always acceptable (at any time of year).

The fact that you go back to say “thankyou” will be appreciated and the chocolates will be “the icing on the cake”.

The fact that you go back to say “thankyou” will be appreciated and the chocolates will be “the icing on the cake”.

I second this heartily. It’s the thought that counts, and whatever you bring will be most gratefully received.

I’m sure they will be happy to answer all your questions, especially as they are the sort of people who cared enough to call you after finding Jules.

And, you will be a ‘goodwill ambassador’ about whom they can tell friends and pass positive words about ‘les rosbifs’ in France

Bought the ‘Prestige’ selection this morning and went round there but I think they were out. Just got back from a 2nd visit and the old man was very appreciative of the gesture but said that it was nothing to be thanked for because it was normal behaviour to help like this. He refused to accept the gift and said maybe I have some grandchildren who would appreciate it.

I did ask how he came to meet Jules and he said that Jules came into the their garden so they closed the gates to stop him wandering away and then approached him to read his tag.

Warm feelings all round. Glad I didn’t buy two selections this morning though, don’t want to make myself sick.

People with health conditions, ex-alcoholics, and people who just don’t like it!

Along with our muslim neighbours. They do however always have a bottle of whiskey in the house for drinking visitors, and have bought us a bottle of wine before, and a good one at that.

chocolate really does make an ideal gift… and now you can benefit.

I visit elderly folk, often ones living alone… who enjoy offering chocolates to a guest (me for example).
Very often that box will be the ones given by the Mairie in the annual Christmas Parcel… thus the elderly are able to be generous at no cost to themselves … and we both wear broad smiles as we nibble on the delicious offerings.

Except if you are prediabetic like me. Was gutted I got chocolates innmy secret Santa at school! Luckily dark so I’ll end up eating one or 3!

If someone knows you have a health problem… then of course they buy something suitable for you.

But, in my experience… Chocolates are always useful in the cupboard… to offer the unexpected guest.

Got back yesterday from a Happy Birthday visit to a 91 year old… who took great pleasure in pressing me to eat some chocolates. No, she doesn’t eat them … but likes to have them for her guests… and she sent me home with some for OH too.
(it was all I could do to stop her topping-up my coffee with eau de vie… and this is a lady who doesn’t drink… but likes to be generous…)

We shall meet again tomorrow, for the funeral of a mutual friend…
If I accompany her home, I might well accept her offer of coffee/eau de vie… it’s going to be a very sad day… the deceased was a lovely person and “only” 67.