OMG…Just read a round Robin email from La Poste about the new arrangements for ANYTHING coming in from outside the EU.
Yet another Brexit whammy …seems like any items with a “value” including registered letters (value is the cost of sending) need to be tracked, and attract TVA, customer clearance and La Poste handling charges!
At a minimum (by paying on line thro your La Poste account) it is likely to be €9 per item, but if not done online then there is a minimumm La Poste charge of €8 plus the rest!
Big issue is going to be at the senders end setting a tracking process up for each person by the sender. Lots of small suppliers won’t bother, similar for subscription items.
Presents and items from UK will become prohibitive as previously items under €35 fell below a value threshold.
Living here is being severely tarnished, roaming charges, Marie letters for visitors, ongoing Covid travel reductions, recent D/L stress…future of BF routes, import duties on everything, continuing UK-EU squabbles don’t bode good for renewal/lessening of current issues, and indeed might lead to worsening.
The UK is truly sailing away from Europe and all the pleasures of being in France yet not severing with previous life are fast disappearing.
…feeling dispirited with it all and wonder if its what we want for the future

ANYTHING coming in from outside the EU.

Remember though that’s anything coming from outside the EU where customs hasn’t already been paid. The reality in many cases may turn out to be (assuming we’re talking about purchasing something) that during the checkout the extra will be added to the bill and you’ll pay it there and then meaning your item will be delivered to you with nothing more to pay, be it to the douanes or to the deliverer in handling fees. So really it’s a situation, at least for this bit, where you have drunk half the beer and whether it’s half empty or half full is up to your interpretation!

We’re severing all our financial, property, cultural, etc links with the UK John.
We still have relatives there (and in other countries) - including our eldest daughter in Wales - but they all know sending stuff is best avoided now.

We’re severing all our financial, property, cultural, etc links with the UK John.

Think that must be very sad for you and I have no intention of doing that…after all it’s my heritage and where I have spent most of my life. If you seem to despise UK or England so much and its values, do you have any twinge of concience in taking a pension.

We had hoped to have the best of both worlds…the pleasure and enjoyment and trying integrate here, whilst not turning our backs on our heritage, that’s what many Europeans do, Germans in France, Belgium in Holland, Danes in Sweden. Etc, etc…but unfortunately that is now denied as UK sales off…its difficult to decide which boat to join as now you can’t be in both (as others can) as previously and what drew us here originally.

Back to postage and tariffs, its just a another example of Europe working as one and unifying and which drove Brexit

Think that must be very sad

Why? We love France, and feel life here is better than the UK in almost every way, so there’s nothing sad about it at all.
Nor do I despise the UK by the way - we’re severing our formal links simply for practical reasons - to simplify things and insulate ourselves from the vagaries of the deteriorating legal/financial relations between the UK and the EU.
You are dispirited by these changes, surely, precisely because you want to continue to have a foot in both camps, and as they diverge this becomes more and more difficult.

simplify things and insulate ourselves from the vagaries of the deteriorating legal/financial relations between the UK and the EU.

Ah…practicable separation rather than emotional, i can see some sense in that. We had hoped to enjoy the best of both, but it seems that’s not going to be possible as the ships sail off in different direction.

Anybody else had an “information” email from La Poste about the new charges and processes for items coming in to the EU and agree its going to be a real pain…mainly because of removal of €35 lower value limit.
Basically anything sent from the uk is now going to be subject to a lot of bureaucracy and cost and probably delay …so no presents sent from relatives and friends, not sure if this has hit home yet with many people yet (on this

Could you post it here in any way @strudball? I’m signed up to the La Poste account thingy and have often used it for sending and receiving parcels but I’ve had nothing, so I’m wondering if they’re just sending in batches or if for some reason I didn’t get one. I have to endure weekly nonsense about special edition Asterix stamps or half price on poster tubes, so I’d have hoped they’d have sent something that could actually be useful!

Thanks John, appreciate you doing that!

the basic explanation is here:

“The EU’s ‘low-value import’ threshold, which currently allows shipments of goods worth €22 or less to be imported into the EU without customs duty or VAT, will be abolished so that, from 1 July 2021, import VAT is due on the importation of all goods into the EU. Instead of requiring this VAT to be paid as the goods enter its territory, the EU will introduce a new import one-stop-shop (IOSS) to facilitate the reporting and payment of import VAT on low-value goods that are dispatched by or on behalf of suppliers from outside the EU.”

Some exporters will adopt this, and many i suspect who sell limited number of items which were under the old threshold so were exempt from VAT will not bother and leave it to be levied by the delivery company as per the La Poste information at a minimum likely cost depending on how and when the receiving party pays of about €15… and private parcels will now go through the same route of payment on the doorstep…possibly up to €15
What it amounts to is that it’s going to be expensive, a hassle and probably not worth having anything sent that does not go through the IOSS which is designed for volume online sellers.

Don’t think people have fully grasped this yet!

Hi John… I’m very interested in how this will pan out… thanks for the link.

I’ve read and re-read it… and suddenly realized that it is talking about stuff bought on-line. 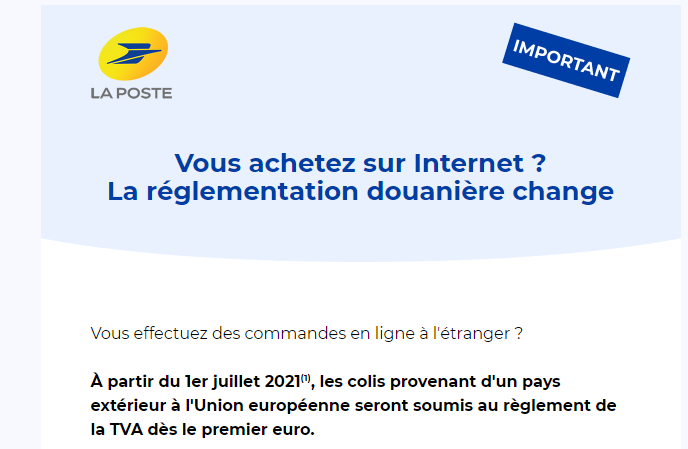 Thus, I’m hoping it will not apply to my Car Magazine subscriptions… those which come from UK.

Can you read it on an iPad etc?

I’m not into such modern goings-on… I like to have a magazine/book actually in my hand.

(It was John mentioning his wife’s puzzle books… that got me wondering about my magazines… but, it’s not life-threatening and if I’m asked to pay extra to receive a magazine, I can make the decision whether to do so or go without. )

Car Magazine subscriptions… those which come from UK

I think it will depend on whether the supplier has signed up for the IOSS scheme as in that case they pay the EU TVA .
The rub is many suppliers who send small volumes to the EU will not …ie those that are not e-commerce operators (who will) will not bother and then the collection of TVA plus handling, plus customs clearance is down to the organisation delivering, with La Poste having a min of €8. It follows inevitably that individuals I think will be in this category so will make receiving presents and all manner of things expensive and longer delays.
A £5 might cost in total an additional €12…a lot for Classic car magazine.
Its really because the Minimum €22 value per item has been scrapped.
I might have misunderstood it all entirely…if so I will be delighted.

Just an addition here before it all gets too emotive!

Documents are in a separate category from goods and seem to be exempt from customs duties so I have been investigating the reasons for all this and seeing what it boils down to.

This has been introduced to stop the import of goods which are not paying VAT where VAT is applicable in France . So, are magazines and other documents, which do not attract duty, also exempt from TVA in France normally? If they are, your magazine subscriptions @strudball should continue as before. I am looking at the moment to see if magazines are VATable but the documents referenced above are all of the overview type and do not give that sort of detail. I shall let you know when I find out, if someone else doesn’t get to the reference first

Like you have @AngelaR I have looked around this to try get some more clarity but the trouble is that as you say a lot is vague and what isn’t often is pre the July 1st changes, if not pre Jan 1st and still talks as if the UK is part of the EU.

Personally I think that as happened in January where a few unfortunate people had a rather nasty shock, then we all tried, and in many cases succeeded, in finding workarounds or adaptations so we’re not being charged 50€ on the doorstep for 20€ of vitamins from Holland & Barrett (or whatever that horror story in The Local was), and life will move on. But maybe I’m being optimistic.

This link is definitely up to date (despite being marked 11 Feb 21)… as is the link that @strudball posted.

(more food for thought, but not for me… changing deep freezers today… brrrrr)

Yes thanks @Sunbeam, I have read that that specific link as I have myself actually signed up for IOSS and it was the place I hoped for clarity, but while it is very clear in what it says it does cover the broad picture so is very vague about specifics. I actually found the process and understanding for my specific situation very clear and straightforward, so I can’t really understand why small sellers wouldn’t sign up for it, it’s minimal extra effort, and the flip side is the potential of lost business and/or lots of angry customers complaining that they’ve had to pay extra charges. If we remember what happened in January, some companies ended up offering to either pay the customers for the extra charges, or reduce the cost of their order which amounts to the same, so the customer isn’t out of pocket and also so they could stem the tide of items being rejected by customers and sent back to the UK, which talking to friends who sell from the UK to Europe still seems to be an issue.