OK, I’ve already mentioned this in my other topic but I thought I’d specifically bring this up as a separate issue.

When declaring so-called UK “government” pensions, which are compulsorily taxed in the UK, the total from 2047 is transferred to box 8TK in form 2042 - and it says in 2047 that this is what you’re supposed to do. Thus claiming a credit for the amount of French tax you would otherwise pay on the pension.

I am advised that this box is available in the 2042 found on the website but that’s not really the point. I much prefer to fill in my tax return on paper having tried the web version last year and screwing it up completely. If this issue cannot be resolved, then I guess I will have to have another go at the online version but I really don’t want to. Please don’t tell me how easy-peasy the online version is - the comments I’ve seen so far are about 50-50.

John,
Did you find anything out re box 8tk? We are absolutely mistified because both the guidance for the 2047k and the 2042k clearly mention that box 8tk must be completed with the amount from UK Government pensions!

Martin… see my reply to your own query

Stella - Yes, 1AL and 1BL are there as normal. I think it will take someone with better French than mine to query this with the tax authorities. It could just be a printing error. 8TK is present on form 2042C (Revenus de source étrangère ouvrant droit à un crédit d’impôt égal à l’impôt français ), which is a pretty lengthy form - section 7 runs to several pages. I suppose you could always print off the last page, attaching it as an addendum, and fill in 8TK but this probably wouldn’t go down too well at the tax office. There’s time yet, since apparently, due to Covid-19, the cut off date for paper submissions has been extended to June.

what is the brief explanationof 8TK on 2042

look at 8TK on the form itself and look at the left of it … it will describe what should go there and, if I recall correctly,this year it is something totally different from last year… is it definitely talking about pensions or just revenue…

unless we are talking about totally different forms…

stella - I think you have the wrong form. On 2042K there is a section 8, right enough. There is, however, NO box 8TK with or without explanation. It DOES exist on the form 2042C which i found on gouv.fr but this is NOT the form sent out with 2047K. Since 2942C is now apparently an ancillary form, I suppose you could print off the last page containing section 8 but this will probably create confusion. Section 1AL and 1BL are the same as last year and as far as I can tellthe rest of 2042K is the same as usual EXCEPT for this f!!>?()}ng box 8TK. I’ve paid for and downloaded Connexions 2020 Tax Guide which gives precisely the same details about 2042 as last year. So no help there.

what does it say beside 1AL this year ???

and downloaded Connexions 2020 Tax Guide which gives precisely the same details about 2042 as last year. So no help there.

No surprises there then

Referring to Connexions Tax Guide Update there is this

If you have foreign income that generated a tax credit equal to the French tax that would otherwise be due on these, such as UK rental income or government pensions, then the box for inserting the total amount, 8TK, has moved from the main 2042 declaration to the 2042C complementary declaration, in section eight (Divers).

So presumably we download ALL of 2042C, print it out and fill in the personal details and box 8TK and leave the rest blank?

Make things awkward, why not ???

The French have a wonderful talent for making things difficult.

They would probably say it’s you being difficult and point to their easy to use online system.

anyone who cannot (for whatever reason) use a computer… is allowed to use paper…no question of being secretly pressured to use online… or anything remotely like it.

there will be an answer… there always is…

Online is the preferred route although paper is accepted for those unable to use the online forms.

and if someone does have form 2042K… please, oh please tell me what is written beside Box 1TL

As the advice I uploaded states. 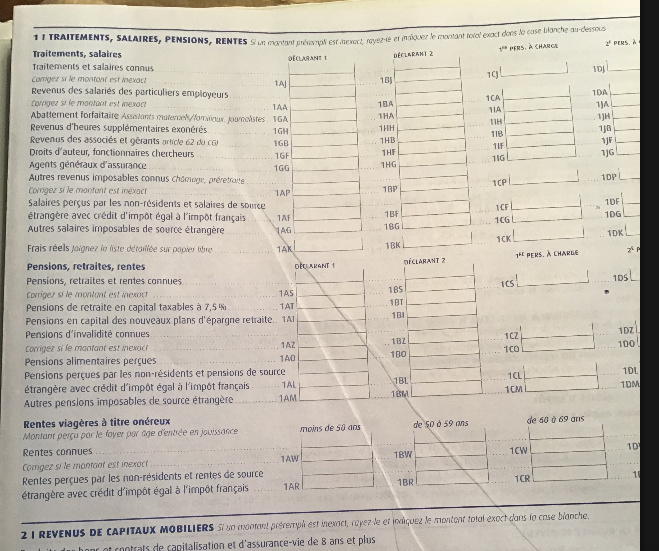 As posted earlier in thread, 8TK (for those with Govt pension or UK rental) is on the 2042C where there are boxes to tick for those who are in the French health system via an S1 (receiving a state pension).
Ref: Box 8SH (declarant 1) and/or 8SI (declarant 2) to avoid paying social charges on interest.