My brother and his girlfriend want to relocate in Ireland and would be looking for advise/guidance. Is there any charitable soul that can help him with things like where do we go to find a job? how to get a rental property? what are the legal steps needed to expatriate there?

I’ll share this link with him too but surely there are some Irish lurking around here as well?

Any advise is welcome and would be greatly appreciated,
Thanks in advance,

The wealth of Ireland comes from the income derived from taking 12 and a half per cent tax from all the tech giants who are based there.
The actual state of the real Irish economy is dire and unemployment is high.
Please ask your brother and his girlfriend to think very hard about why they want to go and live in Ireland?
I am assuming that you mean the Republic.

Thanks for the feedback, very valuable.

Fabien…
I’ve an Irish friend who splits his time between Ireland and France and he reckons each country has a special place in his heart.

What is it, about Ireland, that is attracting your brother and his girlfriend ???
Are they truly wanting to relocate (ie permanently) or just spend some time there ???

I would dearly love to live in Ireland, I have been a massive fan every time I have been there, but the weather, rather too cold and wet for my preference, especially in the SW which is where I would like to be.

As far as legalities go, if he is French no problem, there is still of course free movement between the 2 countries. If he is British, maybe a bit more hassle since Brexit but the Common Travel Area agreement is still in being (though who knows when Johnson, might wreck that too).

For employment, I don’t know, if I had gone there when I was still working there would not have been a problem, HGV drivers are always required, but I doubt that the working conditions would have suited me. I think you will find that most of the Irish lorries you see in Europe today (and in Britain of course) will not have Irish drivers behind the wheel. I think that speaks volumes for the way they are expected to work and the remuneration. it may be similar in other areas of employment too.

In short, a great place to retire to if you don’t mind the weather.

I don’t know why they want to go there, change of air is my best guess

But that would be permanently indeed

Fair enough… I’ll zap a message to my pal and ask him for any pointers… if he’s still around.
I’ve just realized that he’s been quiet rather a long time now.

What sort of work do they do Fabien? That will probably make a huge difference to their prospects. Also what level is their English? They need to start doing lessons tout de suite if they aren’t already good!

My brother’s level of English is same as mine, he works in IT / networks (deploying 5G networks, or whatever is the new tech but not as a builder as an engineer). She is a nurse 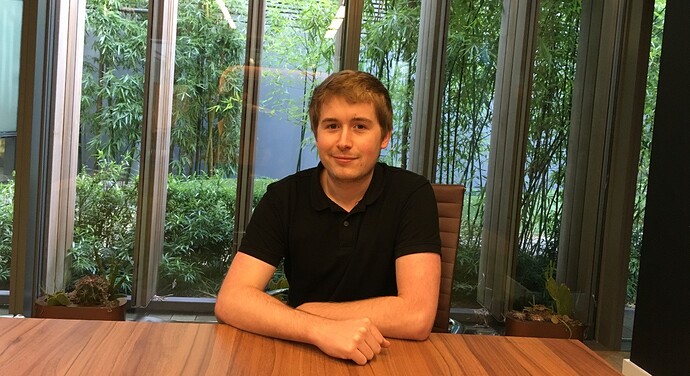 From France to Ireland: ‘I consider Ireland as my second home country’

Romain Valette moved from France to Cork on an internship with Voxpro. Now in the Dublin office, he tells us what relocating was like.

Well i think IT is one of the better options for finding good work and as a EU cit her nursing quals should be accepted there. I’ll have a closer look through all my saved sites to get you more info for her. How is her English?

I can tell them everything they want to know Fabian or point them in the right direction to find out. You have my email already

John have you got a gorgeous Irish accent??

They really pay deux fois rien but that’s still a nice earner for little Ireland. I actually sat (uncomfortably) on a MNC board while KPMG and PWC reassured us directors we were operating within the law. We shipped billions (that’s not a typo) to Holland, only for it to swing back to Ireland again and off into the ether. Colloquially called the double Irish. It’s all over now though.

You are also incorrect, if you don’t mind me saying so, about the “indigenous” economy and the level of non Covid related unemployment. Ireland is booming, the new WW tax laws will impact their Corporate tax take to the tune of €2B PA but, amusingly, while it’s only a relative drop in the ocean, Brexit and the NIP means the (real) UK is suppling NI through Irish distribution centres.

Finally, “Ireland” in English or “Eire” in Irish are the official names of the Republic.

No Tory. Sadly I have the worst of both worlds. In London they think I’m a paddy and in Dublin they think I’m a “Brit”. It’s been that way since I was a teenager. Not so long ago I was in a queue in a Dublin bank and the three people ahead of me started talking about me, nothing too rude, in Irish because they thought I was a “Brit”. When I told them, in Irish, that I knew what they were saying there was some good hearted consternation.

Oh John, I TOTALLY understand! I was 21 when I moved to UK / France. Nearly 10 years later I went back ‘home’ so excited to not be ‘a foreigner’. A month or so after we’d got back I was in a shop (in a touristy town so lots of Brits through - step off to Fraser Island!). The lady at the till said to me ‘how long are you staying?’. I was absolutely devastated, explained I’m an Aussie who’d been overseas for a decade. I burst into tears when I got to the car!

And it is funny, I remember meeting people from my forum in real life (UK based) and they were honestly shocked to hear my Aussie accent as even though they knew I was Aussie they weren’t hearing it in their heads before they met me

Ahhhh… then likely in good times they would have plenty of contract work in Dublin.
Maybe they should go try it out for a whole then decide?
Although probably other parts of the country are different than Dublin, they could explore in their off-duty time and decide.

The one thing that seems to be constant though, is the rain… Are they at least, from Northern France? otherwise the weather might be a bit of a shock…?

Also are they particularly keen to stay in EU. If not then as and when possible I would recommend Australia.

Yes Kirstea, and if I have spotted Tory correctly her video is on the Franco British Network home page! I loved it @toryroo