Sherwood and 'ay oop me dook'

Yes, in my world, I never had a bike with a rear carrier, and can’t remember giving anybody a croggy either, or accepting one.
I prefer to be in control.

Ginnel where I come from. My accent has also almost completely disappeared. As a lad, I had a really thick Bolton accent (keawyed actually, but close enough). Haven’t lived there for over 40 years and lived all around, so Im a mix of different accents.

I’d love a thread on French accents, why, and even dialects.

My ears are now getting attuned to French and I can pick up the variations. Once upon a time, I either understood or didn’t. Now I can hear an accent. Years of Laurent Jalabert on the Tour de France coverage helped, and latterly listening to Jean Castex - one couldn’t not hear the differences!

We’ve a local lingo too (as do/did most regions of France) It’s vocab differences are still celebrated, and the source of amused conversation, but it was once a living, breathing, thriving fully fledged currency of communication around here, rich in its own grammar and everyday vitality.

Ginnel where I come from.

Yes, I remember that, the equivalent of Twitchell and Alley, but are you saying Snicket too? If so I haven’t heard it in that context.

@jwall Yes, I love French accents too and always say Manom (maintenant) Viemme La (viens la), Vam (vin) and loads of others. As a traveller throughout France before my 2nd retirement spending evenings away from home in routier restos with other drivers with widely varying accents, I made the most of my local accent and, although they understood me perfectly well they were nevertheless puzzled by my strange melange of foreign and French colloquialisms. On one memorable occasion the guesses to my nationality went all round the bar, and Europe, before finally arriving at Anglais. I could understand mistaking me for Dutch or German, but Bulgarian.

Guinnell (sp?) in Lancashire and at least parts of Yorkshire

Three ways of croggying.
Ilson a world apart you wouldn’t recogonise the place around quarryhill road.If you wanted a fight go to ilson friday or saturday,stabbing was the thing in Long Eaton on a friday and saturday,Long Eaton still has that rough area reputation.
Twitchel , I would use that but my grandma from Toton would say jitty

I was rescued in 2019 by a Romanian truck driver when my car broke down on the motorway near Chateauroux and I managed to limp to the aire where he and a few others were parked.

He didn’t speak a word of French. I don’t speak Romanian. But he had spent a lot of time in Italy so we got by in Italian. A Moldovan and a Ukrainian truck driver also came to help. But we couldn’t find a common language so everything went in Italian between me and the Rumanian.

That guy got me out of a jam, he hasn’t been back this way to take up my invitation to lunch at our local restaurant near the motorway, I shall have to see if he’s back driving to this part of France again when.Covid feels more gone.

Not the famous L’Escale* by any chance? It’s well know in trucker circles, a haven even, le plus grand routier de France apparently. It used to be open throughout the night but had to close for a few hours because it couldn’t get the staff to cover. Their restaurant do a damned fine seafood platter!

*(sorry about the link, their own web page is ‘down’, and I don’t link to FB pages!)

He didn’t speak a word of French. I don’t speak Romanian. But he had spent a lot of time in Italy so we got by in Italian

I wonder if it was the same Romanian that helped me after he accidentally forced me into the rockface a few years ago. Although our vehicles hadn’t touched, I had nowhere else to go when he took up all the road, but he stopped, put out all the triangles and then stayed with me for 2 hours and helped the rescue man to pull me out before continuing on his way. He was driving a Slovakian tractor pulling an Italian trailer and it was the Italian firm who eventually paid up all my costs 100%. Was this him? The bloke in the blue T-shirt? 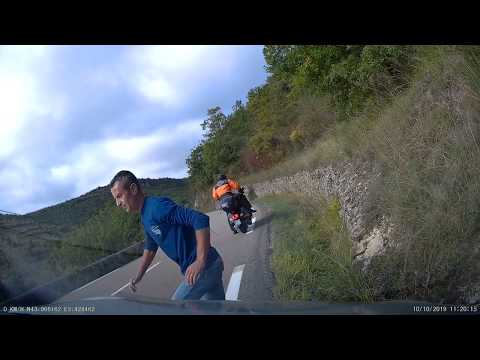 BTW, it wasn’t me swearing, it was one of the dogs.

@jwall Escale became somewhat of a favourite with me and I often stopped there after getting over my initial hesitation because I don’t like service areas and that is what it is in essence. Always a toss up though between it and Sortie Neuf, a bit further north at, you’ve guessed it, Exit 9.

It had a rather eccentric patron (and in the early days his patronne who would perch on a stool behind the bar with a very acceptable pair of legs neatly crossed.

) who one day went out and got rid of all the tables and brought in their place a massive highly polished oval table for us all to sit around. It must have been at least 20 feet in length. He would sit holding court at the opposite end of the bar from his lovely wife, gradually getting more pissed as the night wore on. You can see why I was torn.

No it was the little aire with no services a short way to the North of it - going South.

your Romanian is speaking French

No, that wasn’t him, that was the Frenchman on the moped, the first to stop and see I was ok, the Romanian hadn’t arrived at that point, he was parked around the corner setting up triangles. If you look again you’ll hear me ask, in French, ‘has he stopped?’

Edit: not in French, in fact I spoke in English, but he understood. I had just had a fright, all I could see was those big trailer super singles rolling over me which is why I squeezed over to the right as far as possible, too far.

The Romanian spoke neither French nor English and he got onto his boss on the phone, but not in Italian either, so I am guessing Romanian.

As far as my language was concerned after the expletive the remainderof the sentence was pure Notts
‘I can’t **********gerraht.’

Back to Sherwood, I was really looking forward to watching No. 5 of 6 last night, and was settled in time to enjoy it. Instead 45 minutes of 2 millionaires banging a ball about (well at least one of them is) without a single word from the BBC of apology or re-direction. I kept switching to the EPG to see where it was but it was still listed for BBC 1 and something about Aids on 2. Not till it was almost over did I think to actually switch to BBC2 only to catch the last 15 minutes.

Surely a banner flashing up every few minutes at the bottom of the screen is not too much to ask. Not everyone likes tennis.

Tbf there was a banner running early on and an annoucement by the commentator.

You must have been in the loo

I wasn’t, I was there, but can’t stand tennis so understably wasn’t concentrating hard, but it should have been repeated if so. I understand that many people do like it, but when almost the whole day on 2 channels is wall to wall tennis the least they could do is politely apologise for any disruption to others who are not so enamoured. But as they appear to have cancelled the original BBC 2 programme to accommodate Sherwood, why not transfer tennis to 2 and leave Sherwood where it was supposed to be?