Rats and red squirrels, plus an assortment of other small mammals, the occasional sanglier and quite a big deer …all are visitors to/in/passing by, my garden, more abundantly, now that the river makes a very small barrier between my micro island and their bit of forest.
… So do I have to send the rats away, with fleas in their ears? I remember the rat man in Wales, scoffing at rat - hate. He said rats were no worse than the rest, unless there were specific diseases they were carrying at any given time. And there was nothing.
Ive heard about Lyme disease?.. Not sure…must google that…
I especially like the rats. They are very smart, and they… very soon learned to pose, looking cute, and ask me for snacks. One teenage rat, became so tame, it followed me around, and then sat on my foot, on Sunday. My cat keeps numbers down, I think, by taking out the smallest. But she doesn’t mess with the larger blokes. She isn’t much bigger than the biggest.
Do you think its OK, or will I cause bubonic plague to ravage all Europe, again? Or something like.

There’s a saying “you are never further than 6 feet from a rat” - at least you know where your rats are!
We have them in the compost heap and they are in and around the bushes alongside our terrace. Our mongrel hunter-supremo (like your cat) keeps the numbers in check.
I don’t think I’d want them any closer than they are and I certainly wouldn’t feed them - but then I also don’t feed/encourage squirrels or birds. My view is they are wild animals and should forage for their own survival - as a way to keep nature in balance.
Also, I would be concerned about Lyme disease - rat urine is not always visible - do you really want to risk coming in contact with it?
I wouldn’t worry about bubonic plague throughout Europe, but your own health and well-being. I wonder why you are asking? Are you just being provocative? Or do you have doubts about what you are doing?

Lyme disease is carried by ticks, not rats. Rats carry Weil’s disease which is also nasty.

If they are not in your house and running across your breadboard I’d leave them be. Just don’t leave food around to encourage a population explosion.

Thank you, Jane, I googled Weil’s disease, and read all there was about rats. I depend on river water, for household washing etc, so jolly good thing to understand more about the perils. Nothing enormous, but I’m already careful with the breadboard, because most of my time is outside, tonnelle, life. Everything remotely food- like including my paints, soap, cats things, etc, is tried and snacked on, by my garden rats. Almost a whole huge tube of cerulean blue. Eaten. But no probs. Everything is stored in a metal filing cabinet, in the garden. The rats have tried hard,but so far, failed…to enter.

Yes, my rats are easily seen …always close by. Pretty pale grey, with pink ears and brown, large eyes. Very occasionally I see one inside the house,.All wildlife seems to have a schedule to stick to, the squirrels, eg, are always pinching my hazelnuts, from 9.30 on. And the loud coo-ing of doves begins at 4.30. Some dogs are ace ratters…I know! I had a Jack Russell…she was so fast! It isn’t a good idea, I agree, for wild animals to become dependent on humans, but its more like a social event. If I see them, and they are happy to share for a while, I like to know them all a little. The little chap that sat on my foot, was enchanting.
No, ‘provocative’ would be weedy! The more ancient one becomes, it seems, the less difficult it is to talk about sensitive issues. And the less acceptance/rejection, matters. I’m quite interested in usually taboo, topics? That might be so. Things You Must Not Say? Liking rats might count as a taboo topic, in that case.

Rats are cute but not inside the house. They don’t respect house rules. When they bring all their friends and relations and they scratch and scratch at floorboards and skirting boards, you don’t lie there at three, four and five o’clock in the morning thinking how cute they are scrabbling away noisily at your floorboards with their sweet little ratty paws, you lie there thinking STOP THAT CONFOUNDED NOISE AND LET ME GET SOME SLEEP, I’VE HAD ENOUGH AND I’M GOING TO GET RID OF YOU.

For a small rat question yours is not setting a good example to readers.

This is my example: “Do rats sit?”

I expect an ingenious reader will come up with a smaller one, but mine was just to make the point.

…yes, quite right, Peter. I thought it ambiguous too, (was it a small rat, or a small question?). Alas, likely to remain forever erratic, until I ditch my archos 101d neon, and consume a new gizmo with enough space…, on a screen with zero dead spots,… for keyboard and creative output together. Typing ‘blind’ needs correction, almost impossible, with 50% of screen/touch sensitivity, up the spout. Still, miraculous!

There are 101 ways to kill a cat/lover/ or indeed a rat. But if they are not causing a problem inside the house or eating your chooky eggs, then leave them alone unless you know what you are doing.

I was recently an expert witness because a farmer “allegedly” thrown rodent bait alond a public footpath?

Knowing where when how and if are all factors. Cross contamination is a real problem.

European mandate says permanent baiting is a thing of the past; monitoring with non toxic bait and only baiting when necessary…So, all of you out there with 3 year old sachets in your loft, remove them!

I’ll post an article with regard to modern practices of baiting soon, exclusive to SFN!

…oooooh…always appreciate non-google ‘expert’ opinion… So…Yes?
Post it please. It might clarify, a little.
I would like an efficient, hygienic and caring way, to best live at peace, with my outside rats. Over population can be problematic, although the cat does her best… The perfect solution would be to be aware of risks that are above ordinary wildlife levels. I don’t want to share my sandwiches with the squirrels either. No human food left anywhere for
pee or teeth or little hands, contamination. But I hate any victimization/ adulation of a particular species, because of its chocolate box appeal or lack of it. I love all the beasts on the planet labelled ugly, maybe a bit of a prob with komodo dragons? But only because they are fed live other animals, as a kind of tourist attraction.

Small Rats are no problem, the bigger ones cab be a bit of a handful 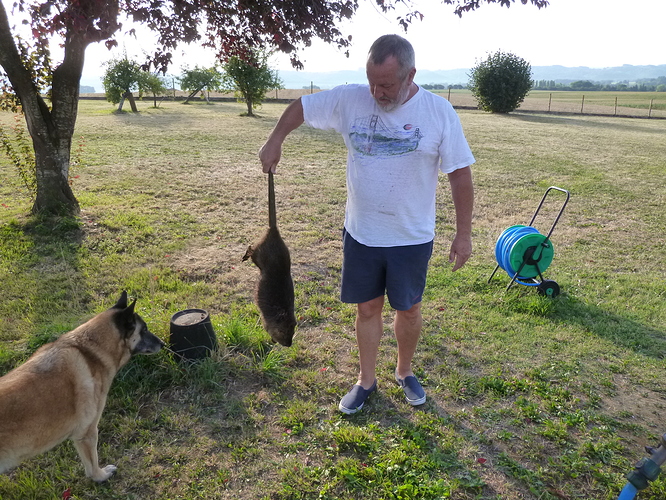 You could throw that on the bbq and feed a family!

Blimey, that’s massive - you sure it isn’t a Coypu?

That isn’t a rat and I hope you let it go instead of torturing it like that.

Yup, I thought coypu too. I presume it’s dead or you’d be missing a few fingers.

Could be…can’t really see teeth or whether it has webbed back feet.

Breaks my heart to see any animal as a trophy or being hurt. I think this fellow must be quite dead, the dog looks bored.