Brexit was/is a disaster IMO.
I recall many comments made on SF and elsewhere that the £ would become worthless (slight exaggeration) against the euro with the distinct probability that £1 would soon not even buy €1.
Pre Brexit sterling exchanged around 1.30 , the day after the vote it went down to 1 20. Since then it has been lower but never reached £ for € and today is trading around 1.16.
Today’s rate is excellent news for those of us who live on sterling income and hopefully this current trend will continue.
I try to make sense of the currency experts various blogs but quickly get bored. So can anyone tell me why those who predicted the death of sterling have, so far, got it wrong.

I think you’re minimising the effect of brexit a bit John. Over 2015 the exchange rate was frequently over 1.40€ to the £, and since has frequently been below 1.10 - and indeed at parity at airport exchange bureaus.
There has this year it’s true been a fairly steady rise from around that level to around 1.15, probably mainly due to the UK-EU trade deal at the end of last year, and possibly the early vaccine rollout in the UK - but I still see the probable loss in the value of sterling attributable in one way or another to brexit at over 20%.
It’s not the death of sterling - but it is a huge drop in the normal course of these things. 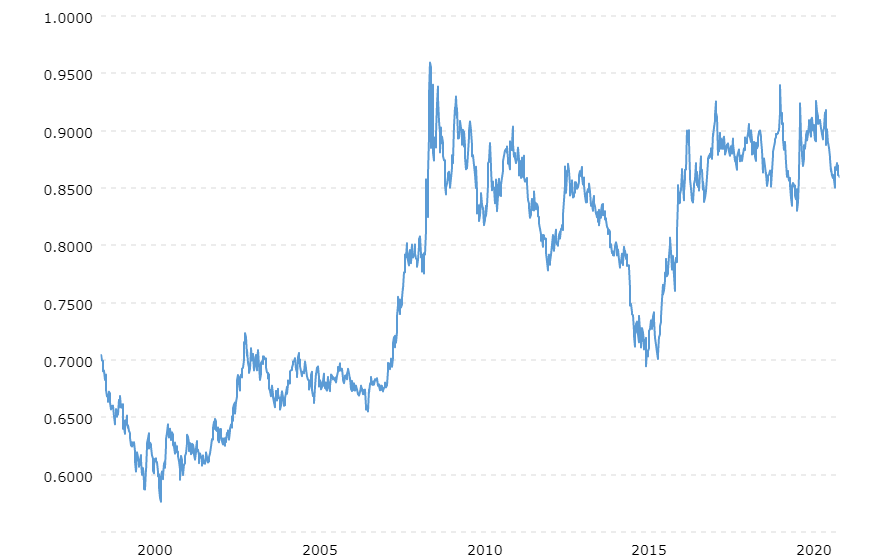 image888×560 13.9 KB
We can all relate to when there were peaks in the exchange rate Geoff.
We bought a house here not long after the Euro went live and the sterling then bought 1.57 euros!!
The peaks pre Brexit were obviously attributable to the idea that Brexit would’nt happen, but it did.
The attached graph shows that the rate now is really quite the norm of previous years and not as you have suggested
’ the probable loss in the value of sterling attributable in one way or another to brexit at over 20%.’
1 Like
anon88169868 May 28, 2021, 2:08pm #4

A lot of the devaluation has been due to uncertainty, thus the markets priced down sterling to reduce exposure to risk - thus you have the paradox that the £ actually went up against the € simply because, even if it’s not especially good, the future looks a bit more predictable.

But you’re not taking into account other factors - eg. the small matter of a worldwide financial crash and the worst banking crisis at least since 1929 - possibly ever! Of course there are many factors (such as this, only much smaller - except maybe brexit) - but I stick by my analysis: I don’t think anticipation of a remain vote would have had much, indeed any significant effect in 2015, but I do think brexit has been the main factor in the loss of value in the £ since 2015.

Of course - you can relate the deepest troughs (below 1.10€ to the £) in the period 2016-20 to points where a hard or no-deal brexit seemed more likely - hence greater uncertainty. The climb back up to 2.15 or so this year is I’m sure at least in part in response to the trade deal actually done at the end of last. If it collapses in acrimony it’s the £ that will fall back more again. If there’s rapprochement - eg. phytosanitary alignment - the £ stands to gain more.

Hence, each person’s State Pension has been down by about €1 200. And I suspect most retired people here have other incomes, similarly %-wise affected.

but I do think brexit has been the main factor in the loss of value in the £ since 2015.

But sterling remained at a similar level from circa 2010 to 2014 to what it has been since Brexit give or take the odd swing which to my mind removes Brexit as the main or any factor.
Dont get me wrong, Brexit is bad IMO but unless I am missing something it doesn’t seem to have had the detrimental effect on sterling that many predicted.

True. And not just state pensions, private pensions, investment income or any Sterling has delivered a drop in Euro terms of 20-25% since 2016. I calculate this has cost me about £125,000 over the last five years.
I hate Brexit!

investment income or any Sterling has delivered a drop in Euro terms of 20-25% since 2016.

If you set your stall out for the future based on 2016 then your statement is correct but the rise in strength of sterling around that time was relatively short lived and returned to the same level that it had been from around 2010 so rather than a loss of Income the period around late 2015 /16 was a bonus.
I am still trying to understand why sterling (thankfully) hasn’t become relatively worthless as many predicted.

If you set your stall out for the future based on 2016 then your statement is correct but the rise in strength of sterling around that time was relatively short lived and returned to the same level that it had been from around 2010 so rather than a loss of Income the period around late 2015 /16 was a bonus.

If you want context I think looking at the whole trend is more use. 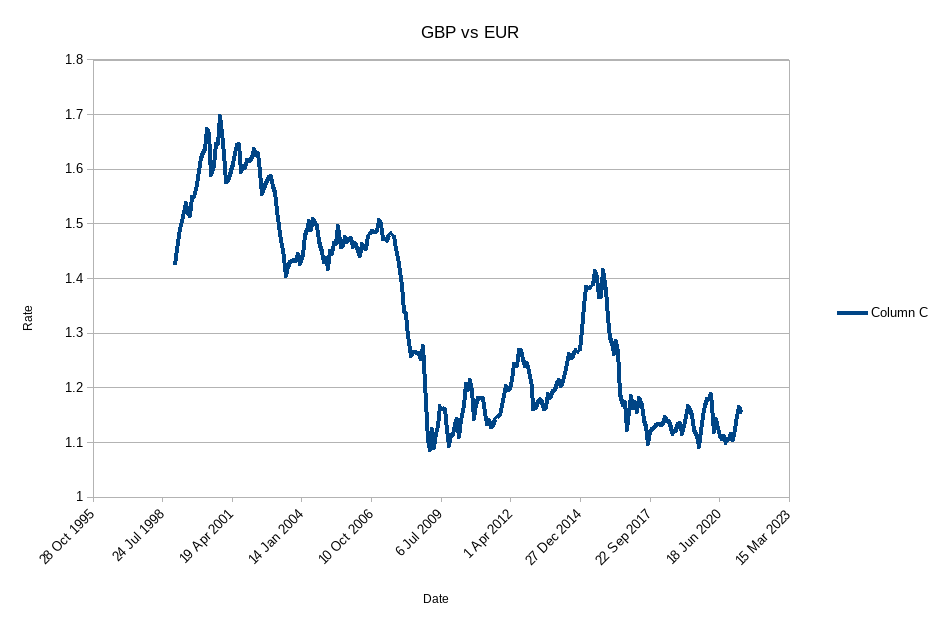 Clearly the big drop was just after the 2008 crash, sterling then gained value steadily up to 2016 (wonder what happened that year

) and has, for the last 5 years, been consistently low compared with its historic ranges - unlike post 2008 no sign of consistent (or any) recovery.

I am still trying to understand why sterling (thankfully) hasn’t become relatively worthless as many predicted.

Exchange rates have their own drivers which are different from the general economy and, importantly, are comparisons of the relative performance and purchasing power for currencies for two (or more) countries.

Thanks @anon88169868 .
Your information certainly helps me understand.
So a badly performing euro since 2014 has more to do with the exchange rate than Brexit?

I think at present we’ve got a small window when the £ is doing comparatively well against the € largely because of the UK vaccination programmme being ahead of the European one. I did think this would be the case for another month or so, but I’m increasingly worried that the spread of the so-called Indian variant might suddenly disrupt the UK’s recovery and adversely impact on the exchange rate.

John, I started building my house here in 2002 (when the £ was arguably over-valued), so I am familiar with its subsequent movements, including the slump between 2010-2014.
As an ex-banker I am only too well aware of the effects of FX on cashflows. In my opinion however, the Brexit vote was a “black swan” event, which totally and abruptly disrupted the normal up and down flow of exchange rates, and has continued to do so since.

So a badly performing euro since 2014 has more to do with the exchange rate than Brexit?

Well, more that a lackluster Euro is propping up the sterling euro exchange rate mitigating the Brexit effect.

Though to be fair sterling is climbing against the dollar at present after being pretty flat post Brexit up until Jul/Aug last year - the take home really is that looking at the exchange rate between two countries in isolation does not actually tell you much about their absolute worth.

I think that Sterling will continue to do reasonably well as it is the currency of just one country that can react more quickly to changing times than a consortium of countries (each with their own priorities) that is the Euro zone.

Exchange rates vary all the time with various causes (most of which have little if anything to do with Brexit), and I do think that when a person is considering living permanently in a currency zone other than where their income comes from, then it is prudent to ask the question as to whether one can withstand a disadvantageous fluctuation of around 30%. Should the answer be ‘No’, then simply don’t do it.

So can anyone tell me why those who predicted the death of sterling have, so far, got it wrong.

I used to invest in shares on the LSE. One of the most telling observations I came across was that the publicised expert ‘share-pickers’ in most newspapers and magazine, on average, did worse than a random pick of companies: that is, chimps throwing darts at lists of companies could do as well.

Furthermore, my hero, Warren Buffet, actually put his money where his mouth is and bet a number of stock-picking gurus that he would beat them over a year if he invested the same amount in a DowJones tracker fund. He won (and gave the whole lot to charity). We know Warren’s written advice to his wife for after his death "Invest in a DowJones tracker’.

The truth seems to be that short-term ‘expert predictors’ have crystal balls that don’t work.

I don’t make predictions and I never will.

(Please take that remark in the humorous vein that is intended). Smiles.

Begs the question ‘how is the Dow Jones tracker formulated’? Did someone develop it or is it AI?