What difference would it make to you …??? 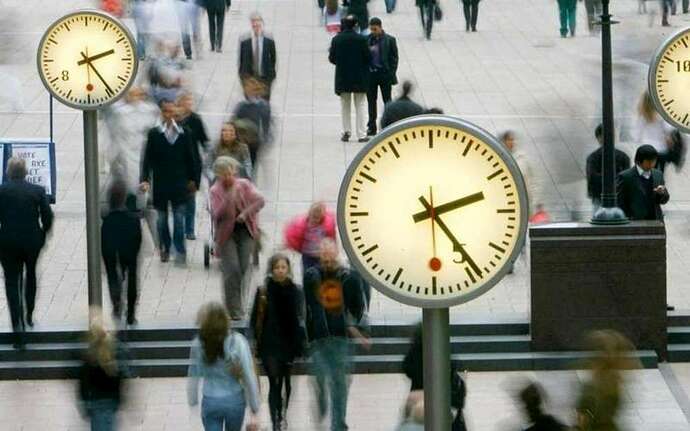 Not a great deal.
When you are retired you set your own hours for the most part anyway.

I’m all for it, stops having to change clocks, and more importantly, won’t have to listen twice a year about how it screws up people’s body clocks - it’s only an hour!!

I voted to stop changing but to keep winter time, other half opted to stop but went for summer time. It’s not a huge problem, more a pain in the arse when you run a business that opens early and closed late. Same thing with the school bus at just after 7 in the morning and getting home at 17h30. Not having to change would avoid a week of getting used to the change!

yep, it’s only an hour but when you’re working long days on fixed times it does take a week or so to get used to it. That’s a week where people are driving around and working etc. a little more tired than normal…

Fine if you are in the correct time zone to begin with.

Brittany and, even more so, parts of Spain are much too far West for their notional time zone (CET or CEST depending on season).

In the middle of winter the sunrise is not until almost 9am in Vannes - permanent summer time would see that move to 10am.

Absolutely, Paul, which is why I voted for permanent winter time

I like changing the hour in March, it fills me with a sort of hope for sunshine and happy long days. Not so keen when the clocks go back but hey ho.

TS - totally agree. It’s wonderful to put the clocks forward in Spring - suddenly there’s this extra hour of daylight before the lights go on … end of the dreary winter evenings and certainly makes me feel the ‘worst of winter’ is over. Before retiring out here, I loathed and hated the dark winter mornings; dangerous for school-children as well with commuter traffic and children going to school all at the same time. Peak rush hour - in darkness - is absolute folly and dangerous. This proposal would make matters even worse for morning rush-hour. And as one poster has pointed out, some countries aren’t even in the geographical ‘right’ time zone to start with. Changing the clocks should be left to each country to decide for itself - not have it imposed upon them by ‘centralised authorities’.

Changing the clocks should be left to each country to decide for itself’.

which is exactly what the EU is proposing

As the person in our house who has to re-set the clocks I’m all in favour of keeping just one time. I can’t tell you how long it takes to re-set car clocks, bedside clocks, wall clocks, camera clocks, and don’t get me started on watches since Mr. H. has a fine collection of various electronic wristwear that requires holding down Button A whilst prodding Button B and confirming with Button C. Several different sets of instructions in tiny 8-point typeface and translated from the Japanese with a diagram that doesn’t look anything like the watch I’m actually holding.

So, in order to regain several hours of my life and be able to do something useful with them instead (like lounging around in the garden, watching Netflix, pinging elastic bands at Mr. H. when he snores), then I’m all in favour of not changing the time any more.

Just be grateful you’re not in charge of the clocks at Windsor castle then, apparently someone is employed purely to wind clocks!

Next year may be the last time Europeans set their clocks forward 1 hour, as the EU considers scrapping DST permanently in 2019. The European Commission, the executive arm of the European Union (EU), has recently pushed to end the yearly clock changes in Europe.

If the initiative is successful, the last EU-wide DST period will start on Sunday, March 31, 2019. Each member state would then have the chance to decide if they stay on “summer time” (DST) year-round or change their clocks once more on Sunday, October 27, 2019 to observe permanent standard time in subsequent years. In that case, the upcoming time change would be the last joint switch from DST to standard time in Europe. ’

I understand the ‘freedom to choose’ in future IS being removed by the eu. Countries can choose whether to be permanently on one time zone or another - but that ‘choice’ becomes permanent… so where’s any future choice then ? And that is an eu decision - so it comes back to what I said about each country should have freedom to choose whether to change clocks twice a year to suit their geographical location or citizens wishes… that’s now being removed isn’t it ?

I wouldn’t imagine anything will change. It’s a regular subject for debate with no changes made.

a choice as to which time zone they choose. Can’t imagine the chaos if some countries chose to keep the same time whilst others chose to put forward and back their clocks, and should we all go back to choosing which day/weekend we change too! I remember travelling through Europe before the change was syncronised - nightmare, especially for air and other forms of travel!

In the middle of winter the sunrise is not until almost 9am in Vannes - permanent summer time would see that move to 10am.

I went to school in Scotland and remember endless Stygian gloom in winter, playing lacrosse in the semi- and then complete dark… lessons with the light on all the time - but then there was summer and the marvellousness of sneaking out at 4 in the morning to play tennis in daylight

There is NO choice; a country will have to decide, under eu regs, that they will be PERMANENTLY on one time zone or another. That’s a choice ? Really ? Seems one or two of UK daily ‘newspapers’ have clocked this one and carrying reports. But the move IS permanent. So no future choice available… which is the point I was making and didn’t seem to be understood.
'Countries would not then be able to change their clocks forward and backward during the year…

My take on this is slightly different, countries will either have to decide to choose summer or winter and stick to it or opt to continue as is. When they’ve done that the EU will try and arrange things so blocks of countries all keep the same time as it were.

Sorry I don’t read the UK presse or have UK television so I don’t know what they’re saying (or why). It seems like a very good idea to me and someone’s got to organise it. Looks like it’s going to come into force in two years now so we’ll have the time to prepare for it. All I know is that I’m going to have to open my shop an hour earleir (oups at the same time but it isn’t is it…!) on Sunday morning and the kids are going to take all next week, as we are too, to get used to it. No worries if you’re retired or don’t work but for those on set timetables with kids etc. it’s a pain and I’ll be glad to see the back of it regardless of whom makes the decision

I’m inclined to think that daylight savings time is “so 20th century”, but if you do abandon it you probably need to get France and Spain and a few other places out of CET and into WET - maybe that will de facto happen if France/Spain choose permanent winter time and Germany permanent summer time.