Will any of you be seeing this magnificent ship… ??? 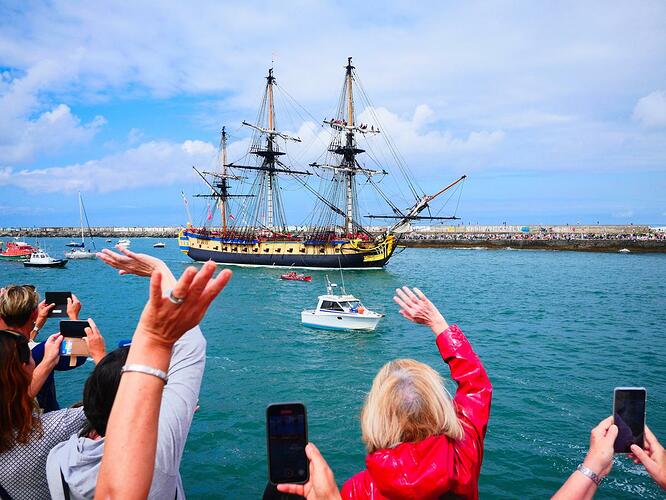 would have been lovely to see!

The first is from the late 1980s during the last days of the USSR, when I went on board a Soviet sailing ship anchored at Boston (MASS). One was immediately struck by the poor condition of the ships’s interior where everything had been coated in thick pale green that was flaking off to reveal deep rust. underneath. The ship’s condition reflected that of the crew had run out of money and supplies and were selling their uniforms to anyone. The city of Boston set up a charity to feed the Soviet sailors and provide the crew with suffiicent provisions for their transatlantic crossing.

The second, was about fifteen years later when I looked out of our dining room window and saw a stange shape on the horizon off the north tip of the Isle of Man, it was Johnny Depp’s Black Pearl under full sail! The house dated from 1759 and all the beams and lintels were made from ship’s timbers, and what I saw must have once been a very common sight from that window - it was a stange sense of recollection of the house’s past and its original inhabitants.

Have just recalled a third TS memory, but had better save that for another post

Currently in Rochefort….looking at the empty berth for Hermione. It seems that her planned voyages this year have been replaced by having to go to the dock at Bayonne as she is infected with champignons and this is the only dry dock this side of France that can fit her in.

I have to say that I hadn’t realised until today that she is just a modern replica!!

I have to say that I hadn’t realised until today that she is just a modern replica!!

Over the years, it’s been fascinating following the progress of the workforce at Rochefort … bringing Hermione to life.