Tennis amid tears and tantrums

Such a shame … put a damper on a great final 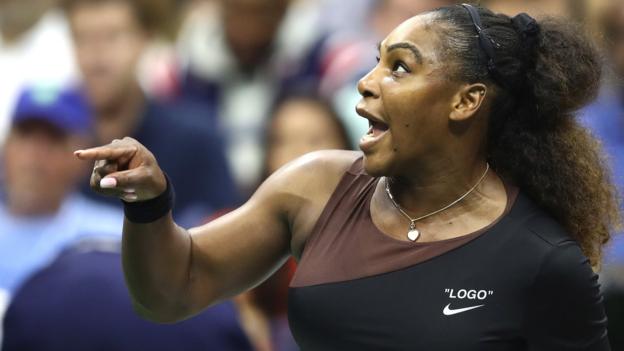 Naomi Osaka wins the US Open after an angry Serena Williams accuses the umpire of being a "thief" in some of the most dramatic scenes at a Grand Slam final.

I don’t think behaving like a harridan furthers the cause of womens’ equality at all.

Exactly what I thought. What a statement for equality when a top celebrity demands the right to be allowed to act like a loud mouthed thug.

I don’t think Osaka was being booed, the ref/umpire got most of the stick. Williams has ‘form’ for doing this sort of thing which detracts greatly from her achievements.

“More boos followed at the start of the ceremony, leading to Osaka pulling her visor down over her eyes to hide her tears.”

Whatever, sad time for Tennis…

I believe the boos at the Presentation Ceremony were aimed at the ref/umpire for not being there, but as you say Stella a sad time for women’s tennis which is going through a bad patch at the moment.

A 24,000 crowd. 23,500 supporting their local heroine and the underdog won while the Great One used gutter tactics. The boos were because the crowd hadn’t got what they’d paid for. No doubt it will be sorted out later today when Mr Trump tweets that it was all a mistake and Serena actually won.

Call me old fashioned but don’t you think that Serena Williams returned to top notch tennis far to quick after having had a baby, what is she trying to prove!!!

I am not a Serena Williams fan, but look at the Duchess of Cambridge, how did she get to look like her usual candlestick self so soon?
These people can afford help, they are not up in the night every night.
They have personal trainers and do not rely on the vacuuming to get their figure back.
I think it is a personal choice as to how long you take before returning to work, although, of course, for many it has to be a purely financial one.

Do not think her return so soon was down to being short of money Jane, but could the outburst be part of the pressure that she has put on herself.

She has a track record even before the baby.