I’ve used computers for 30 years and this is the first time I have received a notification like this.

That in itself would be deeply suspicious to me. Was it an email warning you ? If so, was there a link to click on to see the compromised information ? If so, I hope you didn’t click it …

I have used Norton for years and know and trust them. My only thought was that maybe they were going to suggest extra protection!

The link in the email led to their website which was OK and suggested only that if my passwords were current, to change them.

However, the websites mentioned I have never heard of, or have forgotten, except Adobe. Nothing suspicious here I’m certain.

If so, was there a link to click on to see the compromised information ? If

Just to add, when I clicked on the email link I given a one-time verification code to insert before I could access the Norton website.

Clicking on a link like that, going to what you may think is the Norton website is the most common type of scam. These people can spoof addresses, and make the website you go to look exactly how you would expect. The one-time verification code is simplicity itself to achieve as they know your email address. Also such a thing could be used to lull you into a false sense of security that you are actually talking to Norton. I would never have clicked on such a link.

This is not to say that this wasn’t Norton talking to you, but my suspicious mind would have instantly kicked in, and I think it may be wise to follow this up with Norton, just in case.

Did you actually log into your account on the site you followed the link to ? If so, then I would straight away got to the real Norton site and change your password.

I have a suspicious mind like you and I always check out what I think might be a scam.

I checked into my Norton account separately and found their dark website section and accessed the info they had on which of my usernames/passwords had been compromised - same as I found from the email link.

Thanks for your concern.

When I get an obvious email scam link, one that’s going to ask for bank account details etc, I like sometimes to fill in the info asked for, but with mickey.mouse@disney.com…and so on!

Brilliant. Your suspicious mind did exactly the right thing

. I’ve been a suspicious bugger from about the age of 4, and I’m never going to stop

I had a friend several years ago that loved to troll obvious scam telephone cold calls. He was so good at acting dumb and vulnerable, he could keep them on the line for an hour at a time. They never got anything from him, and eventually, word must have got around about him, because he suddenly stopped getting scam cold calls.

I never answer my phone now because I get too many sales calls, so only answer recorded messages, but if I do answer and get a scam phone call I’ll do what your friend did, thanks!

I did get one once when I did answer my phone, and he sounded so convincing, but I sussed it out eventually and put the phone down. He was trying to get access to my computer. He said he was from Microsoft, and claimed that my computer had flagged up as a security alert!

He rang again weeks later trying again, but I recognised his voice and I was bloody angry and told him so, and his response was to call me a moth***ucker.

Next time if he rings me I’ll do as your friend did. 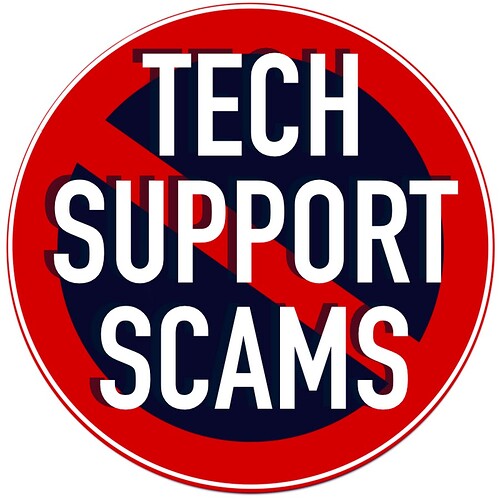 Tracking and identifying scammers who knock my front door, call me or shove popups onto my computer screen. ** Please do not email me asking for help with hacking issues. I cannot help. I require scammers to connect to MY PC before I have any chance...

If you don’t watch anything else on his channel, watch the most recent video.

Some people keep a loud whistle by the phone.

Some people keep a loud whistle by the phone.

What I am doing is keeping a list of all the numbers from unwanted callers to see how many there are, how often they are repeated, and then find a phone that can block them. There’s is a phone, might be a panasonic, that can block up to 1000 numbers. But don’t think it works in France!

Sadly @Bonzocat the numbers are typically fake or untouchable.

This friend had a linux machine, so for the fake Microsoft calls, he would just act really dumb and acted trying to follow thier instructions. The “Start Menu” thing was funny as he didn’t have one. Eventually the person at the other end just got so frustrated thinking he was an idiot, it was they that put the phone down and not him. He did record a few of them, but not sure if the recordings are available.

I’ve quite recently had a spate of cold calls, and what they seem to do is to repeatedly call, but change just the last two digits of the number to try to defeat people who use blockers like you suggest. I want something that can block numbers with wildcards so that it can block blocks of numbers. Can’t find anything like that online, so I looked into designing one myself (ex telecoms and satellite design engineer). It’s not really possible to block a call without the phone ringing once, mainly down to the way caller ID works in France. It would be possible in the UK though.

so I looked into designing one myself

If you ever come up with something like that, which works in France, I’ll be your first customer!

Yes, I did look into it, as before doing STB stuff, many years ago I did telecoms stuff. Thing is, it just can’t be done without the phone ringing once in France. In the UK it could be done silently. The circuit design is fairly simple, and I was going to use a spare Raspberry PI 2 I have to capture the incoming number and check it against a blacklist. I was going to update the blacklist using a button, which would blacklist the last incoming number, or by adding an individual number, or wildcarded number manually via ssh into the PI.
The other thing though is that after so many years as a hardware and software engineer, since I retired, I’ve discovered that I really cant be arsed

Thing is, it just can’t be done without the phone ringing once in France

“Eat” the first ring, wait for the CLID packet, decode it and decide whether to ring the phone or not.

You have to fully control the signal to the phone to decide for the box to work anyway.

I’ve discovered that I really cant be arsed

I have a terrible habit of solving a problem purely in my head, then losing interest.

“Eat” the first ring, wait for the CLID packet, decode it and decide whether to ring the phone or not.

As an ex telecoms hardware and software engineer, I’m a stickler for sticking to the regulations. I even downloaded all the technical documentation for the French (read EU) analogue telephone network … it hadn’t changed much since my time. What you suggest may be technically possible, but would not follow the regulations.
And of course, I reaaaaaly cant be arsed

What you suggest may be technically possible, but would not follow the regulations.

Whilst I can believe anything of telecoms regulations (yes, some of my experience as a software engineer was in the telecoms sector) that does seem a little bizarre - so, you can’t have an answer machine which auto answers with no delay?