This did make me chuckle… 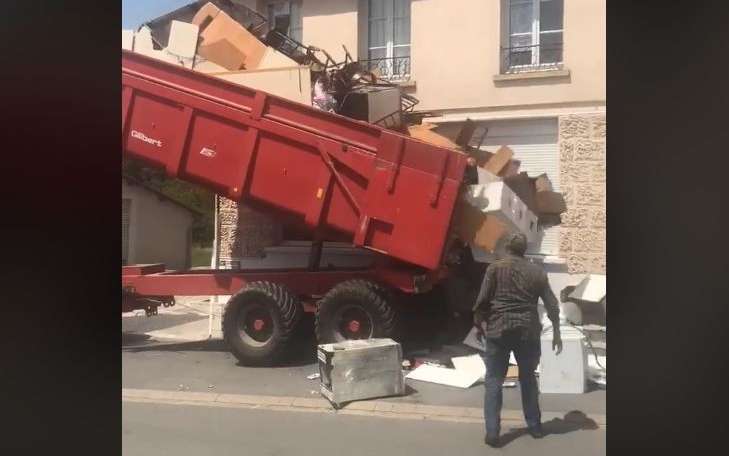 I hope he got the right address !
I once got to see the inside of a house that was being rented by a ‘respectable lady’ and her dog . After non payment of rent and months, and months before the landlord could get her out it was in a dreadful state.
Her dog had left deep scratch marks in all the walls, floors and doors from being shut in . It had also messed in all the rooms, some of these ‘leavings’ were placed in the downstairs bath (I kid you not).
The furniture was only fit for the tip and the whole house was filthy. The landlord ( a French couple who were in tears whilst showing me the house) had to have the whole house redecorated, doors replaced, a new kitchen and bathroom. They then put the house on the market, sold it but were left in great distress and very much out of pocket !

Similar experience… our one and only venture as Landlord… never again.

I don’t understand how anyone can be so disrespectful of other people’s property. We’ve rented ever since we have been in France and have tried to be impeccable tenants. This is our third property and the first 2 we left better than we found and got our deposits back in full on both occasions.

When I was working at the holiday village it always astounded me the disgusting mess that people left, particularly when they knew other people would be cleaning up after them. These were top notch houses, 3000€ per week in August.

The worst was sh*t in the bath

I kid you not!

The next worst was a toilet that had been used all week (just for urinating thankfully) without flushing because the valve was turned off. The smell was indescribable

And the worst culprits were always the British

The house we now live in was previously rented by a drug addict who kindly left all his sh*t (literally) plus needles etc when he vacated, the only reason he did leave was because the water and electric were cut off as he didn’t pay the bills. We had to insist that the owners clear the house before we would complete.

our neighbour in oxford rented through oxford university. 4 girls took it on. they paid deposit and first months rent and after that not a penny.

When they eventually left the house was in a right state, doors smashed, cooker fridge and most appliances broken too. thousands in damages and thousands in rent due,

They decided to sell up too. luckily in prime neighbourhood and when they bought t prices were low and they made nearly 50 thousand in profit even after redoing the house.

I’m proud to say that when my daughter was a student she and her 4 friends were such good tenants that the landlord paid for them to have a meal out. He said they were the cleanest tenants he’d ever had.

Good experience, went off on the boat for a year, so let the house to the Local Council (Scotland), they arranged tenants, rent all paid, house vacated, as agreed for our return and in decent clean condition, it worked well!

You only remember the bad tenants who cost you thousands and not the good ones who cause you no grief whatsoever.

I had a ‘professional’ tenant for 14 years, checked regularly every year until we came to France then had six-monthly phone calls to check all was OK, any repairs necessary, etc. All seemed OK, rent always paid on time then he announced he was moving to Wales with work and gave notice. I arranged to come back and do a checkout but he’d left thirty minutes earlier than we’d arranged. House was … well trashed isn’t the word. He’d not damaged anything, but the neglect was awful. Garage was full of empty vodka bottles so clearly a longstanding problem there. Kitchen appliances had to be thrown away and replaced. He’d left old furniture which, when moved, showed sticky filth behind (spilled booze and general dirt). Toilet was atrocious, in fac there was the original cleaning brush set that I’d left him fourteen years earlier! Cleaning firm took three days, four girls! Had the whole place redecorated. Several skips for rubbish. Garden totally overgrown. Took me six weeks to get the place spotless again. When we spoke on the phone he asked for his deposit and I said " you are seriously joking" and sent him a few photos. He said it wasn’t that bad and that he’d thought if I hoovered up it might look OK … well we had words and after that, radio silence. My point is, if I’d done my annual visit then this would have been picked up earlier. But I moved to France and kept in touch by phone and the deterioration started. On the plus side he’d paid for that house twice over, I had to keep reminding myself. It’s now rented out with agents and I insist on a twice-yearly visit by then, with report and photos.

Unfortunately, there are more bad tenants now than there used to be in the past. I think that a lot see the tv programs about Bailiffs evicting people after the owners have gone to Court . They realise that not only will they get away without paying the rent, the Courts will not penalise them, apart from evicting them.
We let our old house out in the UK as initially we had no idea if things would work out and we would stay. First tenant was a Doctor. Good references. Paid initially then we had to go to Court to get them out. Lost around £6000 in rent, (we were still paying a mortgage on the property) then about £3000 more to get it clean and tidy for the next tenant. She paid her rent on time. Once she left, there was another £3000 to redecorate and replace carpets due to cats having urinated and defecated on them. The defecation was still there! The next tenant was ok for about three years, then became intermittent with rent payments. Court again for eviction! £6000 rent owed. This time I went back to repair and redecorate. I spent £9000 getting it back into order. Next tenant moved in then after a week asked for a rent reduction. They didn’t stay, leaving after six months. The house was filthy. Food on the worktops and splashed up the windows. I had left steaming and polishing machines as well as good polish for the terracotta floors. They were never used. I had to pay someone to clean the cooker (again!). They disputed the cost to clean up, which was deducted from their deposit, but once I showed them photographs of dog faeces in the conservatory, they accepted it.
For the past three years, we have had wonderful tenants who treat the house as their own, which it is while they are renting. The house is spotless and the garden really well maintained. They are proud of how they keep the house. It’s a shame that others don’t feel the same way.
We used to have a letting agency look after the property, but paying them 10% plus VAT for was a serious waste of money, with them doing nothing about the lack of rent payments, or visiting the property.
When I was a Police Officer in Southend, I went to a house to meet the landlord after the tenants had left. The property was fortunately let out via the Local Authority, who guaranteed that the property would be returned after three years letting in the order it was given to them.
The tenants had stripped the house of anything they could remove. Fireplaces, boiler and even an old stock brick wall that used to surround the back garden!

IMO a good letting agent is worth their weight in gold and will reduce issues with tenants.

Whilst I agree that the number of poor tenants is increasing the whole social housing system in the UK is a complete mess and helps neither the tenant nor the landlord.