Trauma of the travel card

OUR FRENCH LIFE - TRAUMA OF THE TRAVEL CARD

Our regular readers will know the trauma that I have had with the EHIC card and trying to telephone to get one for John and I for our upcoming visit to England, there is the long list of recorded messages then being transferred to another department or should I say the wrong department, constantly being told "we don't deal with that here" then being told they can't transfer back and having to redial only to go through it all again and eventually being cut off.

This is the said bad boy card: 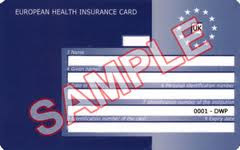 Well today I had to call the International pensions people for John as he is now retired and previously was a dependent on my Carte Vitale, John retired at Christmas and we totally put to the back of our minds that we should sort it out until today when we had a rude awakening, John went to the chemist for his monthly medication to be told they had not been paid for a couple of months - shock Horror - even worse that if we didn't sort it out by next month he would have to pay for his medication, now every time he gets it they print out on his prescription how much it is and believe me you don't want to be paying full whack for it.
(if they had done this on prescriptions in England I don't think anyone would ever moan about the price of a prescription again)
So that sorted - they were extremely helpful although you still got all the recorded rubbish at the beginning, the lovely chap said politely "is there anything else we can help you with today" I said yes can you sort out our EHIC card for us, to which he replied we don't deal with that here, I thought here we go again but no he said do you want it for the UK I replied yes, he said you don't need one for the UK, if you need medical treatment you just give the Doctor or hospital yourNational Insurance number and you will be covered. so after all that we didn't need one but this information might be helpful to anyone else who might be trying to get one - however you will need it if you are going to visit another EU country. Have you had a similar experience? let me know.