As some of you will know, because of the window allocated for residency applications under the Withdrawal agreement, I had to apply for mine just before I had been here for 5 years. I know there are others of you in the same situation. I received a 5 year Titre de Sejour.

I let the dust settle a bit and then emailed the Prefecture (you still can’t visit) to ask them about replacing it with a 10 year card and then sent me a form to fill in. It is very long and clearly designed for non-EU immigrants who have arrived under a Visa arrangement and has lots of additional requirements, such as a diploma in French language, that are not applicatable, as I understand it, to a UK immigrant who arrived before Jan 2021.

As I don’t want to make any more waves than I have to, I contacted the British Embassy for advice (

). I obviously haven’t heard back yet and don’t have very high hopes to be honest.

So - has anyone else in my situation had a go at upgrading their TdS? Any other suggestions?

It may be simpler to wait until your current card expires.
After 5 years residence you automatically acquire full rights, even if your card does not reflect this. You do not need a “permanent” card in order to have “permanent” rights.
I cannot think of a situation where having a five year card instead of a ten year card would make any practical difference to anything.

I agree in principle, @sandcastle, but our bank, for example, accepts permanent (but not temporary) cards as identification. Also, surely I will have the same problem when the 5 years expires anyway? The form I was given looks like one that is normally handed out to (non-EU) people whose cards are close to expiry.

If I recall correctly, there is a difference (with the cards) in how long one can be living “out of France”…

so I hope they hurry up…

I know at least two people on SF in my situation…

Hmm… unless there is an urgent reason to do so… I’d prefer to hold-off contacting my Préfecture at the moment and I’m not even sure if there still is a “Brexit” email address which works any more.
They’ve been amazingly helpful in the past and right up to the beginning of this year… but I think they’re now homing in on the Ukraine/refugees et al…

Yes, I had been thinking that as well, and in my email I apologised, saying that I knew they would be busy at the moment but I’d like advice.

I never did know a Brexit email - only contacted the Prefecture directly but they all vary so much, it’s difficult to know…

this is the email address on the French Govt original website:

I imagine the ministry has an item on its To Do list before 2026, when all the thousands of 5 year cards issued during 2021 will be due for renewing, to set up a procedure for doing this. It will be a new situation for which there is as yet no policy and I do not suppose that prefectures can simply invent a process for themselves. I imagine the ministry will clarify to prefectures what documents they can and cannot ask for and more than likely will build a dedicated online platform like the one they built for the initial applications.
Either way I think we can be confident that the ministry has not forgotten about Brexit and all the new work it has brought!
In the meanwhile, surely a passport will serve as ID and a provisionalTdS will prove your residence rights. I have clipped my CdS to my passport and I show both together as a matter of course.

Thanks Stella - I’ll have a look at that…

I imagine the ministry has an item on its To Do list before 2026, when all the 5 year cards issued during 2021 will be due for renewing, to set up a procedure for doing this.

This is all well and good but if that is the case then people shouldn’t have been told that you can exchange 5 year cards for 10 year ones as soon as you reach 5 years legal residency. Many people just shy of that were able to relax knowing that in 6 months or whatever they would have permanent residence as the official sources suggested the exchange would be possible. Just as people were told that close family would be able to come and be covered by the WA and it would just be a matter of contacting your prefecture and explaining the situation to start the process. If neither of these is true and a central policy/ platform needs to be put in place, that should have been what was said from the outset. People were specifically told ‘you don’t need to do this, but if you wanted to you can contact your prefecture and they will be able to exchange the temporary for permanent when you reach the date’.

Fair enough, I did not know that people had been told that. I assumed, that it was assumed, that if you are given a card that lasts for 5 years, you keep it for 5 years.
However if people were told this by official sources then clearly it is different.
My bad.

As with many things, I think it might depend on préfecture! Some will shrug and say wait until your card expires, and others will be helpful and tell you when and how you can do it. It was raised at an Embassy event and they said you could ask, but there was no process in place and it was not a French priority so don’t hold you breath (or words to that effect!). Also since they have just done all this work for free, since WARP cards unlike all others are free, they may not be too keen to do more until have to!

I would wait a bit, as some préfectures have also been diverted to process urgent cards for the influx of ukrainiens, and try after the summer holiday when officials are rested and relaxed…

This is a quote from. 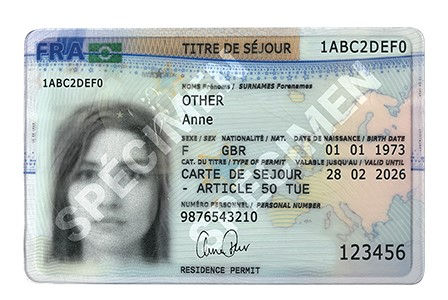 Who does this concern? On the 1st of October 2021, every British National who is resident in France must hold a valid residence permit. Those who were ‘legally resident’ before the end of Transition on the 31st of December 2020 are protected by the...

This has been discussed regularly on RIFT and with the Embassy.

You reach your permanent rights at 5 years and the card you hold doesn’t actually make any difference, it’s only the card itself that lasts 5 years or 10 years.

You can apply for a 10 year card but there have already been rejections and told to come back when the card has expired.

There is nothing actually within the WA that says you must hold 10 year card to evidence your rights only that you must hold a card.

See Article 15 of the WA, It refers to ‘lawful residence’ in the host State Of more than 5 years determining the right to obtaining and maintaining the status of permanent resident. It does not mention having a 5 year plus plastic card.

Some EU countries have decided not to issue cards or other forms of resident status document, as provided for in Article 18 (1).

such as a diploma in French language, that are not applicatable, as I understand it, to a UK immigrant who arrived before Jan 2021.

I was at the prefecture de Dordogne this afternoon getting an emergency passport and saw a poster informing people of the language level, the requirement level is lower than I thought, it is A2 and really truly anyone can get that.

Edited to fix the typos which made me look semi-literate.

I may be shot down, but if you are planning to live in a country then isn’t A2 the bare minimum one needs in order to get by? Doesn’t seem that big an ask to me. (Unless of course one has a physical or mental disability). So WARP people are privileged.

I agree about A2 being a low level, it’s just that I was unprepared to be asked for it, being that it isn’t supposed to be part of the WARP agreement.

I was unprepared to be asked for it

I think this is the cause of much upset/worry for folk (no matter which nationality and no matter what the subject).
When one thinks all is straightforward and someone appears to “throw a spanner in the works” with an unexpected demand.

My mind can go a blank and common sense goes out of the window… and I’m surely not alone.

Re the WARP cards. From what is said/read… I think we need to wait until a few months before the card itself expires, then make the application. By that time, I reckon we might even see a section (tick-box) for these WARP card-upgrades… or at least Prefectures will be enlightened on how to deal with them.

I think it is perhaps not helpful to think as one card as being more “aspirational” than another and hence upgrading or uprating from one to another. As has been pointed out, it is just a card. It’s not like an iphone where having the latest model seems to be important (although I admit I do not have an iphone at all). To us the card may seem symbolic but all the administrations are interested in is the expiry date on it.
It reminds a bit me of the excitement over those “aspirational” blue passports.