Watts in a name?

Talking to a customer the other day about her thoughts on changing her big Audi for something smaller with a view to flogging her a Smart car. She said she would like something a bit more modern & mentioned a Renault Zoe. I was surprised that she would choose an all electric car!

Turned out that she was going on looks alone & had no idea that it was all electric. I commented that I thought that the choice of name was quite clever.

A few years ago I was at a boot fair & noticed a small collection of desk ornaments that someone was selling off which had a nuclear theme - I would guess from a relative of the seller who had passed on.
Among the collection were a few pieces that marked the date that France’s first nuclear reactor came on line in 1948.
It was called Zoe.

I assumed that the car was named after the reactor but I cannot find any evidence of that. If it was it would probably have stopped all the silly campaigns to have the name changed.
Example - https://www.wired.com/2009/11/zoe-to-renault-dont-steal-my-name/
I would have thought the complainers would have been more concerned about being named after a nuclear reactor.

Whatever the true story I prefer mine. 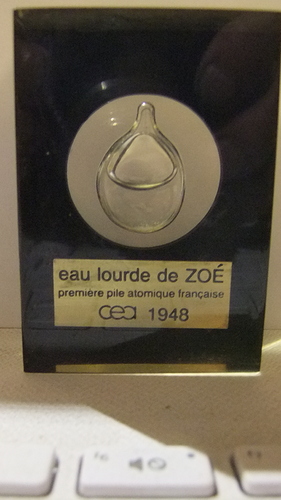