Who said the French have no entrepreneurial spirit?

Somehow we have got through half term without me murdering anyone. This was quite some achievement. The plan was for James and I to be in the UK, scoffing fish and chips whilst stockpiling cheddar and Twiglets. We booked my parents to look after the youngest two and were planning to leave the big ones home alone to deal with the animals and generally keep the home fires burning. Strikes and a diesel shortage put paid to our carefully laid plans. So my child free break turned into ten days of us all lurking round the house. For the first week we didn’t really dare go anywhere in case we used up the diesel and couldn’t get any more. Never mind, I thought, lots of healthy walks and pony riding instead. But no, both girls managed to fall off said pony and ended up too stiff to walk, let alone ride. I put my back out and we thus became the house of cripples.


The teenage nephew removed himself from the equation by getting a job. And a proper one at that - complete with paperwork and pay slips. No mean feat for an English teenager with limited French. However, it has meant that he’s been putting in incredibly long hours - he clocked up 78 this week - so I’m quite glad we didn’t leave him in charge of the daughter and the animals. He’s absolutely brain dead from the effort involved in speaking and working in a foreign language and I’m sure we would have returned to the dogs being fed hay in the kitchen and the horses unhappily munching on a bag of Bonio.


Mind you, that’s teenagers full stop. One moment they are highly articulate, responsible young adults, ready to take on a productive role in society and the next minute, they are sprawled on the sofa unable to do anything but grunt. And should you dare comment on this, they will either start screaming and burst into tears (female), or grunt and leave the room (male). In other words, practising full on adult behaviour.


It doesn’t help that they are being allowed / pushed / coerced by society into growing up so quickly. I was quite shocked to discover that the 13 year olds at Daughter Number Two’s school are being given free condoms. In the main, the kids aren’t using them but are stockpiling them for their older siblings. And this year the condoms aren’t the usual bog standard issue, but ribbed, textured, coloured and even flavoured. The increase in product quality seems to be going down a treat (pun fully intended) and apparently there is a permanent queue outside the nurse’s office. I asked the daughter what all these 13 year olds said, when requesting their contraceptive supplies and apparently, there is a stock phrase. You simply tell the nurse that you “want to go a bit further” and she hands them over. Those who are feeling really brave, say they “might want to do it more than once” and are given bulk supplies; I should imagine they are selling the condoms on - I just hope they have registered with the appropriate ‘caisse’ and are not working on the black.....

No!No!No! Don’t mention the fish and chips! It’s the one thing I really miss … and the Adnams Ale of course. We have found an English couple who do the real thing near Maurbourget, north of Tarbes but only on special evenings, the next being in January. Our friends have sent a postcard of said meal from the UK - what a waste! 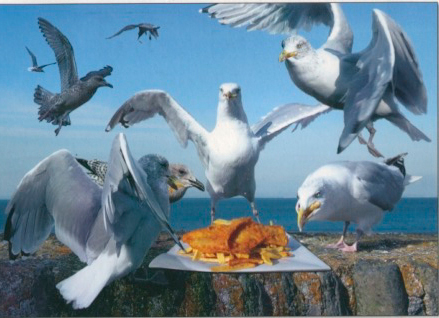