Would love to know

Since this has moved into a thread on supermarkets I’d like to add Auchan.

Although miles from where we now live, and supplanted by InterMarché due to proximity, we still motor the beautiful road across Mont Ventoux to Auchan every so often just for the 3-ply loo paper. Absolutely the best!!

It’s funny - Lidl is a bit like McDonald’s for me. (Though I’ve gone off them in the past year or so for other reasons.)

If you’re travelling and need to get food quickly then you always know a sufficient amount of things you can get to grips with quickly can be found in s Lidl, before you can sort out other choices. They do.vary by country though and often across locations but there is a core of what you know you will find.

You need to try out some of the younger French microbreweries. O’Clock brewing in Yvelines, La Roof near Troyes, La Debauche in Angouleme, Lemovice near Limoges. They make cracking beers - okay, not so many ‘quaffing’ bitters and a lot more IPAs and stouts and the blanche-blonde-brune combination - and are really well worth searching out. But France right now is where England was in the 1980s, you have to go out and look, quite often in the local caviste rather than in the bars.

One thing I’ve found is that I am now vegetarian in the UK as the meat in most restaurants is much lower quality than in France (exception for a couple of pubs where I know the chefs personally and their sourcing is tip top). I didn’t know what steak was meant to taste like till I moved to France.

Same with sausages I was given some well known UK brand pork sausages not so long ago and had to throw them out I could not bear the taste and the amount of water and godknows what else that came out was horrible. At least you know you have real meat here by the amount of fat left in the pan after cooking.

Completely disagree! Have had better, properly aged, grain fed beef steaks in the UK. Trying to buy aged meat here is difficult. And the steak in the average French restaurant relies on salt for flavour rather than the meat.

Fully agree with Jane. Scottish Angus - nothing beats it!

I’ve found all the local Casino stores to be universally terrible with the nearest Géant being the worst. Utterly confusing layout and often low stock of many popular items despite the Intermarché 2 minutes away having shelves full to the gunnels of the very same items.

I only ever darken their doors when a coeliac family meme er is due to visit as they do have an excellent range of sans gluten products.

For me, it’s gotta be aloyau.

We’re blessed in that we have two astonishingly good butchers in the town where we live. The quality is out of this world - even my partner’s brother, who is a trained chef and proper foodie, comments on how lucky we are to have them on our doorstep. We rarely buy meat at the supermarket as a result.

Taking of supermarkets, I find Le Grand Frais too be very good quality, but sadly they’re few and far between.

Real butcher sausages can be as good in UK as in France.
As always, it is what goes into them that makes the difference.
Jesse Smith in Cirencester and Tetbury make wonderful sausages, pies etc.

I wasn’t that impressed with Grand Frais. Maybe it was the layout and the huge shop but the prices were over the top compared to local markets and supermarkets and not much better quality either, Lidl seemed better. Thankfully its the other side of the town so not likely to visit again.

I’ve been moving around the world much of my adult life, but based in France for the last 20 years. A long time ago I used to look forward to my return trips to the UK. Now, even though I still go occasionally and will probably never stop going completely, I get less and less out of my visits. Yes, it’s crowded, expensive and often soul-less there. And everything seems complicated.
Someone above mentioned the British humour, yes, before that was something I missed a lot whether it be people telling jokes in pubs, off the cuff joking amongst both friends and strangers or humour on the TV. Now it seems that Britain doesn’t laugh any more, even that seems to have gone. I prefer to use my British sense of humour on the French, they love it (most jokes translate).

I wasn’t that impressed with Grand Frais

I usually get stuff on the market or at the various bio shops but Grand Frais is a more reliable source of the things I like eating eg shiitake mushrooms beansprouts ginger chillies turmeric galangal etc.

As a new Grand Frais user I agree, I love it but can’t afford the meat ect!

I eat practically no meat, but what I do eat I get from people I know where I can see the beast on the hoof or trotter

Ask your butcher to prepare onglet de veau, it’s a treat, and a pleasure to watch him do it in front of you, We’d ordered it in advance and arranged to get it from our butcher’s mobile shop on a local market. The queue was transfixed as he trimmed the meat as though he was a surgeon. and they asked him for the name of the cut. We’d discovered it in the Au p’tit bouchon resto in Cahors where we used to be regulars.

first discovered onglet de boeuf at our local resto… on their menu du jour.
the chef was worried, as she thought us brits only eat bloodless meat… and didn’t want to waste it on us…

i’m sure it’s just as good with veau

Hope it was rose veal….if not please watch this before you buy it again. 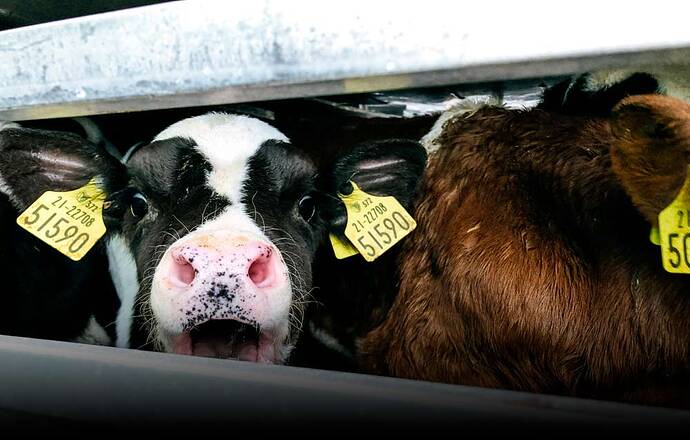 I wasn’t that impressed with Grand Frais.

Sadly for us, our nearest one is good but way too far to go regularly