I remember being very impressed by Fort Dunlop whenever driving by on the M6. I worked in Fiat England on the Great West Road when many other wonderful buildings were still in use for their original purpose. 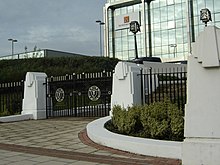 The Golden Mile is the name given to a stretch of the Great West Road north of Brentford running west from the western boundary of Chiswick in London, United Kingdom. It was so called due to the concentration of industry along this short stretch of road. This section of the Great West Road was opened in 1925 in order to bypass the notoriously congested Brentford High Street and several factories of architectural merit were rapidly built along the road to take advantage of both the good commu...

The problem with reserve currencies known as the Triffin Dilemma might be of interest. US exports itself inflation and imports everything else. Hence moves from biggest creditor nation to biggest debtor nation, the predicted collapse of manufacturing in the West all contained in Triffin’s Dilemma from 1959.

Interesting. I didn’t know about Triffin but have just read the Wikipedia page.

Especially interesting that Zhou Xiaochuan proposed going back to Keynes’ original plan for a reserve currency separate from national currencies - ( ‘on almost every point where Keynes was overruled by the Americans during the Bretton Woods negotiations, he was later proved correct by events’) - and that in fact the world does seem to be gradually adopting Zhou’s proposal.

I’m surprised the article I linked - by a professor of economics and public policy at Harvard and former IMF chief economist - didn’t broach this.