Do you have to be so unpleasant about this? Surely I am entitled to my opinion.

I’m not being unpleasant about it and yes, you are entitled to your opinion.

You are not entitled to have my agreement though.

Everyone can have their opinion on whether they think the jury made a mistake or not but that is based purely on the reporting of the trial in the media as none of us were inside the courtroom nor have we seen the full transcript of the evidence etc.

And even if you had seen all of the above jury deliberations are sealed, so you still would not know exactly why the jury decided as they did.

Seeing the evidence would have been good though.

The more I read about it, the clearer it gets that it’s the jury system itself that is now under attack by the right. This just about sums it up: 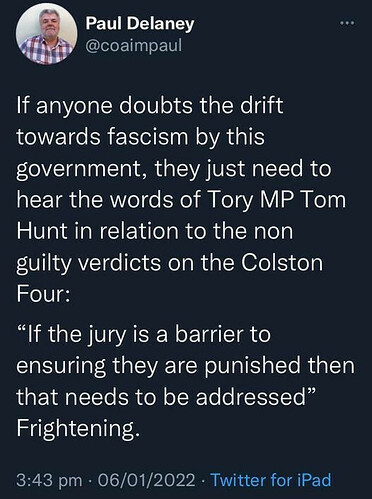 Seeing the evidence would have been good though.

Apply for the transcript.

The more I read about it, the clearer it gets that it’s the jury system itself that is now under attack by the right.

Interesting thoughts here on the issue discussed above of reparations for slavery and colonialism:

Here’s how to repay developing nations for colonialism – and fight the...

The IMF allots voting rights and emergency funds according to an outdated and unfair quota system established in 1944, before most colonies were free. Let’s change it

Is there a sliding scale for payments?

Obviously, Britain, while benefiting hugely from slavery, did put an end to it quite early and then policed the world’s oceans against the slave trade ever since.

Will the sub-Saharan tribes that enslaved the survivors of the continuous wars with their neighbours be made to pay something?

What about the North Africans which actually sold these unfortunate folk to any passing merchant with a few coins in their purses and spaces in their ship’s holds?

France was the third largest slave trading nation and still clings onto it’s colonial past with no sign of granting independence to the various islands etc that it controls. IMO if France doesn’t want to let go then it should at least help the local populations progress rather than live in the squalor and poverty that they do now.

to the various islands etc that it controls.

Do you mean the DOM? If so remember they aren’t colonies or territories in the way eg Hong Kong was, they are an integral part of France.

They may be an integral part of France but they’re totally ignored when it comes to government investment.

Did you read the linked article NotALot?
The proposal is simply to correct anomalies in the allocation of SDRs (Special Drawing Rights) which continue to discriminate against former enslaved/colonised peoples - it would redress some historical and continuing injustice with little impact on the former slave holding and trading nations. The issues you raise are not relevant to it.