I continue to pay tax in the UK, and do tax returns… But I am not resident, or tax resident - and don’t want to be!

And as a resident of France anything one leaves would be subject to French inheritance tax, even if English Law was specified for the distribution of assets.

I really see no benefits, even if I could. It could be different for people in other circumstances.

But the biggest possible dis-benefit to me could be that had I remained tax resident in the UK it could weaken my application to become a French citizen.

I do not think that would wash with the French tax authorities!

Unfortunately Sandcastle it’s quite possible to be tax resident in more than one country. Dual taxation agreements exist to mitigate the effect of this. Though the last version of the UK-France one was worse for taxpayers than the one before in at least one aspect.

Also perfectly feasible to be resident in one country and domiciled in another. The UK certainly recognises this although I gather some other countries try not to.

As I understand it, you can be “tax resident” in a number of countries in the sense that you have tax liabilities there, but normally there has to be a decision as to one country where you are primarily tax resident. In that country and that country only, you declare your worldwide income. In the other(s) you declare as a non-resident and you only declare income that is taxable there. The UK-France tax treaty sets out in some detail the steps for deciding whether you will be regarded as tax resident in France or the UK when you have liabilities in both countries, There are a number of different steps and as I recall the tie breaker if none of the earlier steps is decisive, is, which country are you a national of. If you are a national of both countries then the tax authorities have to look at it and make a decision.

But I could be wrong on all of that as I have no personal experience, it is only what I have gathered from colleagues who were in that kind of situation.

From the tax treaty.
RESIDENCE

As a cross-border worker I believe you are by definition classed as resident in France and therefore you declare worldwide income in France, not the UK. Your only tax liability in the UK would normally on your UK earnings. Interest on UK savings etc should be paid gross as it is not taxable in the UK. That is how it has been explained to me, at least.

You can submit a Self Assessment tax return online by using a 3rd party software such as 123 e-filing or ABC Self Assessment. Like Bryan I have income from a UK property and as such must pay tax in the UK on this income. I have been using either of the above software packages since 2009 without any problems. The income received and tax paid in UK are also noted on my french tax return.

[quote=“Sandcastle, post:22, topic:37492”]
It seems to me that if you tell 2 different countries that you are tax resident (as opposed to liable for taxes) there, the DTA will not work for you. For example if you have a UK state pension it will be correctly taxed at source because you have told the UK you are tax resident.*

Actually, that depends on what sort of UK pension you’re referring to - th e UK state pension should be declared and taxed in France (would that it was sufficient to attract tax!) However, there are other pensions such as Civil Service, local government , teachers in state schools and lecturers in former polytechnics and ‘new’ univeristies, whose pensions are classed as goverment pensions and will always be taxed at source in the UK and declared on a UK tax return, but of course they will still need to be also declared on your French tax form. Scanning and uploading a copy of the relevant P60 PDF should be sufficient even though it’s April to April rather than Jan to Dec

Yes there are specific rules on pension but I carefully chose the “state pension” which I think is how people refer to the old age pension, as an example of an income source that is always taxed in the country of residence. Perhaps I should have used the example of savings and investment income to avoid a diversion onto the subject of pensions.
My point was that in order to avail yourself of the DTA you need to be clear on your primary country of residence, as set out in the treaty. Sources of income that are always taxed in the country of residence, will be taxed twice if you claim to have two countries of residence and declare your worldwide income to both.
I thought it worth making the point because some posters seem to hope that by claiming to be tax resident in both countries they will be able to mix and match and end up better off but I think infact they would end up with the worst of both worlds. For instance their ISAs and premium bond winnings would be taxed in France but not in the UK. Livret A and other investment income that is tax free in France, would be taxable in the UK. Savings and UK state pension income would be taxed in both countries and as a resident you could not ask for a refund.

Are they free? As my old fashioned spreadsheet takes me all of 10 minutes, so it’s just 3€ for postage….

Sadly you have to pay for it. I was working in Saudi Arabia and the postal service was very unreliable so using this was really the only option for me.

When HMRC started to insist that all VAT returns were done via third party software and could not be done on paper at all, there was quite a furore - understandable as prior to that HMRC’s own (clunky but operational) software was free and many small businesses used it but it was withdrawn. Eventually a fudge was allowed using spreadsheets that could be uploaded via (free) third party software. This was a temporary solution and was going to be withdrawn but (fortunately?) we stopped trading before it could be implemented. It’s the way HMRC are trying to go with everything and can be very punitive for individuals and small businesses…

I think I’ll stick to pen and paper! And a stamp…

A while back following a conversation with HMRC I was advised that as a none resident I could not submit revenue from lettings via the government gateway route using self assessment forms but had to do it via 3rd party.
We use selftax who charge £10 per person so £20 per year suits us just fine. Once completed there is a checking mechanism and then it is submitted to HMRC by selftax and we receive confirmation directly from HMRC that they have received it.
Takes about 10 minutes to input data and job done, no stamps and no paper.

But £20……! We have been doing paper returns for our rental income for years and years, and HMRC have never suggested we do it differently.

Just about sums up how totally disjointed HMRC are in their advice, rules and regulations.
After deducting the postage cost with a paper return and not knowing they have received it until they respond weeks/months later then £20 quickly becomes very little difference

If the cost is only £20 for the two of us we’ll certainly give it a go next year. 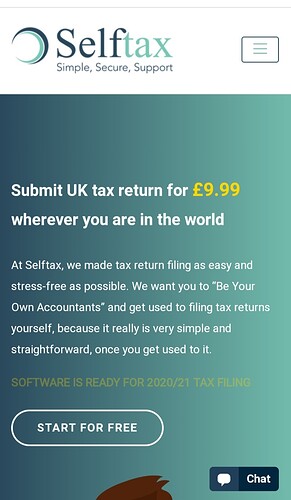