How much of France do you know?

Jane, I am surprised at this post, only because I have never really thought our travels through. From Biscarrosse in Landes with our then younger children to the vendee. Our two go to areas being Jura and Pyrenees, limoux, Quillan, Mirapox, lovely area with varying countryside. Oh don’t forget the Limoux fizzy stuff. I think the later comes out ahead but that depends often on weather and time of year. Cities also are thought provoking, I adore Strasbourg.
Now of course we have somewhere else to explore due to your thought provoking post, thanks

It’s an app called i-InfoTerre. It’s on the App Store and, I guess, Google Play.

Here’s the massif central area. You touch an area on the screen to find out what the colour means. This thread got me chatting with OH and wandering back over the memories…
so many great meals, so many hours people-watching… and not forgetting the glorious surroundings we drove through and where we parked and explored on foot…

Hmmm… Cavaillon… always makes us chuckle… it was there that we first became aware of the dislike/mistrust which Locals (wherever) often seem to have for Parisiens.

The smiling waitress approached the last arrivals who were seated across the garden…
hmm… I was trying to follow the conversation, but in those days, while my hearing was better, my comprehension couldn’t keep us with the fast, staccato language. 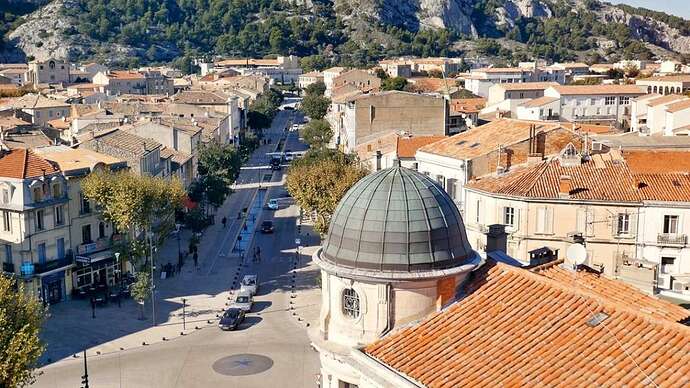 Here’s the massif central area. You touch an area on the screen to find out what the colour means

Now that has just used up hours!! Fascinating, thank you!

My pleasure ! We look at it when we’ve been out for a ride and come across interesting rocks/landscape. Sometimes we look on the map to see, for example, where the major faults are. We use it as the basis for trips out in fact. OH’s geology trips at uni are probably the origin of our interest. And anywhere near the Pyrenees and the massif central offers lots of scope for observing rocks.

It’s nice to hear you like the jura, not many Brits here and when Jane Jones chooses a new area, there will be two less.

I think that’s what surprises me - there are so many wonderful places in France so why do so many people instantly head to or talk about the same dozen or so areas? ( Excluding the cities of course as that’s where a lot of work is).

Paris - love the city since my 20’s. 5hr drive, just reachable for a party weekend. At least once a month.
Then the ‘hinterlands’ of the cote d’azure. I love driving the Route Napoleon.
In the 80’s I had a cancelled trip to Egypt and no time to organize another far away holiday. So just packed a few clothes and did a ‘discovery’ of french produce tour. Champagne, Cognac, Bordeaux wines, Duck, Roquefort, Parfume, Rice…
Took me to all corners of France. Stayed in the small hotels, ate at relais routiers and met incredibly kind producers showing me around.
One of the best holidays.

So just packed a few clothes and did a ‘discovery’ of french produce tour. Champagne, Cognac, Bordeaux wines, Duck, Roquefort, Parfume, Rice…
Took me to all corners of France. Stayed in the small hotels, ate at relais routiers and met incredibly kind producers showing me around.
One of the best holidays.

Fete National in a tiny bordeaux town, woke up with a canon shot and a mad banda circling the town square… hotel, church, mairie and bank. Followed by much fun at the market square, street party and dancing with just about everyone until early hours.
More fun than the Paris festivities - even though they are on a grand scale.
Dad’s family came from Corsica to Germany, wine merchants following Napoleons army. Been a francophile since birth and with family vacations always adding a few days in France (Lac Annecy a favourite) it was a sure thing we would end up here.

Not as much as I should know but always been a bit too busy. Used to know the french alps/chamonix quite well and the coast down towards Spain, but its was a long time ago

(We are old schoold and have books!!

I’m even more old school … I have a geologist

Some of us remember bits of France by restaurants

With me its hotels

poor chap was so sick… following a lunchtime sandwich from a vending machine at a petrol station…
what a mistake that was… never again!!

. Apart from Paris I’ve always lived in the south so this is naturally the part I know best.

I would love to visit Britanny and Alsace, and the cities of Lille and Nantes.

For Xmas and birthdays, we usually get vouchers for Les Collectionneurs , which allows us to stay in nice hotels whilst we explore new places.

Edit: reminiscing a bit as this time last week the missus and I were having dinner at a lovely restaurant on the Île de Ré… First time I’d had in éclade de moules - mussels cooked on a nest of pine needles in an open fire. It was delicious!