I’m not sure this is the solution as few users will know what the flag inidicates. I appreciate the issue though so shall we continue the discussion in a new topic?

Yes please @james Will you port it or shall I start a new one?

Can you do it please?

I think the flag is a good idea…it will mean that those who want to have a focused and serious thread will bother to understand it and use it…and those who, quite acceptably, only want SF for chatty lighted hearted stuff won’t.
I followed a couple of serious topice for which I was hoping for good help/ advice, which included some silly conribitions which meant instead of of keeping to about 30 posts it was double and difficult to follow.
Why not set Grahams idea up, post some instructions and FAQ and see if it is used say for the next three months. If the flagging is not taken up it will die naturally.

I agree with John ,thread drift is fine but if someone wants a serious answer then it can be annoying or even upsetting

Some well-needed lighted stuff… The actor-director Guillaume Canet a few days ago announced the casting for the new Astérix, which will be the 5th in the franchise (filming will start soon, was to take place in China but will now be near Paris, in the Bry-sur-Marne and Plessis-Pâté studios, and in Morocco), it will star the usual heavyweights (this time Cotillard as Cléopâtre, Cassel, etc. + Zlatan Ibrahimovic, his acting debut) and will feature of course the usual funny names ending in “x”, possibly with a Covid/medical sub-theme this time, Ibrahimovic will be called “antivirus” for instance, and the McFly & Carlito duo will be “Radius and Cubitus” etc. The Guardian has this short piece on it.

Anyway, what the Guardian didn’t mention is the funny bit… (summarised here in English)

Hours after Canet announced the casting for the Astérix on Thursday, Jean-Luc Mélenchon, the maverick leader of the France Insoumise party who despite being a tool has a GSOH, hijacked the Astérix announcement on Twitter to lampoon Macron & the government (fair enough) through an Astérix Twitter spoof where the top Macronists are given Astérix-type names, it’s hilarious: 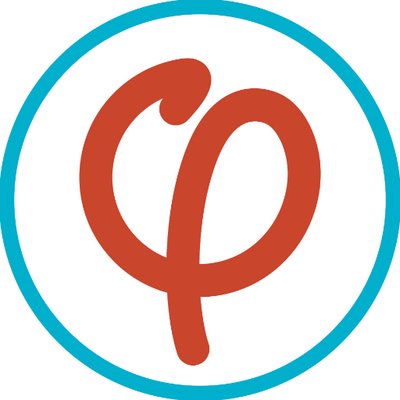 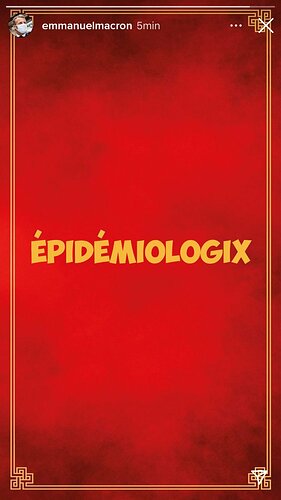 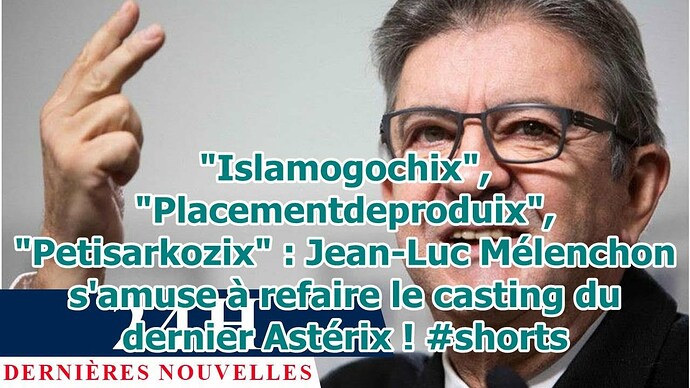 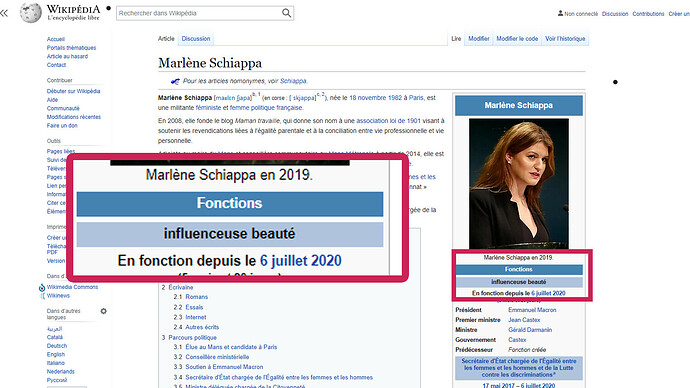 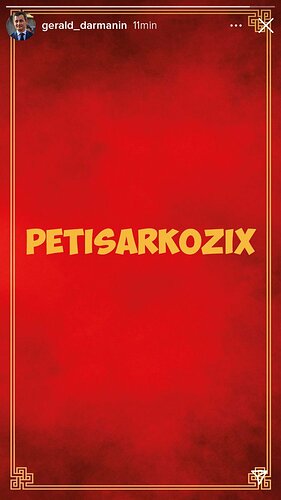 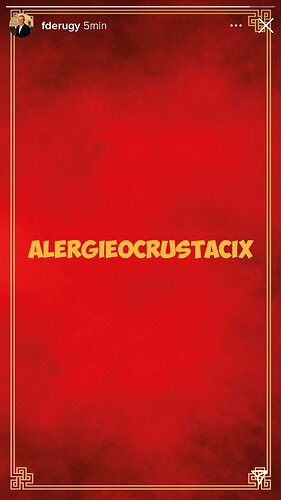 There’s also a “invitéalasauterix” (invité à la sauterie = which could translate as “invited to a party/shindig”), it’s the mysterious minister who the TV channel M6 is saying (without having yet named her/him) attended those posh private dinners in Paris (i.e the “Affaire Chalençon”, that oddball PR stunt-craving Pierre-Jean Chalençon who’s organised, and took part in, clandestine dinners in Paris during lockdown along with “a certain number of ministers had attended” (« J’ai dîné cette semaine dans deux ou trois restaurants qui sont soi-disant des restos clandestins, avec un certain nombre de ministres. »), before withdrawing his boastful comments 2 days later, trying to save face - and a possible legal action for defamation - by saying that it wasn’t true at all, it was just a “humorous April’s fool”, which is nonsense of course as his tone isn’t at all “humorous” in the M6 footage shown by M6, it is very aggressive etc.).

The initial idea of SF was to be able to have conversations on line which flowed naturally, as they would round a dinner table, to differentiate it from other on-line sites.
Whilst Graham says that things have evolved, to my mind it is he who is changing things which do not need changing.
I suppose it makes a change from the maxim ‘Change, change, I see the hand of a woman behind all this’.
This is my good sense of humour.

and just be more clear Jane… the concept is not mine… I agreed with another member to “write it up” for that member.
AFAIK, there is only one topic of this nature currently on the site (which was agreed by the site owners in advance and if @cat has anything to do with it (as she does, of course) there will be precious few others so there is no need for panic attacks so, in the words of David Cameron at the dispatch box some years ago “calm down dear”

and that is my GSOH

Excellent Frédéric - thanks for sharing!

On a more serious note, are churches open during lockdown? The nearest church says nothing on the website, but they are a bit lacklustre and out of date. I went to church online over Easter. I went to Singapore for church. But if churches are open, are there restrictions on the numbers or anything, can anyone find me any info on this?

are churches open during lockdown

I’ve just checked the Chaplaincy in Aquitaine and certainly all the Anglican churches in this part of France are now closed.

Thanks. That may be an indicator that the Catholic church is also closed. The church in the village here is permanently closed and I would go into town for church, but online services are almost more convenient at the moment anyway.

but online services are almost more convenient at the moment anyway.

Presumably your internet is now holding up and behaving itself Annajayne

Thanks Geof (And of course the first sentence in my post should read: “Some well-needed light-hearted stuff”).

I have little time for Mélenchon but he does have a way with words and, despite his aggression and curmudgeon nature, can demonstrate a great SoH and is a brilliant user of social media (his YT channel in particular, which I don’t watch, is very popular, I’m pretty sure it’s the most popular by far in French politics).

I know someone in Marseille (where Mélenchon was elected as PM in the June 2017 Législatives, for the first time - he’d been a minister, a Senator and an MEP before but never a député) who knows him, I myself know this man from Paris, he’s lived in Marseille for 10 years or so (there are quite a few Parisians in Marseille, renting or buying is so much cheaper than in the capital! And the lifestyle isn’t bad either) and works in the Education & arts sector, and anyway Mélenchon has visited their office and workshop a couple of times and apparently he is charm personified, always showing interest in what they did, asking Qs and listening, exchanging on art etc.

You have to try to bring a bit of levity to such matters, and anyway Mélenchon has already started his 2022 campaign and is going to try to do what he did like time, to go “contre nature” and charm the pants off people, it nearly worked last time, as he recorded nearly 20% and was only 600K votes from reaching the second round (given that he started the campaign 6 months previously with low voting intentions, about 10%, he did particularly well. Partly thanks to a woman it has to be said, Sophia Chikirou, his “dircom” (Directrice de communication) during the last campaign, and who’s known as “La femme qui a transformé Mélenchon”) , in a nutshell she forced him to clean his act, smile a lot and be a pussy cat with the media and stuff (as an aside, she also became his lover, the man has taste. She didn’t come cheap, through her consultancy company Mediascop she invoiced Mélenchon’s party €1.2 million, a bill of course footed by the tax-payer as campaign expenses are reimbursed in France for parties who record over 5%, so that led to accusations of inflated invoices - she charged €250 for 10 minutes of work for some prestations -, possibly in cahoots with Mélenchon).

Of course, after the elections, him and his sbires (Alexis Corbière in particular) reverted to type…

Mostly yes, sometimes it cuts out briefly but always has, after all, the signal is all the way from next door and isn’t perefect, and my whatsitcalled which amplifies signal is broken and I can’t spare the money for a new one. Mainly good though. I can get Amazon video and Youtube a lot of the time.