Must be some stored energy but if a simple button press would discharge it then a lot of people would have to re-code their remotes.

Not necessarily - there are lots of suitable memory technologies that do not need power applied to retain their contents.

True, Eprom etc but why would they lose their programming after 5-10 minutes?

Strictly EPROM wouldn’t be suitable as it is write-once - most microcontrollers which have non-volatile memory use EEPROM but flash and (more rarely) FRAM could be used.

but why would they lose their programming after 5-10 minutes?

Possibly because they are relying, as you suggested, on volatile SRAM and a capacitor to keep the supply voltage high enough as batteries are changed.

I only meant that there were more robust alternatives than putting in a slightly too-beefy smoothing capacitor and hoping people only take a few seconds over a battery change.

In the case of the Humax remote it sounds like it is more a question of resetting the microprocessor rather than clearing stored codes from memory.

Thank you for all the replies. I’ve actually managed to find a more helpful tv repairman, who is happy to take a look. He spoke knowledgeably about the subject, so I’m going to give him a try. I’ve already bought 3 additional remotes, in a vain attempt to fix the problem, so that’s why I thought it might be the sensor. Apparently the fact that it works intermittently suggests not, so hopefully he can identify and sort the problem. I know most people would probably just replace it with something more modern, but I hate that everything’s so disposable these days and I’m a recycling, upcycling kind of girl. For now I’m going to try and attempt a repair, but its reassuring to know that if I have to buy a tv in the UK, it will work in France.

Not always - the audio/video data frequency separation in the transmitted UHF signal (non digital transmission) is different U.K. to France I am told. My old portable in my motorhome received picture but not sound when I got to France. Still works fine in U.K.

That was true for old analogue transmissions but digital ones are completely compatible as long as you have a newish set (France switched over to all channels being HD a few years back so older sets that were SD only might not understand the compression).

Edit: Ok, compression *and* modulation thinking about it but that’s a generational thing (DVB2 vs DVB), not a France vs UK thing.

Older DVB-T and DVB-T2 compatible televisions should both be OK. Some had issues with EPGs, although they really should not have as DVB-SI is a standard as well. It’s either sloppy programming by the TV manufacturer or the broadcaster not following or not completely implementing the standard.
You would be suprised (or maybe not) at the terrible support in TVs for various standards. HDMI was always the worst. We had to implement dozens and dozens of individual software workarounds in our STBs for HDMI to work around various manufacturers screwups.

You would be suprised (or maybe not)

Trust me, I wouldn’t 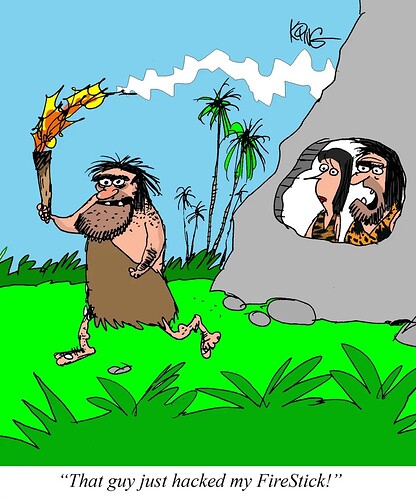 Oh great! Well I’ve just spent £6k on a micro station, so a new tv’s not on the cards now.

I’m in the uk at the moment (unfortunately). I’ve just seen the result of my nephew’s attempt (he was ever so slightly drunk) to turn his flat screen tv into a curved tv using a hairdryer

You must come from the functional brain side of the family.

Oh dear. I thought everyone knew that the best way is to soak the TV in a bath of hot water for an hour to soften it up.

to get uk tv over internet here you will need a decent VPN… or you just get “sorry this is not available in your country”… annoyingly, the Orange livebox will not take, has not got the means to have a built in VPN… so i have a firestick to watch Iplayer and other uk tv… Anyone know how to VPN an Orange router, so the tv will talk through the router/VPN, doing away with the clunky firestick??

Assuming you are resident in France…

If you want leave the Livebox WiFi enabled then you’ll have a “direct” vs “via VPN” choice of WiFi networks.

Would you need to switch off DHCP on the Livebox?

Would you need to switch off DHCP on the Livebox?

Not if you connect it up the way that I describe.

You can also configure things by connecting a LAN port on the 2nd router to a LAN port on the Livebox - in which case you would have to tinker with DHCP settings, but it’s harder to explain how to get it right.

Oh I missed a step (came up in a conversation on the forum a couple of weeks ago) if the Livebox default LAN network address is the same as the one on your 2nd router, you’ll have to change it on the router.

Oh I missed a step (same up in a conversation a couple of weeks ago) if the Livebox default LAN network address is the same as the one on your 2nd router, you’ll have to change it on the router.

I would be tempted to edit your original post just in case someone is following it step by step.

I would be tempted to edit your original post just in case someone is following it step by step.