Got an idea it works a bit like BACS.

It’s about as expensive and arcane as BACS, yes, in fact it’s almost as bad as CHAPS 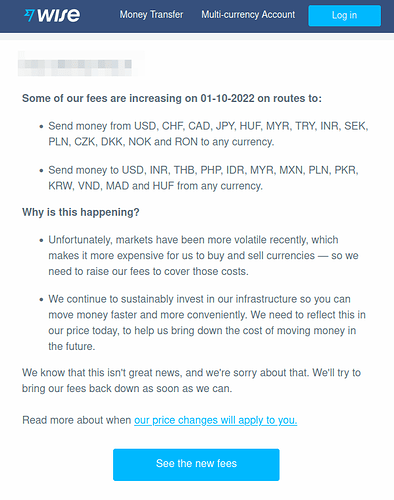 Hum. Weird that their list of ‘currencies we’re increasing our fees for because they’re volatile’ did not include the good old GBP. Which has been very volatile recently and sure to remain so.

Wonder what next month’s excuse for a fee hike will be?

Wonder what next month’s excuse for a fee hike will be?

begs the question doesn’t it… are Wise losing their way?

I used Wise last week - no mention of Plaid, so no idea what that was about! The fees were still good and the rate was also good. I’ve never tried banking with a smartphone as I don’t have one so can’t comment on that aspect.

did not include the good old GBP

Being their home country, they’re desperate for any and all of that to pay the bills

Seriously though, this shows the massive negative with the way they actually work, not actually converting any currency but just rather holding stocks of them all and shuffling it around locally has led to customers having things much cheaper, (although not cheap enough given how little this method actually costs them) and it works very well right until (to use a random example) your EUR pot is suddenly looking a little empty and you then actually have to go out to the market and buy some. People have been saying for a decade that this is the one and only pretty significant Achilles heel for Wise (and the rest of the new breed that follow the same model, travelex etc, I’m not actually singling Wise out) most of the time their costs are much lower… until they’re not, then it’s squeaky bum time as they have to go buy it, and pass the greater cost on, removing their one and only USP.

I still love Wise though. They are currently getting me out of a serious hole because Credit Agricole has decided to make a galère of a simple card switch. This since May 30 while Credit Agricole pfaff around on something that should take them 2 weeks tops.

Nor the euro?
To be honest I do not even know what some of the currencies with the increased fees are,. Certainly they are not ones I use.

I actually find it somewhat reassuring that all that has to be done to resolve “squeaky bum time” is to increase fees, and that, potentially temporarily. I do not see the fact that fees may not always be offered, as a reason not to benefit from the lower fees when they are offered.

Revolut also seem to have reduced their rate , i.e. increase their charge - seems to be from about 50 cents per K to 1 to 1.50 euro on top of pound sterling / wise quoted rate.

You know Kirstea, I think you’ ve just explained why a couple of months ago, some of us were noticing regular transfers were taking very considerably longer (hours or even a day) Whereas previously the same transfer was practically instant.

Perhaps it was then that Wise began to be short of “reserves” and had to go out into the market and buy in order to complete the transaction volumes they were getting? So now they’ve come up with a fee to cover the risk of them carrying more in reserves, or buying further ahead?

Revolut also seem to have reduced their rate , i.e. increase their charge - seems to be from about 50 cents per K to 1 to 1.50 euro on top of pound sterling / wise quoted rate.

Revolut have a clear currency exchange costs statement which details the charges, although there are several variables depending on whether the currency markets are open, the currency being exchanged, how much is being exchanged in a month (there is a 1000€/month no exchange charge allowance otherwise it is 0.5% above that for standard card holders).