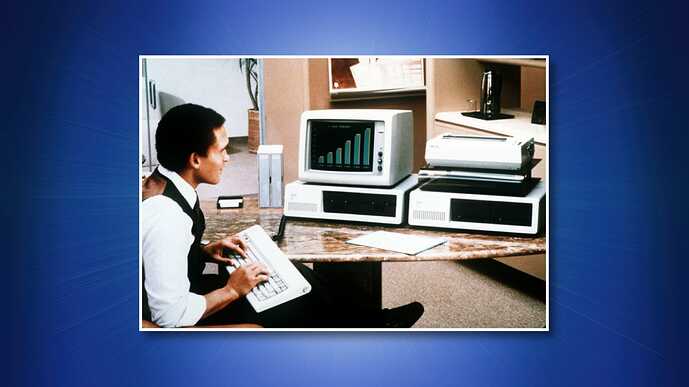 Forty years ago today—on August 12, 1981—IBM introduced the very first IBM Personal Computer, also known as the IBM PC (Model 5150). It sold well and set standards that are still with us today. Here’s what it was like to buy and use one in the early...

Interesting, that first PC used an Intel 8088 processor. A colleague at Intel remembers when IBM were testing the processor at an Intel Lab, it had a divider wall across the room and the IBM folks would appear and ask for assistance / report an issue and the Intel engineers would go off and make a change / fix it.
He said at the time they (Intel) did not know it was going to be put into that IBM machine.

I eventually dumped my one which I bought in the 80’s whilst downsizing before moving to France. Always easy to be wise after the event but it was a piece of history I would have liked to have kept.
The mechanical keyboard was far superior to the others generally available at the time.

Having been a keen Atari ST user I was quite disappointed the first time I encountered a
non WIMP computer at work - the IBM which was used for driving a piece of Israeli telecomms gear which was itself much more impressive enabling 240 channels over a 30 channel link (DCME). There’s a computer shop up the road with an early Mac in the window which looks rather tasty with it’s little crt screen and integrated floppy drive. I was an early convert to Mac though I only had the ‘cash to spash’ in more recent years. They also had a BBC at work programmed to de-ice antennas.

The company I worked for at the time did the UK launch event for the first IBM PC. Little did we realise where the path would lead.

I was working in the PC industry for a manufacturer at the time of the IBM PC launch. Prior to this there were no standards. There were many word processors all with different formats, ditto spreadsheets messaging etc, so a document written with one package or spreadsheet could not be read by a different package. The IBM PC was not the best PC by any means but it gave the industry a standard. Just about every manufacturer switched to making clones of the IBM PC. Lotus 123 became a de facto standard for the office and we had inter operability. Then along came Microsoft and they gave us a standard set of office apps and a standard Operating System with Windows. Much criticism is made of Microsoft but before IBM and Microsoft set the de facto standards it was the wild west. It was the most exciting time of my career. That is until the Internet arrived!

In those day IBM was a more secretive organisation than the CIA. This was driven by the many years of antitrust battles and Japanese industrial espionage. All documents were classified, even unrestricted ones were stamped IBM Internal Use Only, and all IBMers stuck rigidly to the rules. All photocopiers has a serial number burnt onto the drum so that all photocopies could be traced back in case of an information leak.

Unfortunately, a side effect of this secrecy was that none of the IBM divisions had a clue what the other divisions were up to. So nobody had a helicopter view on how IBM’s internal technical might could be shared and brought to bear on developing a new Personal Computer. Thus the extraordinary (and unbelievably myopic) decision to use off the shelf OEM parts and S/W was taken.

Soon after the 8088 was chosen Intel got into financial difficulties and IBM, fearing supply issues, took a significant shareholding to steady the ship. Yet another titan of the industry that owes its success to IBM.

No, it was a 16 bit processor, identical to the 8086 - it just had an 8-bit bus interface - which made interfacing to existing 8-bit infrastructure easier.

I was hired by IBM Finland in 1984. The IBM PC arrived that year and I was one of the first to get one, with two diskette stations and monochrome display. Later I upgraded to the Model XT with a whopping 20MB hard disk.

with a whopping 20MB hard disk.

I had one of those in the one I bought… my first reaction? I’ll never fill that!

I remember installing some machines in my wife’s office.

Don’t recall which flavour of 80x86 - it would have been in the early 90’s so 486 or early Pentium but I recall they had “massive” 80Mb hard drives (and 4Mb of RAM) - sobering to think that you can put more computing power in a wristwatch these days.