A young American's experience in France

I thought I would share this account of a young woman who tried to settle in France.

What happened when I tried to become French

Frustrated with life in New York, Channon Hodge quit her job and packed her bags for southern France, met a French boyfriend and tried to learn the language. It didn't work out quite as she planned.

a young woman who tried to settle in France

Poor girl. Airhead. She didn’t really ‘try to settle’ though did she. Still an interesting experience to look back on. Really shows that wherever you go you take your baggage with you.

Yup, American airhead at that.

I did agree with her comment : “I didn’t get all the constant anger at the government.”
I’ve decided it’s because, in the UK, it was always unusual for most people to be at all interested in politics or the government. Whereas French people are much more aware, because of their education?

Your comment surprises me, my experience has been roughly the opposite!

Whereas French people are much more aware, because of their education?

Possibly but possibly also because we discuss politics a lot, at mealtimes, with friends etc.

Here comes a huge generalisation: I think we are conditioned in France to talk about these things with more distance than in the Anglo-Saxon world; we don’t, I think, take things as personally. So you can have a discussion at a dinner party and tell someone their opinion doesn’t hold up because xyz and they can counter by telling you you are wrong because abc and that won’t alter your relationship - whereas British people in particular avoid that sort of conversation and flee conflict because if they disagree it might means someone gets thumped (esp as they all drink so much they are likely to be a bit drunk).
It is OK to disagree and call each other idiots etc, c’est de bonne guerre. You see it at cafés, lots of gesticulating and squawking for a bit and then time to go, everyone shakes hands does la bise and disperses. The wife-beater wearers would be rolling around snarling and whacking each other.
My ex husband who is English pointed this out, I must say I hadn’t really thought about it, although I had noticed people from the UK being generally much more sensitive than we are, which is why you don’t go shopping with them unless they are ultra close friends because they will never say ‘you look terrible in that’ but pussyfoot around and you’re supposed to realise they think you look

That I agree with! Took me a while to let rip in a dinner time debate and then be all smiles by the cheese.

The number of times OH and I tell each other not to be so subtle! We have been dropping our sort of hints to local man who is supposed to be installing a shutter for us. He cashed the deposit cheque in September, but still no shutter…our hints are far too English!

The correct English for ‘you look terrible in that’ (especially if it’s husband to wife) would be something like: ‘It’s nice, but doesn’t suit you as well as [some other garment}’, or ‘you look great in anything, but perhaps it would be better a little [shorter/longer/brighter/paler/etc]’.

My correct English for you look terrible in that dress, those trousers etc is “the socks are a great colour”.

It must be a minefield for you blokes

‘It’s nice, but doesn’t suit you as well as [some other garment}’,

I have learned from experience that using the word ‘nice’ is unacceptable when voicing my approval for my wife’s clothing or for a new haircut. I carefully avoid the word!

Well explained! I’ve been to several association lunches where a few people appear to be having violent disagreements - going at it hammer and tongs to my mind, and disrupting the meal. But no-one separates them. Even the mild-mannered ones are tempted to join in ! And later they’re all sweetness and light. With British aquaintances, never seeing them again would be the result. Thank goodness for Dutch friends who always say exactly what they think but don’t argue. Very refreshing and uncomplicated.

say exactly what they think but don’t argue.

We love arguing. Arguing is fun, it is a way to explore all possible avenues around a question.

Although if shopping with my british friends I don’t need to be so explicit. If I started muttering about socks the offending article would be back on the hanger without the need for another word!

So these things work very smoothly within cultures, we just can’t expect another culture to absorb the nuances along with the language. 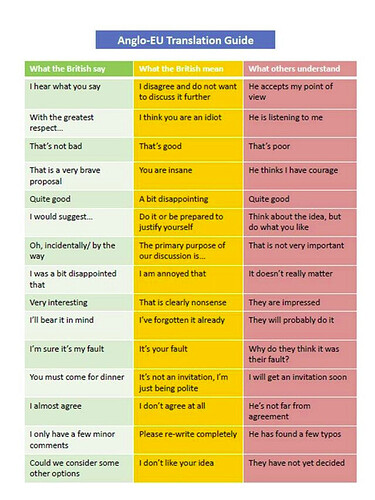 Although if shopping with my british friends I don’t need to be so explicit. If I started muttering about socks the offending article would be back on the hanger without the need for another word!

Probably you wouldn’t even need to mention socks just "well… " would be enough.

But with a Fr person you have to be more explicit, nobody will be offusquée if you say “ça te boudine/te fait un gros cul/ ne te met pas en valeur/fait pouffe”

@Geof_Cox I love this and give it to my pupils, they find it illuminating

You may try teaching, British understatement, that should be a laugh.