An obituary from the London Times

An Obituary printed in the London Times…Absolutely Dead Brilliant!!

Today we mourn the passing of a beloved old friend, Common Sense, who has been with us for many years. No one knows for sure how old he was, since his birth records were long ago lost in bureaucratic red tape. He will be remembered as having cultivated such valuable lessons as:

Common Sense lived by simple, sound financial policies (don’t spend more than you can earn) and reliable strategies (adults, not children, are in charge).

His health began to deteriorate rapidly when well-intentioned but overbearing regulations were set in place. Reports of a 6-year-old boy charged with sexual harassment for kissing a classmate; teens suspended from school for using mouthwash after lunch; and a teacher fired for reprimanding an unruly student, only worsened his condition.

Common Sense lost ground when parents attacked teachers for doing the job that they themselves had failed to do in disciplining their unruly children. It declined even further when schools were required to get parental consent to administer sun lotion or an aspirin to a student; but could not inform parents when a student became pregnant and wanted to have an abortion.

Common Sense lost the will to live as the churches became businesses; and criminals received better treatment than their victims.

Common Sense took a beating when you couldn’t defend yourself from a burglar in your own home and the burglar could sue you for assault.

Common Sense finally gave up the will to live, after a woman failed to realize that a steaming cup of coffee was hot. She spilled a little in her lap, and was promptly awarded a huge settlement.

Common Sense was preceded in death,
-by his parents, Truth and Trust,
-by his wife, Discretion,
-by his daughter, Responsibility,
-and by his son, Reason.

He is survived by his 5 stepbrothers;

I’m not one to read the obituaries, but that one I enjoyed

Very good @Gilly2 many a true word spoken in jest.

They have been publishing that same obituary in The Times since its inception in 1788.

Common Sense finally gave up the will to live, after a woman failed to realize that a steaming cup of coffee was hot. She spilled a little in her lap, and was promptly awarded a huge settlement.

Go look this one up - the plaintiff’s name was Stella Liebeck.

McD’s were known for serving coffee not merely hot but scalding - there had even been previous complaints and she did not “spill a little” in her lap but the entire cup, causing 3rd degree burns, requiring skin grafts and resulting in permanent scars.

Despite all of this Liebeck only wanted her medical costs - it was McD’s that forced the case into court and lost.

Common Sense took a beating when you couldn’t defend yourself from a burglar in your own home and the burglar could sue you for assault.

This one has to be a bit of a myth as well. It has never been illegal to use reasonable force to protect your property up to and including lethal force. The problems start when the force used is unreasonable.

I guess, though, that there is nothing to stop a burglar bringing a private action against a home owner - I mean, you can sue anyone for just about anything if you want.

In any case assault is a criminal offence (as well as a tort) - so it would not be the burglar suing but the state prosecuting (assuming the accusation had merit).

There is certainly a failure of common sense in today’s world - but part of it is a willingness to jump at every tinkling bell of a story, frothing at the mouth rather than actually bothering to spend time checking them out before hitting the “share” button and reaching for hyperbole as you pass on the details.

And has this ever, actually, been published in the Times?

PS, yes I know this is supposed to be “funny” but mostly it is very weak humour given the number of factual errors.

I think that you have to go with the sense of this. There seems no middle ground anymore.

There seems no middle ground anymore.

There is a middle ground, but it has no floor to stand on, no sides to hold on to, and no constant point of reference to give direction. It is in constant and unpredictable motion, but we are buoyant, and need to make enough sense of it not to drown, but to celebrate our capacity to know it, and that we are the “it” which we know.

I think that you have to go with the sense of this.

Not really, at least not with that selection of “examples” - they just re-enforce misinformation. 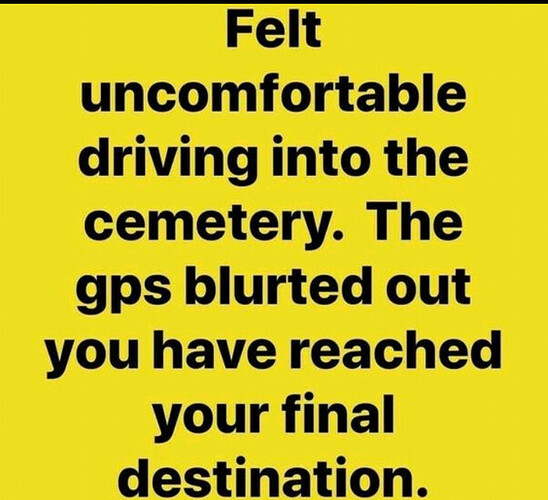 A road sign I used to see from the bus on my way to school every day read, ‘Crematorium’ and underneath the sign for ‘One Way Street’.
This was at the start of Powderhouse Lane between Torrisholme and Lancaster.