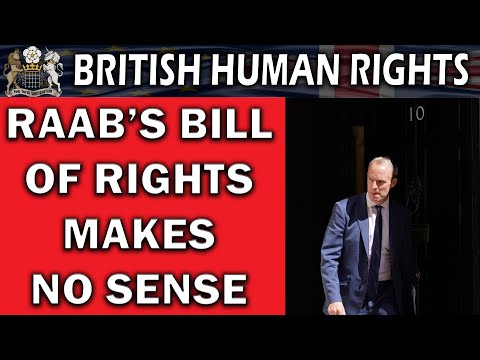 Just received this from The Humanist Association:

Practically every right enjoyed by non-religious people - be that to equal treatment, or freedom of expression, or freedom of belief - depends on [the Human Rights Act.]
Today, the Government has announced its ‘Bill of Rights’. This would strip away the legal basis by which we can fight for equality for the non-religious and would set us back hugely: on marriage law, on faith schools, on the school curriculum, in relation to our celebrancy and pastoral care services, and even things like local Remembrance services and Thought for the Day . It would surrender power to traditionalists and anti-humanist forces.

Has the government got nothing better to do? We signed a perfectly good Human Rights Convention. How are they justifying the waste of time tinkering with something that doesn’t need fixing except for the capitalists that find human rights annoying?

I think that’s being too kind - more like the ones who pushed kids and women aside to get on the lifeboats first.

Each time I’ve watched Titanic, I’ve always found it very moving… musicians doing what musicians do… playing music… and, let’s face it… there wasn’t much else to do.
Women and children first… and the rest… let’s keep calm and face our fate as best we can.
I hope I would find it in me to be so brave and NOT panic…

Its just further diversionary tactics to deflect attention away from the Crime Minister and his continuing law breaking. It will of course appeal very much to the swivelled eyed loons in the ERG and the equally bad Tory faithful generally but right thinking people - who hopefully are voting with their feet today in the two by-elections will voice their opinions on this crazy diminution of rights.
What next?
Pensioners living in the EU having their “benefits” (aka State pensions) taken away entirely because we have the temerity to choose to live in a free society? I kid you not… the dreadful Coffey is probably already drawing up plans for it (in spite of her addressing herself with French accents on her first name).

The band on the Titanic knew how to play, This Government is more akin to the deckchair shifters, except more arrogant.

Drafted and then signed BTW.

Yes Geof, I agree growth can’t go on forever, but what I really found interesting wasn’t so much the economic analysis but how a publication which is “caught in right-wing ideology” as you put it (I’d be a bit tolerant of them, but maybe that’s due to my background) was so disparaging of a Tory prime minister, not just criticism but real contempt IMO.

Even in the rightwing press, which has played such a huge part in sustaining the Tory ascendancy, there is a growing sense that the country is on the wrong track. “Why is nothing working in broken Britain?” asks Josh Glancy in the Sunday Times. In the Telegraph, Sherelle Jacobs despairs that, “Mediocre Britain has resigned itself to a heartbreaking cycle of decline.” The Economist calls Britain a “stagnation nation”, “stuck in a 15-year rut”. Four-fifths of that “rut” has been dug by Tory governments. 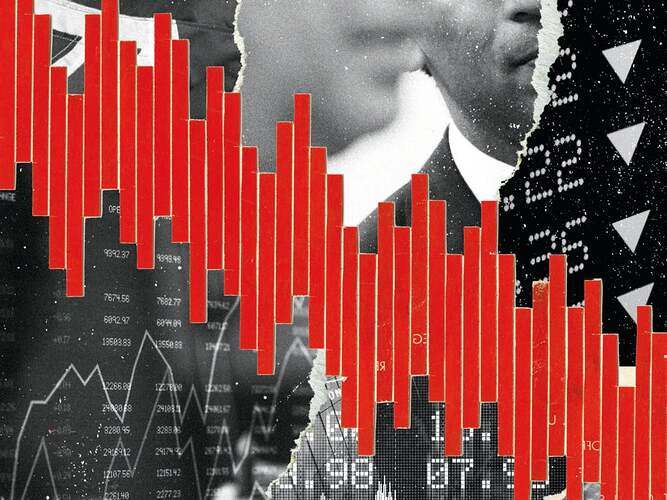 Why Britain is once again the sick man of Europe

The UK is predicted to record the worst economic growth of any major country except Russia next year. What has gone wrong?

It will interesting to see what sort of ‘spin’ Johnson puts on the by-election losses and resignation of the party chairman.

I think he’s “diverted” at the moment, trying to convince Charles in Rwanda that his hair brained scheme to deport asylum seekers to Rwanda is well, hair brained 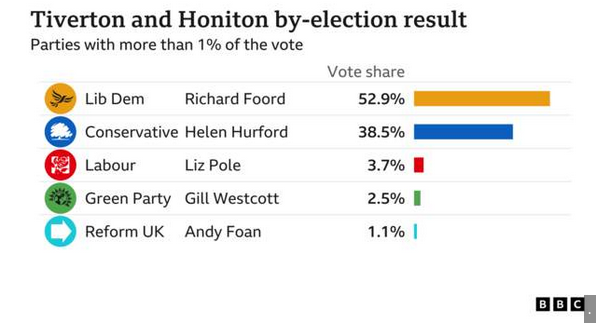 Not merely a pair of losses for the Tories but they were trounced in both seats.

There is, however, some evidence that it is Johnson, rather than the Tories, that voters are blaming for the mess. Although this is hopeful the worry is clearly that a change in leadership might see the Tory vote bounce back (there again with the candidates available for the post at the moment, maybe not).

The level of tactical voting will scare the living daylights out of the Torys.

You could always hope so.

IMHO, given the current economic outlook and a bunch of other issues (eg NIP, Rwanda, Human Rights…) coming down the road, the last thing Starmer or Davey should want is for Johnson to be removed. He’s doing a fine job of thrashing the Conservatives all on his own.

I guess it’s all about timing. When is the optimum time before the next election to play the “new broom card” without going too soon and the electorate seeing the the new broom is just as bloody useless as the old broom?

One way or the other there’s got to be a lot of Johnson blaming at the time to try and exonerate the new broom. Does that mean the current incompetents around the Cabinet table are guilty by association (and explicit action) and an “outsider”, like Hunt, has the best chance. Or, is it time for an ambitious Cabinet member to resign, as Johnson did to May, to set themselves above the cesspool. Truss seems to have a plan (tank driving photos, furry hat outside the Kremlin, tough line with EU, etc. etc.) to position herself as Thatcher 2.0, maybe if she can find an appropriate pretext she’ll jump ship.

All very interesting to watch, though it would be more so if the Country wasn’t going to Hell in a handcart at the same time.

My money is on Hunt. He has already been very critical of the government over Covid . I think he hopes we’ve all forgotten his treatment of junior doctors and that he was the minister who discarded the pre-Covid national planning report and allowed emergency medical supplies including PPE to be run down or not replenished when they were out of date.Truss? Heaven help us.
I am keeping my fingers crossed that Johnson hangs on by his finger nails till the bitter end and that his cronies can’t disengage themselves from him.

And how much damage will he do up to that time?

Less than if they are re-elected !