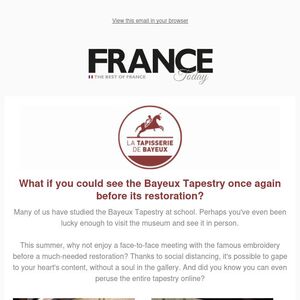 It’s worth actually seeing it “in the flesh” so to speak - no amount of online viewing can compare!

You can go see it…

I know - I plan to! Each time I go, I see something different about it. It’s an incredible object…

I still remember going to see the Reading replica of the BT during the early sixties, including the added pants.

Went to see it the first time as a 16 year old, and then took my kids to see it when they were still young enough to be impressed ! Unfortunately for me, I do prefer to look at details of things under fairly strong lighting, and of course, such old fabrics are ill-suited to bright illumination.

I tell people it’s the 8th Wonder of The World. It’s astonishing. After the first couple of metres, where the light has faded the colours of the first few turns while it was rolled up, the intensity of the colours is astounding.

I have been lucky enough to have seen it numerous times as an element of a D-Day beaches tour, when battlefield guiding. And also paying my own way several times, taking family and friends.

The whole exhibit is wonderfully well presented. The timeline of the history of north west europe in the 8/9/10/11C on the printed panels …

Then the A/V film presentation really prepares you for the tapestry itself. [The shots of the ruins of Battle Abbey prompted a remark from the g.f. that that was where she and her mates used to escape from their dormitory at Battle Abbey girls’ school and hide in the ruins ‘learning how to smoke’]

It’s years since I last went. Now I’m resident in the area, I’ll be visiting. I do hope the patisserie opposite the exit gates is still going - the strawberry tarts are to die for!

My first visit was in April 1972, I also visited a small museum nearby though I’ve no idea if it is still standing ?

Was it this one Peter?

Doesn’t look that small though!