If you use a VPN like I do, you’ve probably been through a bunch of them. They work well for a while then all of a sudden they don’t. This is especially true for streaming services.

Currently I’m using Private VPN, it’s simple to set up and you can switch easily between servers. UK, US whatever you like.

I’m happy with it for the moment at least. 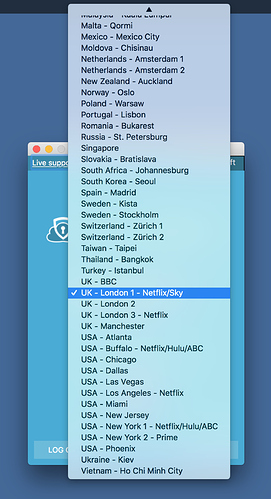 I haven’t used VPN yet.

I use Mozilla’s Firefox web browser, which isn’t a commercial browser like Google Chrome and others; Adblock Plus to winnow out the sight of ads popping up, and Duck-Duck-Go’s search engine (instead of others like Google that track everything one does)

I set the Firefox preferences so that no history is saved, and the cache storage for downloads is at 0%…

Under the Firefox prefs I also use the Tracking Protection under Privacy in the preferences, and Never Remember History…

Any thoughts on why pay for private VPN?

Here more people use their VPN to access Internet streams that are locked within the UK than to take advantage of the privacy options. To access UKTV online you need a VPN or DNS system.

Ditto though I use a DIY VPN. Works perfectly with my new TV and one advantage is that the connection just looks like my normal ISP link so no chance of the BBC realising that it is out of the country.

The downside is slightly limited speed as it will only go as fast as my uplink at home (about 8-10Mbps) but that’s plenty quick enough for video. Only the TV uses it so I’m not limited n speed for general browing.

It uses Microsoft PPTP as that was easy to set up, almost no security at all but, as noted above, security is not the main issue.

If you are worried about security be aware that browser fingerprints may well still alow tracking and some VPN’s can leak your real IP.

See https://panopticlick.eff.org/ and https://amiunique.org/ (amongst others) to see how trackable you are.

Good afternoon, We use ExPatTv as our VPN. We only really use it to access UK TV catch up and downloads.

never used one never will, i see it as piracy. While i understand some folks use it for privacy most do not and use it to essentially break the law to access things not available to them in different countries

Hi Harry - Are you saying that James is encouraging us to break the law - if so which Law is it and under what legislation here in France is such a crime proscribed.

most do not and use it to essentially break the law

using services that offer the tv channels is illegal which they do so quite allot, ie sky tv Netflix etc. While VPN’s are not in them selves illegal many companies offering third party access through it is.

Just accessing say uk normal TV for the BBC ect and you have your own TV licence then no that is legal.

If you download a programme on BBC iPlayer before you leave the UK you can watch it anywhere in the world…but due to rights agreements, you need to be in the UK to download and stream programmes or watch BBC TV channels.’

There is hope that this might change in the future though, as the corporation adds the following;

‘While we are interested in being able to allow UK licence fee payers to access BBC iPlayer when they are abroad, there are complex technical issues to resolve which we are investigating as well as legal issues outside of the EU.’

So yes if you do stream UK TV without a licence you are essentially committing an offence.

VPNs bring an additional layer of privacy to users’ online activities by masking their location.

This functionality can also be used to circumvent regional exclusives on video on-demand services like Netflix, Amazon Prime, BBC iPlayer and Hulu.

Content on these services varies between countries based on the distribution deals with the film studios and TV networks.

Netflix subscribers in the UK currently have access to a catalogue of some 2,875 films and TV series across all genres.

For comparison, those who reside in the United States have access to a catalogue of some 5,750 films and TV shows.

never used one never will, i see it as piracy. While i understand some folks use it for privacy most do not and use it to essentially break the law to access things not available to them in different countries

Well, I pay for a TV licence both in France and in the UK so I’m not clear exactly who I’m stealing form,.

well your an exception as everyone I know that used theses services have no licence, some of them use others ways to access pay per view free too.

Clearly your one of the law abiding ones.

well your an exception as everyone I know that used theses services have no licence, some of them use others ways to access pay per view free too.

Clearly your one of the law abiding ones.

I suspect that most people who are 2nd home owners but normally resident in the UK are in the same situation.

After that it gets slightly trickier - the Astra cluster on 28.2oE bathes France in a signal carrying the UK Freesat channels which can easily be received almost everywhere in the country (though with increasing difficulty the further south you go) - it might technically  be illegal to receive the signal but the chances of finding yourself in court over it are vanishingly scarce, surely?

I agree streaming services are likely to be more shady - but most people looking at, say, the ExPat TV Box web site, would conclude that it was all above board.

I am making no judgement on that as i am not fully understanding of what they offer and if they offer things like sky or netflixs without subscription or how they pay the TC licence themselves for providing the TV or if by using their services you are signing to say its your responsibility as a end user to have the relevant licences.

Most of the people i know who do have uk tv here are permanent residents of France and hold no TV licence.

Each to their own though and what they do does not bother me I Just am not doing it myself.

Hi, slightly off topic James, but my Grundig smart TV has pre-loaded apps but not one for Netflix. No problem with it in on the tablet or smartphone, but I am unable to install the Netfux app on the TV. Any ideas please?

I am struggling with PureVPN for the past 24 hours.

Any recommendations for a VPN that actually works well for BBC iPlayer & Sky Go?

I don’t use a VPN but this caught my eye some while back… can’t verify if it works with iPlayer or Sky Go, though

“The subscription-based service VPN was available on Windows, Android, and iOS until now.”

so not only Linux.

I did look at free vpn (on your advice @Mat_Davies ) but in the end I went with Nord VPN. It seems to work fine with Sky Go, haven’t tried it yet with iplayer. Only issue i have is that if I forget to disconnect, Netflix won’t cast to my TV via chromecast

Is it working today?

Yes, seems to be ok. What’s the problem?