Bill Cosby freed due to technicality 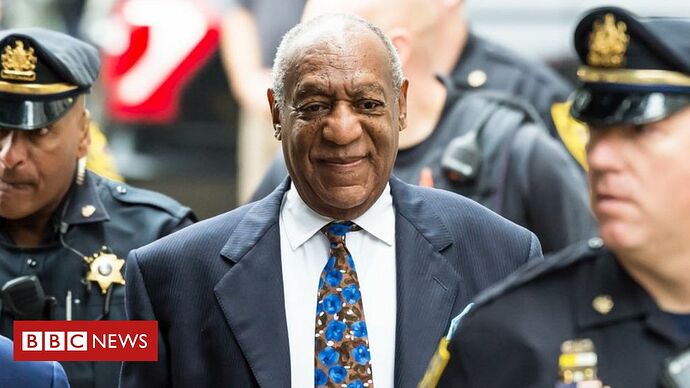 The US comedian leaves jail hours after a Pennsylvania court overturns his sexual assault conviction.

It seems enough wealth will let you get away with almost anything.

I won’t argue with that, only because I don’t know though. I didn’t follow the case but, I often wonder how difficult it must be to be thoroughly sure of a conviction when the nature of the alleged offence is so often without witnesses.

I am rather concerned though that this case all turns on a deal. I don’t know the details but how can that be right? Did he agree to admit something in return for immunity from gaol? Stinks if that is the case.

I won’t argue with that, only because I don’t know though.

OK, slight hyperbole - I’m sure that not literally  everyone in the world is aware

Apparently it does turn on a technicality, though I haven’t looked into the details yet - so, yes, it does stink a bit.

Did he agree to admit something in return for…?

I’ve removed the last bit as it wasn’t ‘immunity from jail’ as such but pretty much, yes. He admitted things in the previous civil case because the DA at the time had guaranteed him that there would be no criminal case. A new DA came in and then used those civil case admissions to charge and convict him criminally. That’s why everyone knows.

So he admitted something but now says he is not guilty?

It’s certainly not unusual for people to claim that they are so magnanimous that they will say things in a civil proceeding because the other side are such damaged individuals it will give them the release and relief… and of course money… that they need even though they are wrong and you are right. I’ve no idea if this is what has been spun in this case as I’ve not read any of his statements but as a general rule as I say it’s certainly not unusual for people who implicated themselves civilly to then effectively retract that and find some reason that paints themselves as a saint for admitting to things they now say they didn’t do to do a good deed for the other party.

The “technicality” was an agreement not to prosecute him criminally when he agreed to testify in a civil case brought by Ms Constand.

At the time Ms Constand made her allegations she was the only one, as far as I can tell. The then state prosecutor Bruce Castor did not press criminal charges. Ms Constand then sued for sexual battery and defamation, reaching a settlement with a confidentially agreement in 2006. As part of this, it seems Castor reached an agreement with Ms Constand - advised by her lawyers and in light of the expected damages - that Cosby would not be crimially prosecuted.

Almost a decade later, dozens of women came forward with similar allegations to Ms Constand’s, of drugging and assault by Mr Cosby. Most of the allegations were no longer triable, because of the statute of limitation, but they reopened the case involving Ms Constand and eventually charged Cosby days before the (12-year) limit on her allegations would have expired.

The Supreme Court seems to have had two main reasons for finding the prosecution unfair: the agreement, which Ms Constand made with full legal advice, and the fact that the later trial was tainted by all the people who came forward many years later and claimed to have suffered the same thing, but whose cases were time-barred and who, presumably, did not follow the civil route.

As others have said, “everyone knows what he did” - and perhaps they do. This most recent decision is more about propriety and fairness than about what he did.

Thank you Stevie, I now understand perfectly and, as a result can see why they reached the decision they did, however unpalatable.

But it does emphasise the need for people to report such things straight away, though I do understand why they may decide not to.

What’s in the public good?