We are planning an 11 hours trip for Christmas and wish to take our cat with us. She has never traveled further than the vets office, so I'm a little bit afraid she won't like it. Do you have any experience with travelling with cats? Any tips in case she really doesn't like it? Thanks!

Oh I will get the hang of this, I meant to put Tara kittie on my comment itself. She says take some ham with you for stop off treats. Make sure kittie has water. I brought two to France from the Uk with me and it was a really hot day but they coped really well. They seemed to know it was a special trip and not a vet trip :) 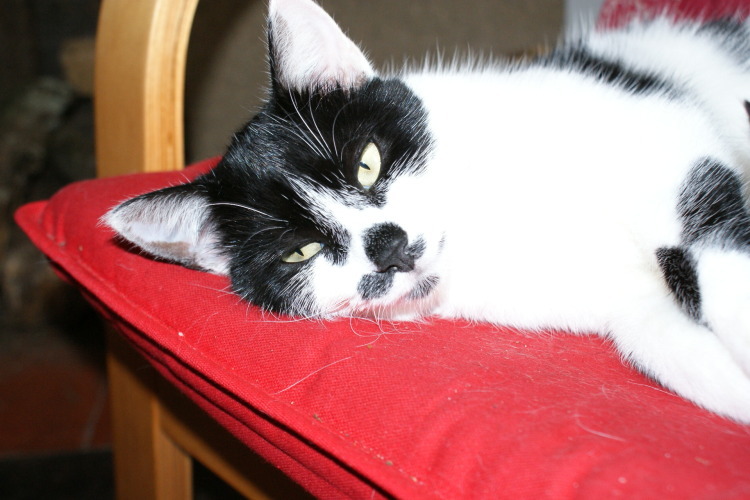 I have regularly brought my cats from Newcastle to Pyrenees Atlantiques. We have a night’s stop off in Bicester and then cross via the tunnel.

I have a dog cage and a small carrier inside which houses both cats ( one inside and one lying on top), a litter tray and a double bowl with dry food and water. One of my cats is happy to hop out on her harness and stretch her legs at service stations but the Tom is far too afraid.

I have tried half a sedative tablet each but in all honesty it doesn’t make a lot of difference. We have howling for the first hour on our way to Bicester but they then settle down.

Hopefully our definitive move will go just as well in January.

When I used to travel with my cat in a basket from Gloucester to London and back once a month, hitching, years and years ago, I got tranquilisers from the vet which calmed her down and I had no problems with her.

We have a very timid cat, howled all the way to the UK, when we returned a year later she managed to over turn her cat bag - and went to sleep. I righted her when we came to the next motorway services and off she went again with the howling, so I covered her bag with a blanket and not a peek from Caan to home. Both of our cats seem to be happier on the longer ferry crossing with less time in the car (I think it is the throbbing of the engines). My OH has the best idea, he drives the van I and I get the car complete with cats - says it is for my comfort, not so sure after 4 hours of the cats chorus. Even with the stress of the journey both cats are settled within minutes of getting home. One thing I would say is make sure that the vet fills in the passport correctly - we had a very stressful half hour at the port getting another vet to verify the stamps that had been put into the wrong page.

Good luck, but please make absolutely sure that you keep windows and doors closed at all times when you let her out of her cat carrier!I’d rather just leave her in it during the whole trip. I’ve heard of too many heartbreaking stories of cats that got lost at highway stops etc.

Thanks for your tips and stories! Yes, our cat uses a litter tray and we will bring dry food and water. I expect (and hope!) her to be very noisy as long as she's in the cat carrier and then will go off to sleep soundly on the back seat when we take her out. If any funny things happen, I'll let you know! ;-)

I for one am really enjoying the stories your post is prompting, Marielle! :-)

When we moved here the removal company brought all our worldly goods in a massive removal lorry but we (my husband, daughter,then age 10 and i drove here from Cumbria in the north west of England to Gers in the south west of France, in our car with our Golden Retriever, our Guinea pig and our cat. We brought the guinea pig in a cat carrier and bought a bigger travelling case for the cat which more or less filled the boot, we put a litter tray in one side and his bed on the other side. Within about 10 minutes of setting off the cat had managed to open the zip and get out of the carrier and jump around the car. We put him back in and improvised joining the zips together so he couldn't get out, to say he howled was an understatement!!

We'd bought the carrier a month or so before hand and had it in the lounge with his toys in it and he played in it loads, just not in the car! Total waste of money.

So we got him out, put his harness & lead on him (just in case) and he spent the 2 days of the journey sprawled out contentedly on the back seat between our daughter and the dog. He wouldn't use his litter tray when we stopped for breaks all day (i was too nervous to walk him on his harness at service stations just in case) until we stopped in a motel overnight then he had a mad half hour running round the hotel room before settling down.

We moved our 3 cats from Germany to France (8 hours in the car)without any problems. They were as good as gold and we didn’t hear a sound. The same when we adopted 2 cats and brought them from the Dordogne to Lyon (6 hours). I would say it depends very much on the cat.If you are worried you could ask your vet for Calmivet. This is a tranquilizer which calms cats up to 8 hours.

My cat is the world's best feline traveller (41 round trips Northamptonshire to Picardie to date), but that's just her - still, I always make sure I have dry food and water available for her (in covered bowls so easy to access) and, most importantly, a litter tray! I doubt any cat could survive an 11-hour trip without a 'comfort break'. Is your cat used to a litter tray? Or maybe get her used to a harness and lead (not much time, mind you) so that you can take her safely out of the car. If she's anything like mine, she will signal her needs well in advance by starting to paw what she's sitting on in that familiar digging manner!

Catnip? We never travelled long distances with our cat in the car, but if she was given just one whiff of catnip she would almost go comatose!

We had a similar experience to Pam -
minus dog & guinea pig but plus one cat. We recently moved to Arques - a small village in the Haute Valee de L’Aude from North West Essex. I did lots of research on the “best “ , as in least stressful, way to transport our two very aged (13 & 14) felines one of whom has kidney failure but has outlived her prognosis by almost 2 years. We too bought a fabric carrier (actually big enough for a large dog) which took up almost all of the back seat. We thought it would be more comfortable than the large “crates” and would prevent stray paws from wrecking the upholstery! Our cats had happily slept in it in our living room and we did as google (& our vet ) recommended and kept familiar smelling cat blankets etc in it and took them for rides out to acclimatise them to going for a journey that didn’t end up at the vets. We even sprayed it with Feliway. All I can say is none of the “experts “ have ever tried any of their tips or if they have they have yet to encounter more devious scallywags than our two. I leave you with my husband’s (I think) hilarious description of our overnight journey down. We and our cats survived to tell the (no pun intended ) tale and they now spend their days happily snoozing in their new home surrounded by familiar furniture with lots of new places to explore.
“So it was with a mixture of sadness, trepidation & excitement that we made the 22 hour drive down on Wednesday/Thursday with a car packed full of gin & cats - those 2 b*****s are the reason it took 22 hours not 15! Despite having purchased a dog carrier that they could both comfortably sleep in with blankets, food bowls & a litter tray Coco decided 3 times to prove herself worthy of cat Mensa and worked out how to undo the zips and lead herself & Mia on the Great Escape! Scarily on one of these escapades Mia also managed to undo the back window and with the wind in her fur briefly resembled a feline Thelma or Louise. Luckily a disaster was averted, Mia saw sense, Coco sat (& pooed) on my lap, and after numerous litter tray, drinking water and sleep stops we made it here safely. Coco seems to have settled in really quickly, Mia seems determined not to make an effort and won’t budge much further than the chair she’s sitting on.”

It is the “dirty protests” that our previous cats have always managed on even the shortest of journeys, that have put me off bringing a cat from UK, we are going to delay getting a couple of kittens until we arrive.

To be honest Coco didn’t actually commit a “dirty protest”. She suffers with IBD as well as her renal problems and we often have to deal with the “consequences “. Sadly there’s no one cure for it and she was obviously under stress so it flared up. There was no way we could’ve left her (or Mia ) behind and although the journey was somewhat strained they settled down and slept after the Thelma & Louise incident. They’re as much a part of our family as we are, the journey down is now all but forgotten and now they have settled down into their usual routine - sleeping during most of the day and taking over our bed at night ! They are however enjoying our little courtyard garden. After losing 3 cats to the “great outdoors” we decided to keep these two as strictly indoor cats. They’ve been perfectly fine with that - one is a loveable cuddlable Burmese , the other a snow spotted Bengal with a slightly snooty demeanour. They do however like patrolling the little courtyard in the warm sunshine and laying in the sunlight on the mezzanine . If I get a second chance I’m coming back as a pedigree cat in the S of France😂

When we brought our cat here from the UK, we used a large dog cage so he would have plenty of room. He had his bed, a travelling water bowl (which doesn’t spill) and a litter tray. Once in the car, I put a white bed sheet over the top, hoping to keep him calmer. As it was sunny, that helped to keep him cool. Every couple of hours we stopped and made a fuss of him, giving him a few treats. It was a bit of a worry, as he was about 14 years old at the time, but he made it here and lasted for a couple more years having a nice retirement in our big garden with no local bullying cats to worry about!
Good luck.