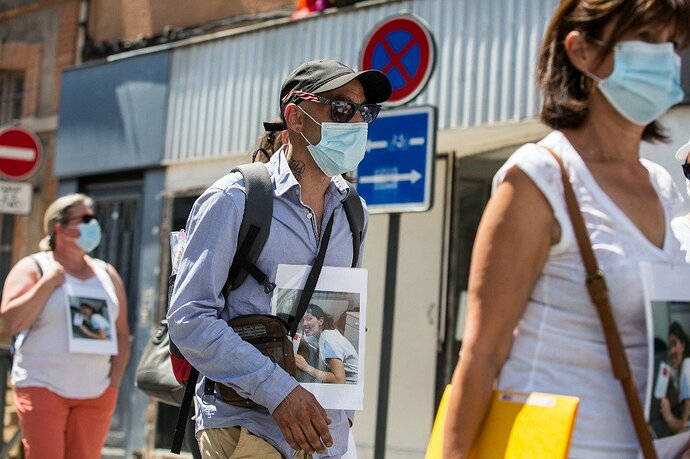 My neck of the woods, ridden past the house, it’s what everybody’s been waiting for/expecting. Very sad. It’ll be all over the front page, we won’t bé talking about much else in the shop tomorrow.

Their house is to the back of me a couple of kms away. When they searched the woods before Christmas the wild boar were driven out and one or two ended up in my back garden ! I was not a happy bunny as their traces are still there !
Everyone near me have been waiting for the arrest and you know what local gossip is like…the hubby was a condemned man the day she disappeared. No benefit of the doubt around these parts !

the hubby was a condemned man the day she disappeared. No benefit of the doubt around these parts

It has taken 6 months, and in cases like these I’m afraid the husband is very often the perpetrator so hardly surprising he should be a suspect.

Good work from the Brigade de Recherche of the Gendarmerie and the 2 juges d’instruction (investigating judges) who, in the absence of any evidence, DNA etc., set a few traps to make Cédric Jubillar drop his guard, and it seems to have paid off (eg giving him 6 weeks ago the status of “partie civile” – plaintiff – could have lulled him into a false sense of security, it seems to have done the trick. All phones were tapped of course and according to Europe 1 this morning bits of convos with his mother & other rellies, and possibly a photo, were enough for the Gendarmes to put him, and his mother, in police custody under the GAV procedure). There was the notorious Affaire Viguier in that area in the 2000s, a similar scenario, and, well, the husband was acquitted (IMO he got away with murder, literally), so maybe they learnt from it.

Children of Jacques Viguier, law professor and fan of Alfred Hitchcock films accused of killing his wife, proclaim their belief in his innocence

*Former students recall that Jacques Viguier, a brilliant law professor, liked to engage them in a debate about whether the perfect murder existed. That was before the academic, a fan of Alfred Hitchcock films, was accused of killing his wife. For a decade the case, revolving around a missing mattress, a set of keys and tales of adultery and deceit, has held France in the same suspense as a Hitchcock murder story. The acquittal of the professor yesterday at the end of a second trial has left intact the mystery of what happened to Suzanne Viguier.](Murder case of cheating wife and missing mattress grips France | The Sunday Times)

2 investigating judges here in this Jubillar case, it’s not unusual but still fairly rare (usually a main one with the secondary one sort of checking stuff and acting as a sounding board), that’s fairly new, and increasingly used. That law was voted in 2007 post debacle of the Outreau case (it didn’t help the hysteria in the dreadful Outreau scenario that the nearby Marc Dutroux case, in Belgium, was in full flow when Outreau broke out). Outreau sparked the judicial authorities to look into establishing a “collégialité de l’instruction” (i.e having up to 3 investigating judges in major cases) although budget restrictions (collegiality of decision = training and hiring hundreds more judges every year), as well as a 2016 amendment to the 2007 law somewhat kiboshed the collegiality principle. But for major cases they tend to appoint 2 examining judges (it’s called a “co-saisine”, several judges working on the same case).

A couple of other measures implemented since Outreau have helped minimise the risk of such clusterfuck reoccuring on the same scale, in part. the modification of Article 184 of the Code Pénal, forcing judges to clearly list in the ruling both the élements à charge and à décharge (the incriminating and exculpatory evidence) at the end of their investigation, before sending the file to the public prosecutor and the defendant (and, if need be, to the lawyers).

Their house is to the back of me a couple of kms away. When they searched the woods before Christmas the wild boar were driven out and one or two ended up in my back garden ! I was not a happy bunny as their traces are still there !
Everyone near me have been waiting for the arrest and you know what local gossip is like…the hubby was a condemned man the day she disappeared. No benefit of the doubt around these parts !

On paper you’re right Peter about the benefit of the doubt but it’s been very difficult to see beyond the husband in this case. It soon became clear that the facts overwhelming pointed to him, no hard evidence but there was indeed a solid “faisceau d’indices” (a welter of incriminating clues) going against him from the start.

Her sudden disappearance was downright odd for starters. Her husband said that she went out to walk the dogs at about 11pm (in mid-December) and never came back (the 2 dogs did, on their own), he only realised that at 4am. It can happen of course, it must be extremely rare in rural France to be kidnapped and murdered by a stranger in the dead of a winter’s night and for the body not to be found, but it’s in the realms of possibility, anything is really. In the late 1970s for instance, there was a murderer nicknamed “Le Tueur de l’Oise” around Chantilly, 25 miles north of central Paris, who killed and assaulted women, well, it turned out that this Tueur de l’Oise was a young Gendarme from a local brigade, one Alain Lamarre, au-dessus de tout soupçon apparently…

But had it been a roaming criminal, her body would probably have been found. Yet, the many search parties organised came a cropper, a couple of them involved over 1,500 volunteers (“des battues citoyennes” as they’re called).

There was talk of an online relationship that Delphine had with a man, confirmed by her female friends, some sort of confidant whom she opened up to (the online friend was interviewed by the Gendarmes and quickly disculpé, exonerated/eliminated from enquiries; over 100 people have been formally interviewed as a matter of fact, mostly locals with a police record of a sexual nature).

The Jubillars were in the process of divorcing, and by all accounts tension was rife between them for 6 months, the husband having problems to accept the divorce and most probably the loss of custody of their two young children.

I don’t know if anyone remembers Lynn Russell and her two daughters who were murdered in the UK. Lynn and her husband Shaun lived about 100yds away from us in Wales and were friends. Shaun was put under great pressure after the event and it was only CTV fottage from shops where he was that afternoon amongst other facts which took him off the hook. The police have their job to do and in this Jubillar case, they seem to have done very well. The expression ‘give them enough rope and they’ll hang themselves’ seems to apply here.

One of the daughters actually survived, damaged but alive. Horrible story, I remember it well.