That was quite a week, that was. Well, I woke up this morning... Thursday morning, in fact, to find that I had been unveiled as the new manager of the English women's football team. Somehow, I managed to miss my interview on Radio 4's morning news programme.

It all could have been quite serendipitous. Only the other day, I was wondering whether my gainful work as an instructional designer had run its natural course. Was it time perhaps for a new career, even at my advanced age?

I confess that I was rather excited by the prospect of taking on a team of fit women and turning them into a crack unit of winners. (Unlike their male contemporaries.) With some interesting training techniques up my sleeve to try out, I was itching to get stuck in, so to speak. I even received from pals several offers of help with the physiotherapeutic side of the role. One, in particular, even went to the trouble of acquiring an online massage qualification in order to jump the queue. I had to temper his enthusiasm by questioning his practical experience with a magic sponge. ![](upload://3gcFFBeqrh1LawoiJYP57oe3Ocw.jpg)

One thing's for sure, 'affable and friendly' I might be, but as the BBC sports page pointed out, I am 'not to be messed with'. Mark Sampson is definitely his own man. When it came to allocating the support roles, favouritism would not come into the equation. For example, I'm on good terms with a few plumbers in the area. They're good enough at their trade, but imagine if there was a problem with the showers at the end of a gruelling international. Could I count on them to remedy the problem on the spot, or would they engage in the usual shilly-shallying one associates (alas) with plumbers? No, I realised that the only person suitable for the job was... Guildford's favourite plumber, my brother.

In the cold light of the following day, however, I realised that a certain conflict of interest was colouring my credentials. I couldn't quite put my hand on my heart and say that I was going into this new venture in entirely the right, purely sporting, spirit. So, with rather less brouhaha, I thanked the powers for the offer and tendered my resignation. Reporters are even now clamouring at my door, hoping for some kind of indiscrete statement to fan the flames.

Never mind... It would have been an all-consuming role. Deep down, I knew that there wouldn't be time for my book-making career in tandem. Only this week, after an agonising Sunday wrestling with formatting, I uploaded my book of our grand design to Amazon's Kindle platform. After almost ten years in gestation, and thwarted up until now by the commercial considerations of traditional publishing houses, it was a liberating experience to get it all down on paper. Well, a computer screen; I never cared for carbon paper. Bloody Murder On The Dog's Meadow is less about construction and more about the de-construction of family life during our year of living dangerously close to the edge. I don't know if one can put a download in a Christmas stocking, but I'm hoping that it's priced so modestly that it might serve as a last-minute universal 'tree present', as my grandma used to label her more minor gifts. 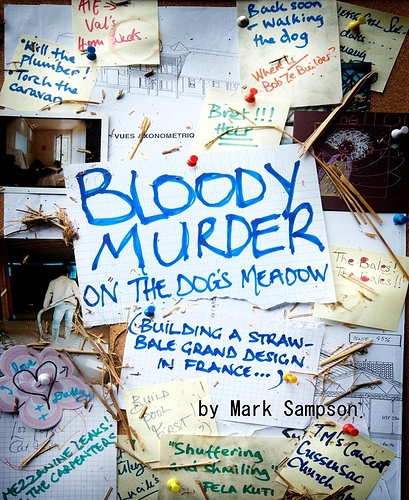 So… if readers would care to go there and fork out three bucks or so for what Stephen Fry has already called ‘an entertaining read’, and then, if they like it sufficiently well, post a glowing review on said Amazonian platform, who knows? In my wildest dreams, it will become a succés d’estime and supplement my retirement. I’ve already received a royalty payment of £1.82. Dream hard enough and the sky is surely the limit.

Flushed with a sense of achievement, I took time off from the daily grind to go Christmas shopping with the Good Wife of Brive la Gaillarde. Around the church in the centre of the old town, they’ve put up some of those market stalls that look like self-assemble sheds from Monsieur Bricolage. One of them was womanned by a woman in a smart coat from the Dordogne selling double jazz CDs illustrated by some celebrated French cartoonist. They were overpriced, but I was tempted by a Ben Webster compilation for a friend who likes Duke Ellington’s finest tenorman.

We got talking and she congratulated me for and then corrected my French. She talked about all les anglais in the Dordogne (living in the department and not floundering in the river) and I recognised the patter of a crypto-racist. The ones who hide behind a painted smile. It all came out: don’t speak the language, stick to themselves, bring supplies in from the UK, blah blah blah. She had English neighbours, she told me with a certain faux-liberal pride, and I sensed that she’d be the sort to sell them down river as soon as Marie Le Pen’s xenophobic foot soldiers start sniffing easy prey. It was with great pleasure that I was able to point out that London is now the sixth biggest French city and then witness the genuine surprise that masked the painted smile. Had I had my wits about me, I would have asked her whether she had ever tried to live in a foreign land, far from all that’s safe and familiar, and then suggested that ? in the words of the song ? she tried to walk a mile in my shoes before rushing to judgement.

Readers, I bought not a one of her CD coffrets.

My week ends with the return of our prodigal daughter. She rides in on Saturday afternoon on the 10.10 from Paris, or whatever time it leaves the Gare d’Austerlitz. Two whole weeks of Christmas en famille. What fun, what bliss. Myrtle can go back to sleeping on The Kid’s bed. Once the commercial mayhem has abated, we can settle down to chestnuts roasting on an open fire and some of the films I have been assiduously burning onto DVD.

I hope you’ve noticed how I’ve used words like ‘platform’ and ‘burning’ in their modern sense. I am the very model of a modern major-domo ? but not so modern that I cannot raise a cup of sack and wish ye all a very merry Christmas and a most happy and prosperous new year.

Mark, I have the habit of writing things, reading them and then throwing them out or pressing the delete button. I did upload your book on my kindle and it's next in line on my reading list. I couldn't help but take a peek the first few pages and I can't wait to see how your straw house adventure continues. I've been dreaming for years of taking the house building leap and maybe straw is the answer. Wishing you and your family much happiness !

I can't seem to find your comment, Susan, but thank you so much for downloading mein Buch. I hope you enjoy it and I wish you heaps of good fortune in the coming year.

Jane, you're a 'lil' darlin''. Thank you so much - and have yourself a merry little Christmas, while you're at it. Peace on earth and good will to all creatures - except hunters!

Maybe I have been a bit slow, it I didn’t realise that you were “that” Mark Sampson!
The straw builder I mean of course. I will download the book when I get up.