We have a bucket in the shower….usually gets us 5 litres a shower. Most plants don’t mind a bit of soap…

good against greenfly and other aphids etc…

Image from the link above… 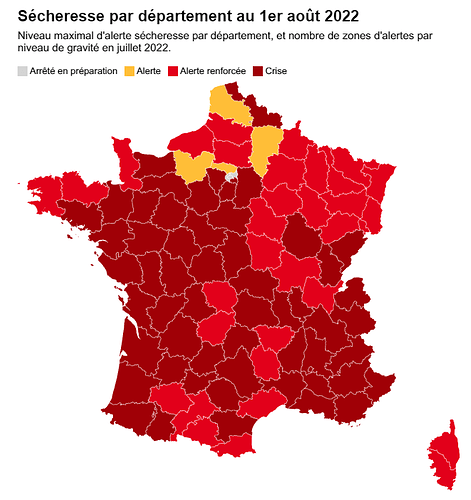 I reckon that we need to start switching to plants that do not require so much water.
Here is a list of 15 drought tolerant plants to get you started. Top 15 Drought Tolerant Plants That Can Handle Dry Weather

reckon that we need to start switching to plants that do not require so much water.

The issue with many parts of France is that you need drought tolerant plants for 7 months of the year, and ones that tolerate damp cold conditions the rest of the time.

The classic drought tolerant plants, often garrigue species, can’t cope. The only one on that list that is a total toughy is perovskia. Oh and portolacca - but does one really want a garden full of it?

Since last winter my sink and shower water has been diverted to trees (winter) and smaller trees (spring and summer) and the 1 or 2 plants I have (summer). It started as an accident, but for now I’m planning on continuing. It was really helpful to the younger trees - my partner hadn’t been getting any to thrive before.

I follow Stella’s example and as well as training the cats to drink more water I’ve put a couple of extra dishes of water out for other animals. I top these up with fresh water morning, early afternoon and night. They are always empty in the morning.

Thank heavens I never got around to starting a vegetable garden this year.

I’ve put a couple of extra dishes of water out for other animals. I top these up with fresh water morning, early afternoon and night. They are always empty in the morning.

Dordogne en crise I see, not at all surprised, yesterday was enfer but I resisted the clim. I don’t need to save or divert because my garden is almost entirely natural and everything that grows there naturally is obviously drought resistent. The only tree I planted was the, now more than 30 feet high, eucalyptus and, is certainly happy with the conditions. No Koalas in it though.

I agree Karen. I deliberately decided not too early on - I could see how quickly our underground water tank was emptying. I’m hugely relieved that I did.
Whole sections of the garden are not touched - if stuff dies, so be it. Any water we use is for pots round the gite and along our terrace.
As there are only two of us we almost never use the dish washer, so all washing up is in a bowl and then tipped on plants.
I was thinking yesterday about putting a bucket in the shower - thanks @JaneJones for confirming that’s a good idea.
I’m amazed how well our roses are doing with no watering. Mind you, they love our clay and do well here anyway. They have an awful dip at the end of June into July but are now coming back into flower.
Oleanders doing splendidly and something called “marvel of peru” which just planted itself. In fact I’ll take a photo. They look lovely at this time of day.
I agree with @JaneJones - the challenge is likely to be long droughts in summer and then too much rain for a month or two (hopefully! At least I can capture it) in winter for drought loving plants to cope.
I have five water butts round the house - all empty bar one. But what is key for me is the underground water tank by the cottage, installed when they restored the cottage. It take all the water from the cottage roof. Importantly, with heavy rain I open up the house water butt taps and run hose pipes down to the tank, which can collect far more water than the butts themselves. It always frustrates me when I see good rain water pouring off the roof, more than the butts can capture. Sadly, the underground tank has been empty for weeks.

Since last winter my sink and shower water has been diverted to trees (winter) and smaller trees (spring and summer) and the 1 or 2 plants I have (summer). It started as an accident, but for now I’m planning on continuing

Can I ask Karen how your system works? It sounds a really good idea. Do you store the water first? Or does it go straight onto the plants?

How do you do that?

The only ways I can think of with ours involve leaving a full watering can around, letting him drink from the wine cooler and leaving toilet seat lids up (that last one’s a bit too gross!)

Anyone know whether a total ban means you can’t even draw water into a watering can?

All of these are doing well - just taken these photos. 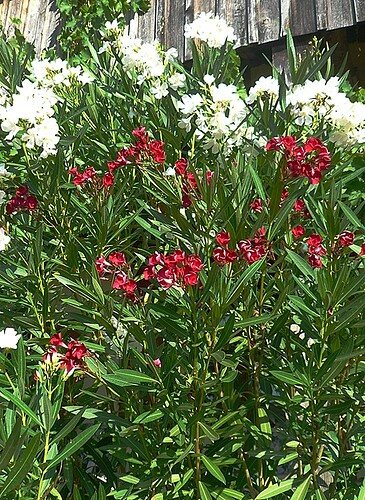 Marvel of Peru with a campsis 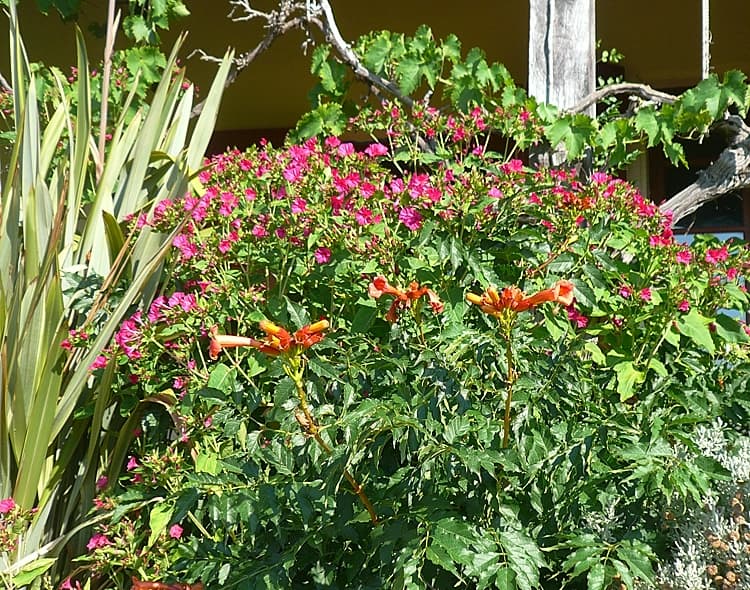 Roses by the pool - no idea what type. They were here when we bought the house. They have not been watered at all through the entire drought. 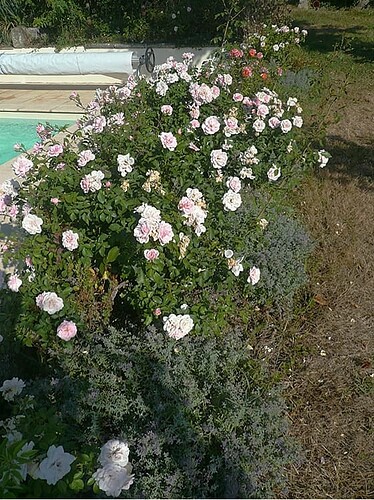 …
Not for flowers/lawns etc etc… No washing the cars, not even at the wash-stations.
the list goes on and does depend on the local rules. The Mairie should be able to tell anyone who asks…
Advice is to use water sparingly when washing/washing-up… likewise laundry…
the list is not exhaustive

A graceful tree, but I when first lived in S Africa’s dry Eastern Cape province I was surprised to see whole hillsides being cleared of alien Australian species like eucalyptus and black wattle. This was because their introduction had dramatically lowered the water table and in several different ways they were leading to the decline of indigenous species. Surprisingly within a couple of years, long dry streams were running again (at least in winter!).

[quote=“Robert_Hodge, post:5, topic:40426”]
I reckon that we need to start switching to plants that do not require so much water.

Over my years in SA, I created a large, ‘waterwise’ garden of indigenous succulents, mainly large aloes that never needed any watering. Instead, like traffic lights, they’d just go from green to orange to red as the summer progressed.

Here, I lost a mature fig tree during the last winter, when it’s leaves failed to appear, I noticed that the tree had actually started to split. It had never before needed watering during the winter, but it seems a lack of water was the cause of its demise. One unfortunate consequence has been the loss of its shade and now everything that grew around it is frazzled.

The only things in the garden that get full sun and are coping are Mediterranean species, - olive, cypress, oleander and jasmine. Was surprised to see that the tarragon is performing much better than the rosemary bushes. And then there are the vines that would cover everything if left unpruned. Unfortunately they’re not table grapes. 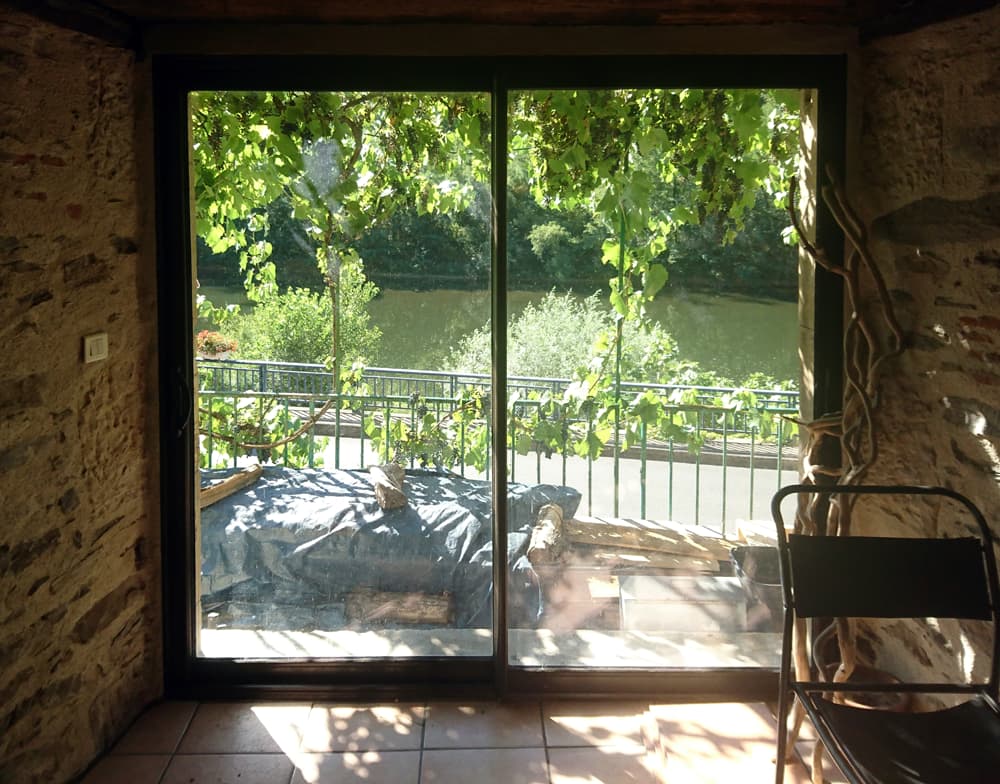 Still plenty of water in the Lot, just across the road, but bit of a schlepp to fill the watering can there.

Anyone know whether a total ban means you can’t even draw water into a watering can?

Might be different with you. Here we are not allowed to water any part of garden (except potager) with water from the network ie taps or local fountains connected to the network. The potager only between 8pm and 8am.

We do have a fountain that is not connected to the network, so everyone is fighting over the tiny amount of water flowing into it.

plenty of water in the Lot, just across the road, but bit of a schlepp to fill the watering can there

Here it is forbidden to take water out of any natural source - lake, river, source. Water levels are just too low.

I had a break in drainage system just outside the house. It’s not underground at that point. So as it was winter and miserable weather I just put in a temporary connection to a series of containers. Obvs they needed to be emptied every day or two depending on volume abs weather temp (and containers kept clean). I lasted 3 days emptying manually where it would have gone ro previously. Then realised this is water why waste it take the opportunity to divert it to where water will be needed especially in summer.

To avoid risk of later freezes, as it waa still winter, bigger trees got it when freezes to come were still a risk. Then smaller trees to build up their water reservoir when no longer any freeze risk (those are the trees that are now thriving, and still thriving so far in the drought, that OH planted and didn’t thrive). It is amazing the difference a few half-barrels of water put there in the winter has made even in our historically not-too-harsh climate. In summer the plants get it first, in the evening only. Then a youngish tree in a key location I want to make sure survives, then the rest.

When I get around to mending it am going to think about whether to keep it flexible so that it can still be diverted for plants. Standard sewage for shower water, especially, and sink water seems such a waste.

Frankly every citizen is being asked to be reasonable and responsible… during the drought.

Must be difficult for folk with swimming pools, which are surely losing water through evaporation with this heat… how many have been covered-over and closed-down for the duration, I’m wondering…