EDF and a ridiculous Tableau du Bord on my online account

I have an ongoing issue with EDF (and Enedis) with regard to a 2021 estimation because they would not accept my readings (Enedis having arrived the day after they said they would) and the EDF advisor last October telling me to send in my readings in February of this year, I did this and they would not accept them. My daughter took a photo of them and we sent that in. It was accepted and then all withdrawals from the bank stopped. I contacted EDF on the English helpline. They were prompt and said by email that they had stopped drawing payments as Enedis had over estimated. I was then sent a new payment plan and told that a not insignificant amount would be paid into my bank account.

It did not appear and I looked at the Tableau Du Bord to see that yes the photographed readings had been accepted however the estimated reading for 2021 was 24,874 euros and that an estimate for 1 January 2022 to 26 Juin was 53,406E) (given the fact that the real reading was for 2020 1,061E I found this rather incredible).

I spoke to the English helpline again on Monday 28 June and the advisor had me wait until she spoke to Enedis who would not speak to me. She asked me to contact serviceclient@edf.fr with all the relevant paperwork. However I have contacted the person who said everything was now okay in February with just a copy of the Tableau du Bord showing these ridiculous figures. I have been sent an email in response to tell me that someone will be in touch with me within 2 days. I just need to make provision for a non reliable response as it is worrying me because the Tableau du Bord does not make sense does not mean it that it will not cause further problems.

So: a) has anyone else suffered this sort of fate and what was the outcome and
b) does anyone have the name and telephone number of someone they have used for such issues with success, who can speak English and French and if so could they please send me their details.

Maison Service will not take on Enedis and a friend of mine was advised to go to a jurist hence the fact that I have contacted EDF directly again.

Have you considered/been offered a Linky smart meter?

Linky: the Smart Meter for electricity in France

Do you want to know more about the Linky meter in France? Find out everything you need to know about this smart meter, including why they're being deployed, prices, health risks, and more.

We no longer have to resort to going down to the meter in the street to read the numbers, they are sent automatically over the power lines.
Further, we don’t pay for our electricity on estimated bases, we pay the bill by DD when it is presented. That avoids the electricity company holding our money in advance - far better that the money is in our Bank, not theirs. You know you have to pay the bills, so budget in advance based on your usage history.
May be worth while speaking to your counsellor at EDF to see if this can be arranged.

I have not considered a smart meter due to the fact that my meter is downstairs, also due to the fact that I pay my bills monthly from my bank account based on actual readings given once a year as agreed with EDF. As otherwise I would be charged a sum for not doing so. However your response does not answer my question with regard to the remarkable imagination applied on the Tableau du Bord that a householder with only 4 occupants could potentially use 8,901Euros worth of electricity in a 6 month period 3 months of which are warmer weather and they having said they accepted my photographed readings in February of this year. Given the comment with being able to budget in advance based on my usage history I always budget according to what I see I have used but it seems that EDF do not have the capacity to be accurate.

Thank you for your input.

but that’s my very point… with a Linky, the readings are taken on a more timely basis in real time and without your intervention.
It’s also possible to track your daily usage which could point to any issues developing.

I do check my readings daily hence I know that EDF are wrong. The government knows that EDF and Enedis act incorrectly with their clients and have taken issue with them. That is not my complaint, my complaint is based on the fact that the right hand does not know what the left hand is doing in the organisation and that is both inefficient and worrying. Why should I trust Enedis to be correct and also who is installing these meters.

and also who is installing these meters.

Linky meters are smart meters, currently being deployed nationwide in France by French power grid operator Enedis. Find out everything you need to know about the Linky meter in France in our guide.

Do not take this as an insult to your intelligence, I am only suggesting it because it is the kind of mistake I have been known to make, but you are sure that the figures you are looking at on your dashboard are in euros and not in kW?

Thank you I did double check it is most definitely in Euros. The kW is incredibly high. I did not take it as an insult.

Thank you but I have read this link before now and quite frankly it is precisely as it is being supplied by Enedis (or their subcontractors) that I have no trust in their accuracy, and if their inability to understand that a domestic user does not use 8901E worth of electricity in one month then I do not feel I am unduly suspicious.

That E is estimated, not euros? 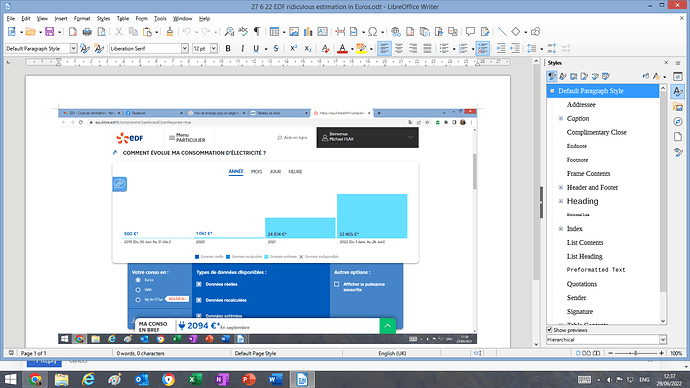 Sadly, it is not exactly unknown for computerised systems here in France to simply fail to function. May I suggest that you simply ignore the obviously erroneous online system and deal with your electricity provider by means of pen and paper, with all letters sent ‘Recommande avec Avis de Reception’. Keep a copy of all correspondence, and also send them printed copies of photos of the true meter readings. If they owe you money, then do not pay them any more until such time as your credit is used up. Insist on being sent a good old fashioned printed paper bill. The bill will show the breakdown of the cost of the electricity used, and from that you will be able to calculate what you do really owe them.
Yes, it is a nuisance, and No, you shouldn’t have to go to such lengths, but at the end of the day France is rather old fashioned when it comes to book-keeping in that it is paper that rules the day.
Try sending a formal letter of complaint to your electricity provider. Often such a letter will bear fruit as it shows that you really mean what you say and will not be fobbed off.
If your command of French language is a bit wanting for such a task, then use an online translator such as Deepl.com and if you keep your English sentences short and succinct it will work wonders for you.
At the end of the day just remember that what the online system says is just a customer service gimmick. It’s the paper bill that rules the day.

It’s the paper bill that rules the day.

The paper bill is downloadable from your account with EDF using the Mes factures tab. All my EDF bills are obtained this way - none by post.
The format of the downloadable pdf is exactly the same as the paper bill.

I thank you for your input.