I have recently noticed that there are so many G rated TV’s on the market!
I only saw two A rated ones today among 12/15 others! Is this something new?

Hi Lily, I was wondering about this too, because I just bought a monitor and was surprised to find it had a G rating.
I just found this explanation… 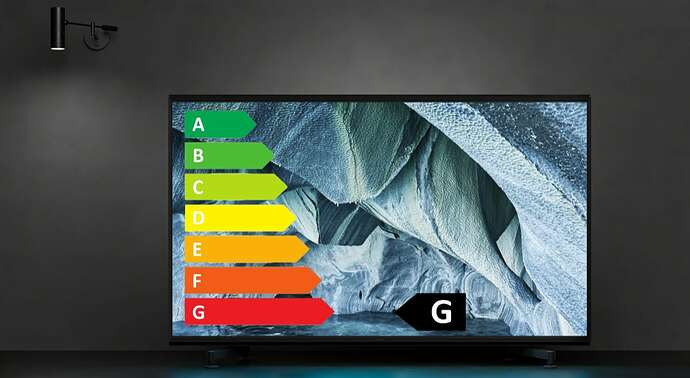 New TV energy labels: Before and after

Your TV is now rated worst of the worst, energy class G

Basically yes - the ratings were changed.

As I understand it (and this is from memory from an article I read so may be only vaguely accurate) on the 1st of March of this year the EU changed the rating scheme, basically made it much stricter than it was before, and whereas before a TV could use like 100w of power and be A rated, now an A rating must be under 20W or something which is very unlikely for current TVs so almost all are around the lowest rating, I assume with the idea that it will push manufacturers to focus on improving energy efficiency so they can get a better ranking than most. I guess when most get an A, as a consumer you think ‘well, I’ve got the best’ and that’s where it stays, the incentive is gone to find even better ones, whereas now in a sea of G’s, a D will really mean something, and as most people from school think A-C are the ‘good grades’ they hope manufacturers will really push themselves to get up into the top half of the table.

Our newish TV came with 2 stickers, an A and perhaps a G, and it made me curious why there were 2 and why wildly different hence me googling and finding the article.

Silly EU, what will they police next?
Not swimming pools, oh no, the biggest energy consumer in the house (except mine and a few others I converted) min 8x more electricity than a tv and could be 20x as much per hour and the pools run a lot longer than a tv so min double those figures.

How did you convert the swimming pool pumps to use less power? I was under the impression that old single speed motors couldn’t be retrofitted with speed controllers.

Getting back to TVs - unless you unplug yours when not in use, the standby power consumption is the most important energy figure to look at.

Most of the flat panels after plasma use very little on standby, certainly nothing to worry about.

I have used all sorts of methods to control pool pumps from more efficient permanent magnet motor pumps to inverter drives but it isnt just a pump, it is making the system more efficient by removing friction generating parts.

I’ve no idea, but from the comments on the link you provided it seems it’s 8Ks that have a problem. I’m not sure why 8Ks exist, as to the best of my knowledge the Mk 1 human eyeball can’t see the difference between 4K and 8K pixels. People must be putting screens in the same size as their of their walls. I was an early adopter of 4K (an expensive exercise at the time) in a 55" which has a stunning picture and I’ve no intention of “upgrading”. If it only uses 110 watts then I think that’s fine.

As the old eyeballs age I do now appreciate the quality of our desktops and laptops though - but as this article explains more isn’t necessarily better. It depends on the application (not as in App